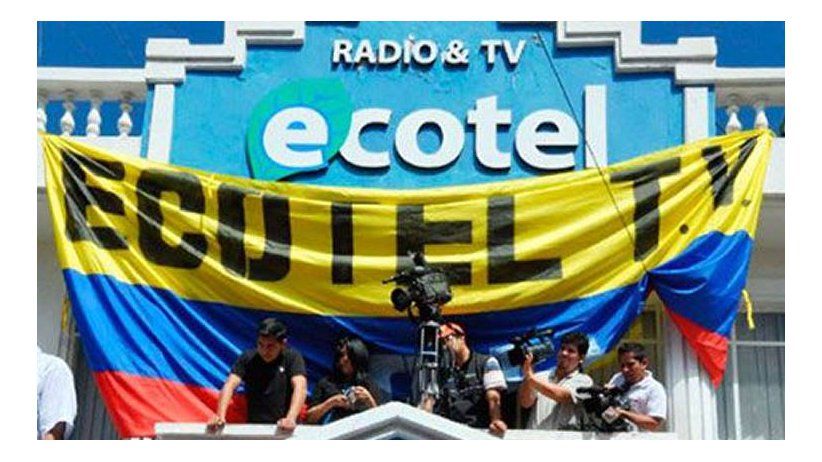 Miami (February 1, 2016) — The Inter American Press Association (IAPA) condemned yet another seizure of broadcasting equipment from an Ecuadorian television network, which forced it off the air as a result of an irregular administrative process. This incident shows how the Communication Act is being used as a way to persecute and coerce independent media outlets.

The facilities of Ecotel TV in Loja were raided on January 6 for the second time. Police officers and agents from the prosecutor's office and the Telecommunications Regulation and Control Agency (Arcotel) seized the network's broadcasting equipment. A similar action had been taken against the network just a few weeks earlier, on December 16, 2015.

Ramiro Cueva, director and general manager of Ecotel TV, filed for an injunction against the measure and said that the network was being shut down in retaliation for news content that was not to the liking of the administration of President Rafael Correa. The administrative process to strip Ecotel TV of its operating license is based on nonpayment of a concession fee in the amount of 52 U.S. dollars in 2002. Dozens of heavily armed agents were deployed in the operation.

Claudio Paolillo, chairman of the IAPA's Freedom of the Press and Information Committee, stated, "We will never cease to emphasize that Ecuador's Communication Act is the worst press law in the Americas, as it helps to legalize the government's persecution of independent media outlets to the detriment of freedom of expression and the right of the Ecuadorian people to receive information."

Paolillo, editor of the Uruguayan newsweekly Búsqueda, hopes that "this unjust, abusive law becomes a major topic of debate and litmus test among the candidates in the upcoming electoral campaign leading into the 2017 presidential elections."

The director and general manager of Ecotel TV must appear at a February 17 hearing at the public prosecutor's office. This hearing will determine whether criminal charges will be pursued on the grounds that a media outlet was being used in violation of the Communication Act, which was passed 11 years after the alleged offense. This crime is punishable by a prison term of three to five years.

Ecotel is now broadcasting on the Internet. Not only has it lost its ability to broadcast over the air, but it was dropped from the lineups of 18 cable operators.

The IAPA, along with Ecuadorian and international press freedom organizations gathered at a forum in Quito in September 2015, reminded President Correa of "his promise to reprivatize the media outlets seized by the government." The Ecuadorian government directly operates seven television channels — a number unequaled in the Americas — and has taken no steps to privatize these operating licenses.

The IAPA is a not-for-profit organization dedicated to the defense and promotion of freedom of the press and of expression in the Americas. It is made up of more than 1,300 publications from throughout the Western Hemisphere and is based in Miami, Florida. For more information, please go to http://www.sipiapa.org