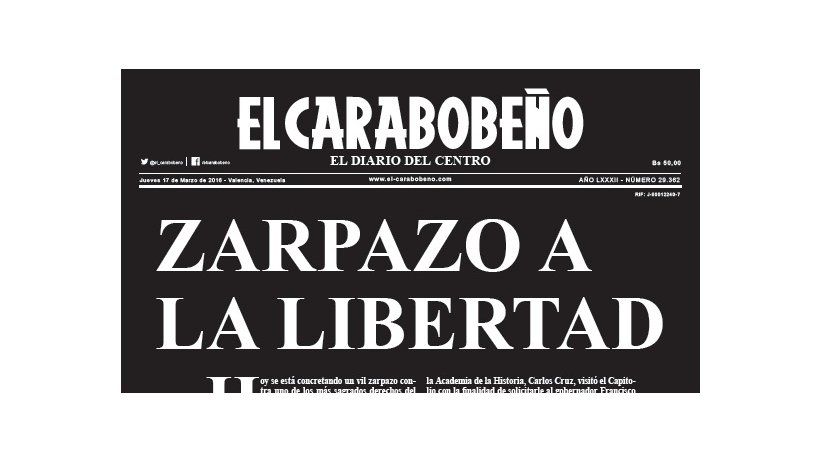 'We'll see you very soon,' the newspaper says in its last print edition

MIAMI, Florida (March 17, 2015)—The Inter American Press Association (IAPA) today named the government of Venezuela as the one responsible for the shutdown of the print edition of the newspaper El Carabobeño by impeding access to foreign exchange for the acquisition of basic supplies enabling the paper to be printed, as part of the policy of governmental control and punishment of independent media.

El Carabobeño today (March 17) issued its last print edition, which used up its supply of newsprint. The paper, created 80 years ago and based in the city of Valencia in the central state of Carabobo, explained in a front page editorial in white letters on a black background that the closure of its print version was due to "there having exhausted efforts to obtain foreign exchange for El Carabobeño to pay debts for supplies acquired abroad."

The chairman of the IAPA's Committee on Freedom of the Press and Information, Claudio Paolillo, editor of the Montevideo, Uruguay weekly Búsqueda, declared, "This forced closure of one of our most important members in Venezuela, a bastion of journalism and staunch defender of freedom of the press and of expression, is another serious blow to the right of the Venezuelan people to be duly informed." He added that "Venezuelans are losing a voice of inspiration and hope, just at the time when they most need it."

Following the installation of the Corporación Alfredo Maneiro, an official agency responsible for the distribution of newsprint, the newspaper "has been denied for a year now the amount of newsprint that legally corresponds to it," El Carabobeño declared. The Corporación Alfredo Maneiro has been indicated as being one of the instruments of pressure by the government of President Nicolás Maduro against independent media which in a discretionary manner assigns or not newsprint quotas.

Venezuela's print media have found themselves harmed and many have shut down their publications for lack of newsprint, a crisis in turn caused by the numerous government obstacles to the provision of dollars for the purchase of newsprint and other necessary supplies. According to data of the Venezuela Press and Society Institute 14 publications have ceased circulating between August 2013 and so far this year, three of them permanently, due to lack of newsprint.

Last week, according to local media, there ceased circulating the newspaper La Mañana, in Falcón state, in the northwest of the country.

El Carabobeño, on which some 300 families depend, declared that "this shutdown evidence that since this publishing house has engaged in accurate and objective journalism, that which does not please a government that has made every effort to impose a communication hegemony which, in Carabobo with the closure of our print edition, is now a fact" and concluded with the phrase "We'll see you very soon."