Signing the Declaration of Chapultepec during a forum at the Peruvian University of Applied Sciences. 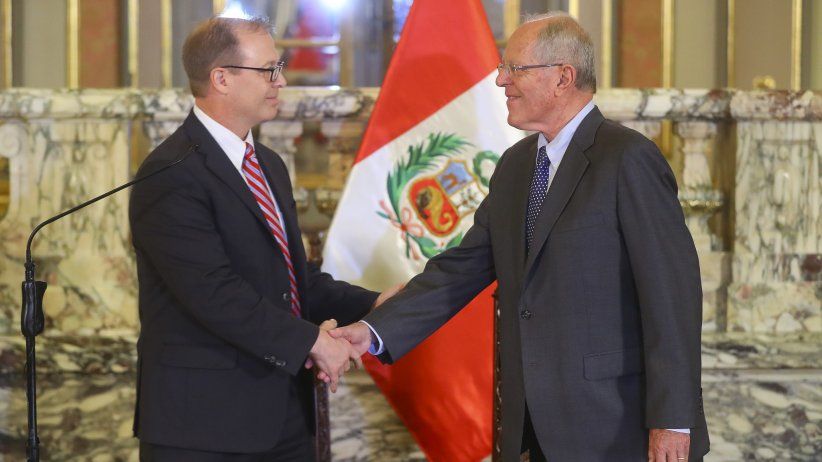 Matt Sander and Pedro Pablo Kuczynski, President of Peru, after signing the Declaration of Chapultepec.

IAPA expressed optimism over several commitments at the highest level of government that could mark a new era in Peru.

Downloads
0
0
Tweet
$.-
LIMA, Peru (May 4, 2017)—The international delegation of the Inter American Press Association (IAPA) that is visiting this city in connection with World Press Freedom Day today expressed optimism over several commitments at the highest level of government that could mark a new era in Peru, although at the same time it echoed concerns of President Pedro Pablo Kuczynski about initiatives contrary to freedom of expression and of the press.
The delegation was made up of IAPA President Matt Sanders, Chapultepec Committee chairman Roberto Dutriz, Press Freedom Committee chairman Roberto Rock and Executive Director Ricardo Trotti.
The mission yesterday held meetings with representatives of the three branches of government concerning issues of violence against journalists and impunity in murder cases, the decriminalization of the offense of defamation, media ownership and several legislative bills that seek to promote confiscatory steps and interference in editorial decisions and in the independence of media.
Following a meeting with Peruvian Attorney General Pablo Sánchez Velarde the IAPA expressed satisfaction at his commitment to set up a working group with players in the Peruvian press to follow up more than 50 cases of murder of journalists committed in the last few decades and that remain unpunished.
Sánchez Velarde agreed to look into which are the cases remaining in the Attorney General's Office so as to speed up the proceedings. The IAPA for its part explained that not having a statute of limitations in crimes against journalists is another of the concepts raised through the Declaration of Pucallpa, a Peruvian press joint document promulgated in 2005.
In a meeting with Supreme Court Chief Justice Diberlí Apolinar Rodríguez Tineo and in response to a request by the IAPA delegates concerning the offense of defamation he said he considered that while this is a matter for the Legislative Branch it would be appropriate for such offenses to be dealt with in the civil sphere.
Rock, editor of the portal La Silla Rota, Mexico City, Mexico, stressed that "it is surprising that Peru has not yet legislated on this matter, an irreversible trend throughout the region and one that enables journalists to work with great freedom without fear of being jailed."
On this same issue the head of the Judicial Branch added that he will review the 2014 exhortation of one of his predecessors, Enrique Mendoza Ramírez, to also insist to criminal court judges that they be more rigorous in examining and accepting lawsuits against journalists and media, which at times have the intention of halting journalistic investigations into corruption.
The IAPA also met with members of Congress Miguel Torres, chairman of the Constitution Committee, Úrsula Letona Pereyra and Alejandra Aramayo Gaona, to whom it expressed its concern about several legal initiatives. The IAPA delegates referred in particular to the bill titled "Law to Protect the Freedoms and Rights to Information of the Population" and another on newspaper vendors that would impose a 2% sales tax in order to establish a pension fund, an initiative described as confiscatory against the media.
Regarding the "Law to Protect the Freedoms and Rights to Information of the Population" bill Torres said that for now there are other priorities and discussions will be continued, promoting a dialogue. To members of Congress Letona Pereyra and Aramayo Gaona, the authors of the initiative, the IAPA said that this puts in evidence their intention to intimidate the press and restrict the editorial independence of media in the context of the anti-corruption fight in the country.
In addition, Rock stressed, "if what is being sought with the initiative is to combat corruption what is really required is a free and unfettered press." The delegation, in line with what was expressed by President Kuczynski, felt that there are seven legal initiatives that affect the work of the news media and called attention to the fact that the majority of these come from legislators of the majority party supporting Fujimorism, the Fuerza Popular, a movement that when it was in government employed strong mechanisms of pressure and control of the news media.
The IAPA also urged the Judicial Branch to resolve as soon as possible the 2013 lawsuit filed by five journalists and Grupo La República group against Empresa Editora El Comercio editorial company. The Chief Justice said that the case is complex and slow due to its characteristics, as both parties continue presenting new appeals, although he assured that the Judicial Branch is working on the process in the best manner.
The IAPA is taking part today (Thursday) in a forum at the Peruvian University of Applied Sciences in connection with World Press Freedom Day. The activity includes panel discussions titled "Press freedom in the age of social media" and "The press and corruption," and will feature presentations by the IAPA delegates and renowned local journalists.
Yesterday at the Government Palace President Kuczynski signed the Declaration of Chapultepec. IAPA President Sanders thanked him for his "commitment to what we interpret as an act of confidence in and of support of democracy and the common good." Also, in the name of the IAPA Dutriz and Rock voiced the satisfaction of the organization at the Executive Branch's commitment and called on the rest of the South American country's political players to join that vision.
The IAPA is a not-for-profit organization dedicated to the defense and promotion of freedom of the press and of expression in the Americas. It is made up of more than 1,300 publications from throughout the Western Hemisphere and is based in Miami, Florida.