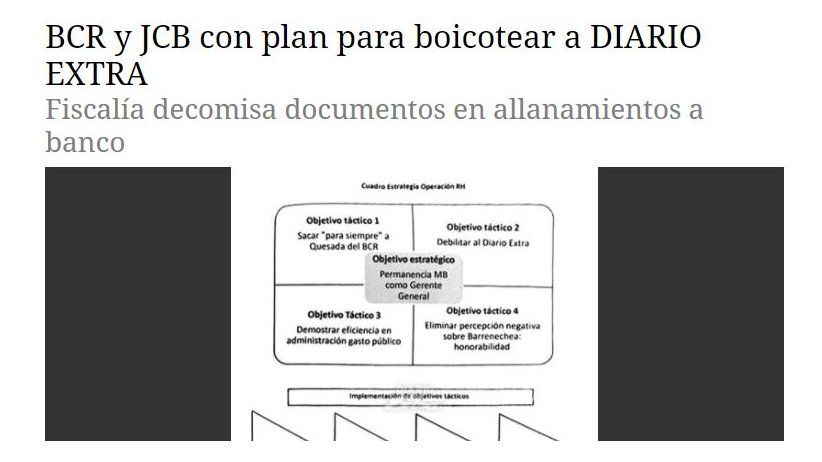 Diario Extra reported the existence of a broad destabilization plan against the paper.

MIAMI, Florida (November 10, 2017)—The Inter American Press Association (IAPA) today expressed concern at a presumed plan to intimidate the Costa Rican newspaper Diario Extra in reprisal for its denunciations and reports concerning acts of corruption in the public administration.

This week the paper reported the existence of a broad destabilization plan against it consisting of smearing its reputation before the Journalists Guild's Ethical Tribunal, the filing of lawsuits and suspension of official advertising, among other forms of pressure.

Several authorities and organizations echoed the denunciation, which was confirmed by the Costa Rican Attorney General's Office on examining documents in which there were revealed details of those plans. That Office confiscated documents in raids on bank offices that sought to shed light on a case of trafficking of influences, known as "el Cementazo" (the Cementation) and in which there were understood to be involved cement industry businessman Juan Carlos Bolaños and the general manager of the state-owned Bank of Costa Rica (BCR), Mario Berrenechea, as well as other executives of that entity, politicians, legislators and judges.

Roberto Rock, chairman of the IAPA's Committee on Freedom of the Press and Information, declared that any act of reprisal against a media outlet amounts to an attack upon press freedom. Rock, director of the Mexican portal La Silla Rota, said that "it is necessary that the authorities investigate these plans, determine responsibilities and cast transparency in favor of the public's right to know."

Rock also noted that the precepts of the Declaration of Chapultepec say that no journalist or news media should be punished for seeking the truth.