For the first time in the Repubican history of Ecuador three members of a press team were murdered this week in the Mataje zone, on the northern border with Colombia. The members of the newsroom of the Quito newspaper El Comercio, Paúl Rivas, photographer; Javier Ortega, reporter, and Efraín Segarra, their vehicle's driver, were kidnapped on March 26 as they were heading to news coverage on the border zone where there had been reported several incidents between the Army and criminal groups associated with drug trafficking.

One day after the kidnapping occurred Interior Minister César Navas reported on the matter, attributed to FARC dissident and drug trafficker Walter Arízala, alias "Guacho." Since then the government of President Lenín Moreno attempted to control the information, requesting censorship by the news media in order to prevent the dissemination of the names of the victims. The uncertainty of the whereabouts of the victims and the lack of transparency in the official information led the family members to authorize the dissemination of the names of those kidnapped six days after the abduction occurred, and in open challenge to the government's recommendations.

Two videos aired on April 3 by Colombian television channel RCN were the first proof of life since the kidnapping. In the audiovisual there was seen the journalists chained up and while they remained hugged they indicated what would be the conditions for their being freed: the exchange of three of the henchmen detained in Ecuador and the annulment of the agreement that the country and Colombia have to put an end to terrorism.

The Ecuadorean authorities have rejected the publication of these videos, declaring their "deep discomfort" at their airing.

Although the authorities declared to the press that they were negotiating President Moreno also threatened to launch a military operation on the border. On April 11 Colombian media reported on a communiqué attributed to the criminal organization in which it was said that the El Comercio team had been executed. The following day the RCN channel reported that it had in its possession images of the bodies and it sent them to the non-governmental organization Fundamedios for it to turn them over to the Ecuadorean authorities.

The Ecuador government initially said it could not confirm the veracity of these photographs and indicated that its investigations were continuing. Only on the morning of April 13 did the President confirm the news of the murder. The exact date that it occurred is not yet known, nor are the whereabouts of the bodies.

It is a fact that the Ecuadorean government ceased protecting journalists more than 10 years ago, at the start of the regime of former president Rafael Correa. Harassment of the independent press became a Government Policy protected by several articles in the Constitution, laws and regulations, in particular by the Communication Organic Law. Despite repeated offers by the National Assembly and President Moreno during his election campaign so far there has not been initiated any legislative reform process. Ten months have passed since a copy of the newspaper La Hora was destroyed for the last time in the hands of a head of state. Shortly after reaching the first year of the current government the scenario for the practice of journalism appears to have taken another course, since the time when the Presidency went after journalists.

After several year journalists Janeth Hinostroza, Diego Oquendo, Estéfani Espín, Rafael Cuesta, Alfonso Espinosa de los Monteros and Mónica Almeida, among others, went back into the Carondelet Palace to have a reconciliation with the President, this under the well-known proposal of dialogue and "refreshing" relationship that is sought by the current president, Lenín Moreno.

Among other happenings, on March 19 through an Executive Decree the President eliminated the SENAIN, an intelligence unit that during the previous government investigated both opponents and journalists, and on April 9 the General Comptroller's Office of the government approved that there be issued a report that contains information of the contracting of the foreign debt, thus making transparent information that a decade ago was described as classified.

On March 7 the provisional Citizens Participation Council fired Carlos Ochoa from his role as Communication Superintendent. According to the examination by the Treasury he was said to have used funds of GamaTV, one of the media seized by the government since 2008, to obtain a vehicle for his personal use. Then on March 12, with the votes of 119 of the 120 legislators of the National Assembly, he was also censured and fired for non-compliance with his duties, for violating the Magna Charta and other laws of the Treasury, Communication and Public Service. He was accused of having ordered the printing of 300,000 copies of the Communication Law with alterations to its regulations, which served him to punish several broadcast news media.

In a session with the Audit and Political Control Commission he declared that 364 media had been punished, for a total of $754,690. He denied that any news media had gone bankrupt due to the punishments.

After years of "intimidation" and legal proceedings there are those who regained their freedom. On February 22, 2018 there was described as an historic day for activist and journalist Fernando Villavicencio after learning of the decision of the Pichincha Tribunal which declared him to be innocent along with the former Congressman for Pachakutik, Cléver Jiménez. For five years they had been prosecuted for the offense of dissemination of classified information, going from preventive detention to the use of electronic devices in exchange for conditional freedom.

Enrique Rosales Ortega, editorial writer with an opinion column in the newspaper El Universo, recovered his freedom after paying a fine, having been detained in the Penitentiary since December 12, 2017. He had been sentenced to two years in prison and the payment of $15,000 during the proceedings that were started by former Congresswoman Vanessa Fajardo in 2016 for alleged calumny committed on the radio.

On November 1, 2017 Augusto Espinosa, Congressman and the chairman of the Education, Culture, Science and Technology Committee, sent a note to Supercom to request that there be revised several notes published by the newspaper Expreso on cases of child abuse in schools, considering that the newspaper committed media lynching.

Attacks by public officials on journalists continue. On January 12 this year, during a public event organized by the mayor of Loja, José Bolívar Castillo, Ecotel TV director Ramiro Cueva was the victim of intimidation by the mayor and his sympathizers. He was called "delinquent," "jerk" and other names that were accompanied by attempts at physical attacks.

El Universo, in a February 28 note, complained of having received false Facebook and WhatsApp chats on the part of the Guayas Provincial Council, which said that the journalists had received money to investigate the Prefecture of Jimmy Jairala. The newspaper explained that this was about reprisals for notes on million-dollar contracts awarded to companies associated with family members and friends of the Prefecture.

Supercom continues to issue warnings to the media. It characterized as "grotesque" an expression by the Ecuavisa news program on the fall of the pedestrian bridge on Santay Island, and also criticized El Universo which on its front page headlined "The pedestrian bridge to Santay, to piqué." Supercom held that "in a colloquial sense it is understand unfailingly that it fell all by itself."

Several digital media suffered informational attacks. Ecuador en Vivo and MilHojas are some of the portals that were blocked temporarily, along with other personal accounts of journalists such as Christian Zurita and Fernando Villavicencio. They had shared the filtering of a report of the Financial Analysis Unit on a case of corruption that involves brothers Fernando and Vinicio Alvarado, former officials. The documents were also published in the portals Focus and Milhojas, which denounced an attempt at hacking. The account of Crudo Ecuador was suspended on March 8 for seven months. The use of false Twitter accounts to make death threats to journalists has increased; among those that received these attacks are the host of Teleamazonas, Janeth Hinostroza, and journalist Luis Eduardo Vivanco, of the La Posta portal.

The message of President Moreno appears to be conciliatory and without aggressions. However, the Ecuadorean press still has obstacles for its practice in full freedom. The newspaper Expreso and its journalist Sara España were disqualified by former President Rafael Correa after refusing to respond to a question. Correa suggested to the foreign journalist that she leave the country and

branded the newspaper for having a "terrible level." This occurred during a press conference that the former president gave after his appearance before the Guayas Attorney General's Office for an investigation into alleged damage to the state in the anticipated sale of petroleum to China.

Other events during this period:

On October 11 Supercom fined Lesotho S.A Radio Canela 90.5 FM, 10 basic salaries for disseminating contents not appropriate for the hour and kind of audience.

On October 15 in the Twitter account "Alerta-911", a troll, Teleamazonas journalist Janeth Hinostroza was threatened with "shooting her."

On October 23 Supercom reprimanded Canal Uno television over its discriminatory content regarding ethnicity.

On November 2 Supercom required the newspaper Expreso to publish a rectification and ask for forgiveness for publishing something headlined "To reach 105 years and still able to dance them."

On November 29 Hernán Ramos, who had been entrusted with directing the new editorial stance of public media, was fired from his post following a publication in El Telégrafo headlined "The abortion law at a final stage," referring to the Law to Prevent and Eradicate Violence Against Women.

On December 1 Supercom called attention to the newspaper Opinión de Machala for publishing full-color images of people who died in violent circumstances.

On December 4 Supercom opened proceedings against Teleamazonas after opinions made by Congresswoman Lourdes Cuesta (CREO) in an interview with Janeth Hinostroza, where she questioned the actions of the regulatory body. On December 5 there was held a hearing on the alleged non-compliance with the channel's right of reply.

Following the refusal of Teleamazonas to broadcast a response by Superintendent Carlos Ochoa to statements by a Congresswoman, on December 12 Supercom imposed a fine equivalent to 10% of the billing of the last three months and called for the dissemination of a reply in 72 hours. Teleamazonas on December 19 submitted a protection action to leave the $300,000 fine without effect. On December 21 Judge Lucila Gómez ordered precautionary measures in favor of the media outlet and then the court ruled in favor of Teleamazonas, obliging Ochoa to say sorry.

On December 22 the judges left without effect a punishment of El Comercio imposed by Supercom.

On February 22 the Pichincha Tribunal declared the innocence of former Congressman Cléver Jiménez and of activist Fernando Villavicencio, who were tried for the offense of divulgation of reserved information since 2013. The Tribunal ordered that there be lifted all the precautionary measures weighing upon them.

On March 8 Twitter suspended the account of Crudo Ecuador (@CrudoEC) for the second time. The last publications of the account concerned former president Rafael Correa, who had been criticized for denying any possible involvement in cases of corruption of officials.

Journalist Luis Eduardo Vivanco, of the portal La Posta, revealed that since late 2017 he had been harassed and threatened with death by a Facebook user identifying himself as "Ángel R Loyola."

On March 16 the signal of Ecotel TV channel in Loja returned to the air after 27 months of shutdown since dawn on December 16, 2015, when a police officer seized its equipment. This was part of a process open since 2014 by the then National Telecommunications Council (CONATEL) that claimed a delay in the payment of tariffs for concession use.

Ecuador freedom of the press 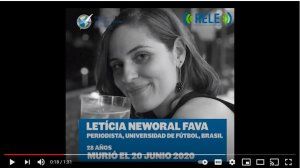