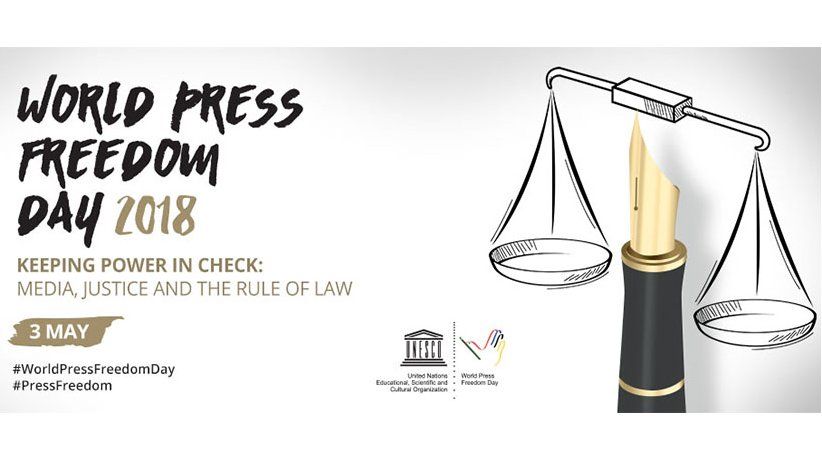 "Keeping Power in Check: Media, Justice and the Rule of Law" is the theme chosen for this year's celebration in Ghana.

May 3 will mark the 25th anniversary of World Press Freedom Day whose flagship celebration, organized by UNESCO and the government of Ghana, will be held in Accra, from 2 to 3 May, with the participation of the country's President Nana Akufo-Addo.

The theme chosen for this year's World Press Freedom Day is "Keeping Power in Check: Media, Justice and the Rule of Law." It explores the interaction between the judiciary and the media, and their complementary roles in fostering transparency, accountability and governance. Dozens of World Press Freedom Day events are being organized around the world.

The programme of the international conference in Accra highlights the media's contribution to government accountability and to the transparency of elections. Ways to reinforce the ability of the judiciary to protect press freedom will be assessed along with the risk posed by attempts to regulate online speech.

More than 700 participants will attend the conference, among them high-level representatives of regional and national judiciary systems, ministers, heads of media organizations, journalists and civil society will participate in 18 parallel sessions, arranged in multiple interactive formats, on topics ranging from internet shutdowns, to gender-based harassment, through safety protocols for journalists, and artistic freedom in the digital age. A special session on national safety mechanisms in Africa will also be organized.

An academic conference will present new research on the safety of journalists. For the first time, a Policy Labwill offer a unique opportunity for high-quality interactions between researchers and policy actors working on common topics.

On the occasion of World Press Freedom Day, UNESCO will launch its's flagship publications on press freedom: the World Trends in Freedom of Expression and Media Development and Re-shaping Cultural Policies.

An exhibition of works by this year's winners of UNESCO's annual World Press Photo contest will be on show during the celebration.

Independent news organizations have come together, launching a new campaign, Read more, Listen more, for World Press Freedom Day urging everyone to look beyond their usual information channels and seek out news sources that offer a different perspective.

Meanwhile, video messages by high profile journalists, artists and advocates will highlight the importance of press freedom and freedom of expression from various perspectives at a time when misinformation, censorship, harassment and violence against journalists and artists put new strains on fundamental human rights. (see the 25Secondsfor#PressFreedom campaign)

World Press Freedom Day was proclaimed by the UN General Assembly in 1993 following the Recommendation of the 26th session of UNESCO's General Conference in 1991.It also marks the 70th anniversary of the Universal Declaration of Human Rights.