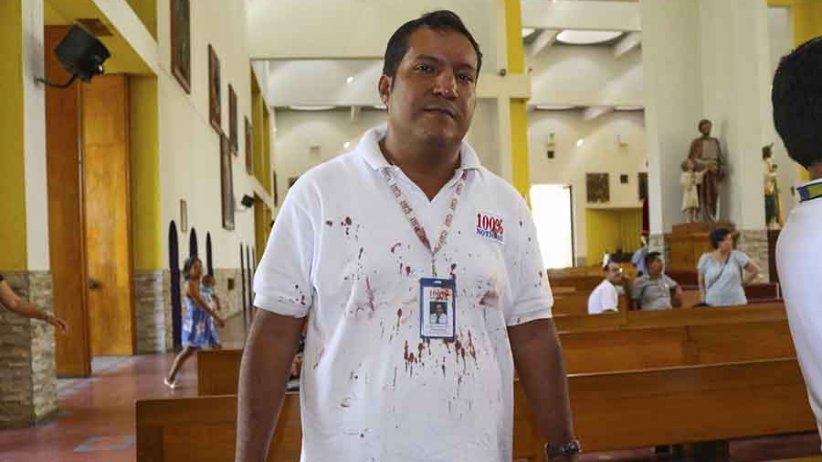 The violence and the repression of press freedom in Nicaragua that has reached dangerous and serious levels for the entire population and the work of the press.

MIAMI, Florida (July 10, 2018)—The Inter American Press Association (IAPA) today stressed its condemnation of attacks on journalists in Nicaragua that underscore the serious political crisis and violence affecting the country since April this year and which has left more than 300 people murdered.

Journalists and Roman Catholic Church bishops were attacked by paramilitaries and mobs loyal to the regime of President Daniel Ortega in Diriamba, some 28 miles south of thee capital, Managua. The religious men on Monday traveled to that part of the Central American country after the violence reported there the previous day that left at least 11 dead and to intercede for the freeing of 12 people who were trapped in the San Sebastian basilica in Diriamba.

IAPA President Gustavo Mohme expressed his most energetic condemnation "in the face of the violence and the repression of press freedom in Nicaragua that has reached dangerous and serious levels for the entire population, it restricts the work of the press and puts at risk journalists' physical safety." Mohme, editor of the Peruvian newspaper La República, said the regime was responsible for the violence underway in the country.

For his part, the chairman of the IAPA's Committee on Freedom of the Press and Information, Roberto Rock, editor of the Mexican news portal La Silla Rota, declared, "It is obvious that we are facing a systematic attack on journalism and all the institutions of Nicaraguan society, coming from a regime that does not respect its citizens and imposes terror."

During the coverage yesterday there were attacked Jairo Castillo of Canal 10 television and Jackson Orozco of 100% Noticias, who sustained a broken nose. Also threatened, beaten and robbed of their personal documents, cell phones and work equipment were reporter Uriel Velásquez and news photographer Óscar Sánchez of El Nuevo Diario, and Daleana Ocaña of Canal 12 television.

In addition, there were destroyed the video cameras of Federico Lanuza of Canal 12; Kenneth Rodríguez of 100% Noticias; Richard Centeno of Canal 12; Róger Sánchez of Canal 23 and Canal Católico; as well as the equipment of news photographer Jader Flores of La Prensa. Ricardo Salgado, cameraman of Confidencial and Marvin Recinos, AFP photographer, were beaten up to steal their cameras, and Radio Corporación also denounced attacks upon its journalists during coverage in the basilica.