Nicaragua: IAPA welcomes release of journalists, but warns that freedom of the press and of expression have not improved 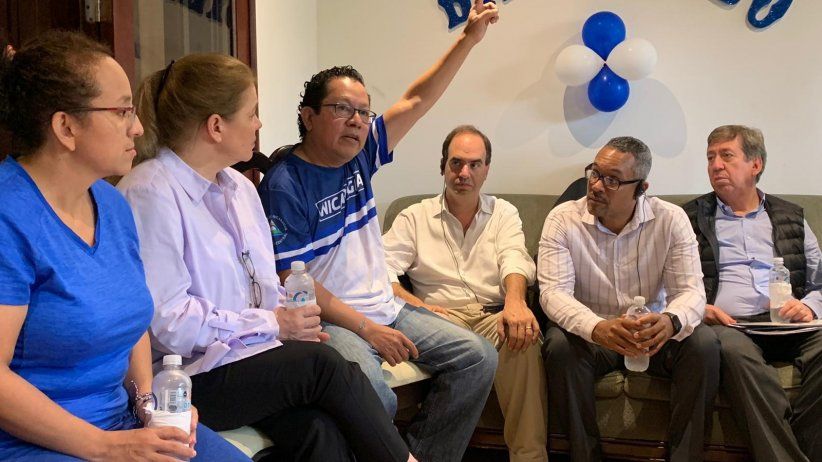 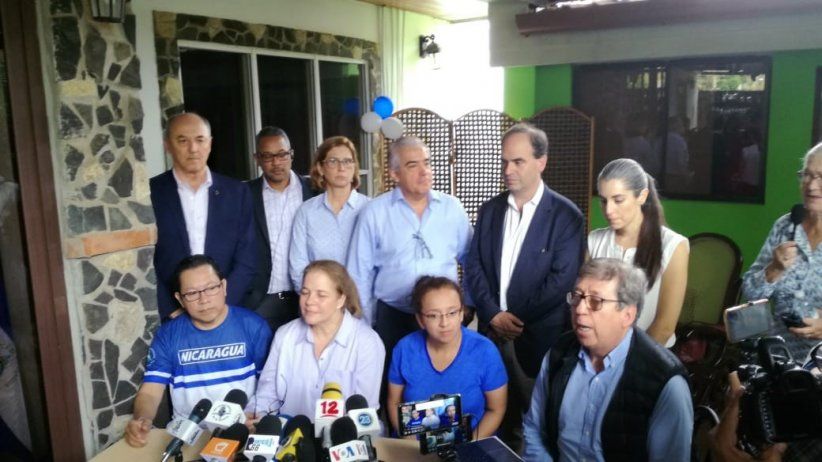 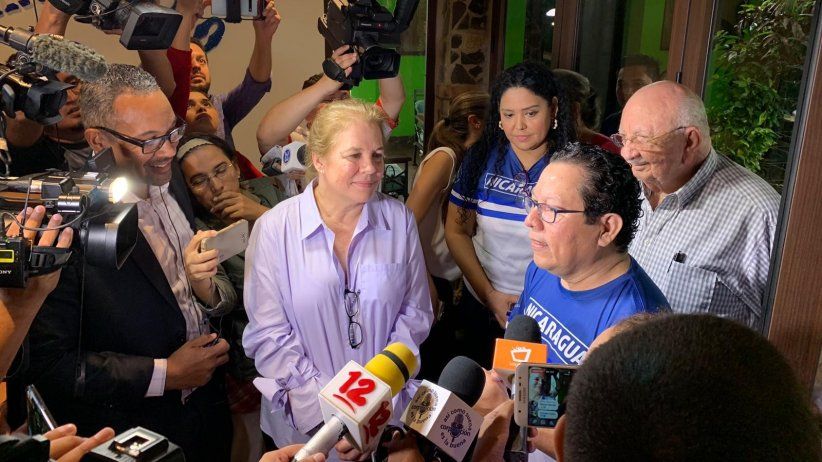 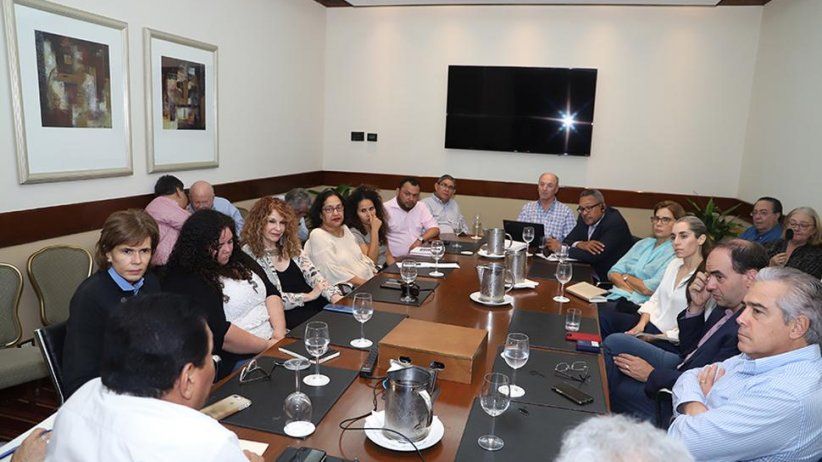 The IAPA found no indication that the regime has improved its respect for freedom of the press and expression in any way.

MANAGUA, Nicaragua (June 12, 2019)—A mission of the Inter American Press Association (IAPA) visiting this city since Monday learned of the release of Nicaraguan journalists Miguel Mora, Lucía Pineda and Marion Powell Sánchez, under terms of an "amnesty law" brought about by the government of President Daniel Ortega.

The IAPA mission, headed by the organization's president, María Elvira Domínguez, welcomed this release but declared, in the conclusions of the visit, that it had not found any indication that the Ortega regime has in any way improved with regard to its respect for freedom of the press and of expression.

This is the third delegation that the IAPA has formed in nine months to confront the harassment that is being suffered in the exercise of these freedoms in Nicaragua. In August 2018 it also visited this city and in March of this year Washington, D.C., to meet with Luis Almagro, Secretary General of the Organization of American States (OAS), American officials and legislators, members of the Inter-American Commission on Human Rights (IACHR), the Special Rapporteur for Freedom of Expression, and leaders of the press and of civic organizations.

In this mission in Managua the IAPA held meetings with journalists, heads of media and of labor unions, members of the Civic Alliance, representatives of multilateral organizations, members of the Latin American and European diplomatic corps, ecclesiastical hierarchs and the released journalists Miguel Mora and Lucía Pineda. The dialogues that were held enabled an enrichment of points of view, the finding of coincidences and the guaranteeing of an unbreakable solidarity in favor of freedom and democracy in Nicaragua.

The IAPA mission has produced a set of initial conclusions that will be included in a more exhaustive report that it will take to its General Assembly and Executive Committee. These conclusions are the following:

1. We express our alarm at the persistent deterioration of freedom of expression and of the press in Nicaragua as we have been recording since 2007, a situation that has worsened since the political and social crisis unleashed in April 2018.

2. We welcome the release of journalists Miguel Mora, Lucía Pineda and Marlon Powell Sánchez under terms of an "amnesty law" that has given rise to more doubts than certainties in the international community concerning the validity of the rule of law in Nicaragua. This release, however, is a success of the civil mobilization, which from here we applaud. It is a very pleasant experience to meet today with them, embrace as colleagues that we admire. We join their family and friends in a feeling of pride for their fight in favor of a better Nicaragua. And, very especially, we offer them the permanent solidarity and permanent accompaniment in the new tasks that they decide to undertake.

3. We deplore the fact that, in an unceasing manner, the Ortega government has escalated a climate of repression and harassment of the country's independent press, which includes unjustified accusations, arbitrary detentions and jailing of journalists, as in the cases of Mora and Pineda, without observing due process, which has also brought about the fact that more than 70 journalists have gone into exile for not having guarantees for the exercise of their profession and protection of their physical integrity and that of their families. There would appear to be in sight an official attempt to choke all expression of independent press, which historically supposes a symptom of an authoritarian regime.

4. We reiterate the demand to the government to reverse the attacks upon news media that have been engaged in with police forces, withdrawing their operating licenses or destroying their goods and equipment, as happens in the cases of Radio Darío, channels 100% Noticias, 10 and 12 or Confidencial. There should be restored immediately their belongings and equipment, withdraw the charges against them and allow them to be able to operate normally and with guarantees that the acts of brutal official censorship will not be repeated.

5. We reiterate our deep repudiation of the murder of journalist Ángel Eduardo Ghaona, committed on April 21, 2018, when he was covering popular protests in the town of Bluefields in the southeast of the country. The case is even more outrageous due to the impunity that has dominated the investigations to bring to justice those truly responsible for this attack. Now released those accused on whom there weighed serious doubts about the authorship of the crime, we hope that in a new process and with the help of the Inter-American Human Rights System there be seen the obligation to identify and process those truly responsible for the murder.

6. We urge the government to immediately hand over to the newspapers La Prensa and El Nuevo Diario the materials and supplies retained in the National Customs Directorate which made it impossible for the media to circulate normally, seriously damaging press freedom and the public's right to information. In the same manner we ask that an end be put to other measures of indirect censorship, through which many media are harassed with inspections by fiscal and social security bodies, they being discriminated against in the granting of operating licenses and in the placement of official advertising.

7. We ask the government, under the precept that it only administer the entrusted state assets, that it put at the disposal of all the citizens official information, regulate the necessary mechanisms of the still inoperable Law of Access to Public Information and stop using public media and that owned by those close to the government, converting the official information into an instrument of propaganda.

8. We urge the government to begin its path to respect for freedom of the press and of expression and the rights to meet, associate and protest, complying with the IAPA resolutions that emanated from its last meetings, with what was stipulated in the negotiation roundtable with the Civic Alliance, in particular with points 10 and 17 of the 29 established, with the latest precautionary measures and provisional ones established by the Inter-American Human Rights Commission and Court, as well as with the report of the United Nations Commission on Human Rights.

9. We urge the Nicaraguan society to continue backing its independent press, which has waged a noble battle in favor of the civil rights of all the citizens. It is never too much to remember that freedom of expression is a lush tree in which there is sheltered the exercise of any other freedom, and we remind that an attack upon the independent press of Nicaragua is an affront to all free journalists of the world.

10. We call upon the international community to remain vigilant concerning the institutional and socio-political crisis in the country, contributing their best services and carrying out the summary processes within their reach, with the aim that the Nicaraguans soon will enjoy the democracy that they are fighting so much for and to which they have a right that nobody can nor should take from them.