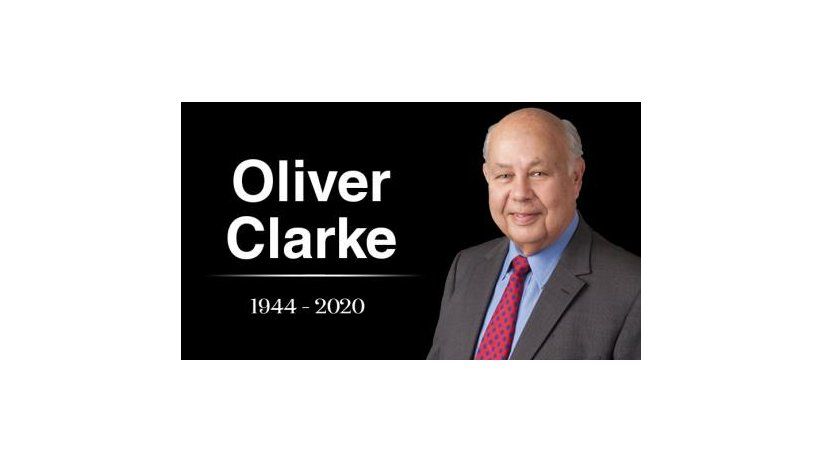 Oliver Clarke (Photo from The Gleaner)

"The loss of Oliver Clarke is an immeasurable one not only for Jamaica but for me personally," Christopher Barnes, IAPA President.

The loss of Oliver Clarke is an immeasurable one not only for Jamaica but for me personally. I don’t think that there is a measure for the reach that this man had across the length and breadth of Jamaica. He touched many people individually and has always had the well-being of Jamaicans at the forefront of everything that he did, whether it was through Jamaica National or through The Gleaner, an institution with which I have been associated for 13 years under his personal mentorship and tutelage.

Through these two quintessential Jamaican brands, Oliver always had a focus what was needed for Jamaica and Jamaicans to advance along the path of development and financial independence at any given time and in any different circumstance. His natural inquisitiveness placed him in good stead to be at the helm the Gleaner as this provided a credible vehicle through which all the right questions could be asked and answered, and for viewpoints to be put forward, without fear or favour, all for the benefit of Jamaica and Jamaicans.

Oliver had very close friends and many acquaintances but one of his greatest attributes was that even those who considered themselves his enemies had a seat at his table where they were treated with the respect many a person would dig deep for, but would never be able to find. Using this impeccable tact and touch Oliver was able to break through many deadlock situations which resulted in forward movement on some very difficult issues for both the business, and for the country.

Here is a man who charted a path to the freedom of the press ranking that Jamaica, and the wider Caribbean, enjoy now. Many of the benefits enjoyed by media now came at the hands of this amazing pioneer. He will be forever revered by those who understood and believed in his mission.

I personally have lost a mentor and quite frankly someone who was family for me. I will greatly miss those invaluable moments of Oliver’s wit, Oliver’s dry humor and and his inability to accept no or it cannot be done as an answer. He was tough yet fair and fiercely loyal.

Oliver has played a significant role in the person that I am both personally and professionally and it is my sincere hope that I can do justice to the legacy that this man has left behind. He mentored and supported many like me and mingled equally with the privileged and the commoner with genuine interest and care for the wellbeing of all. This true Jamaican patriot will be sorely missed. I was for his family strength in this time of sorrow and may his soul rest in eternal peace.