Peru: the country with the worst climate for press freedom 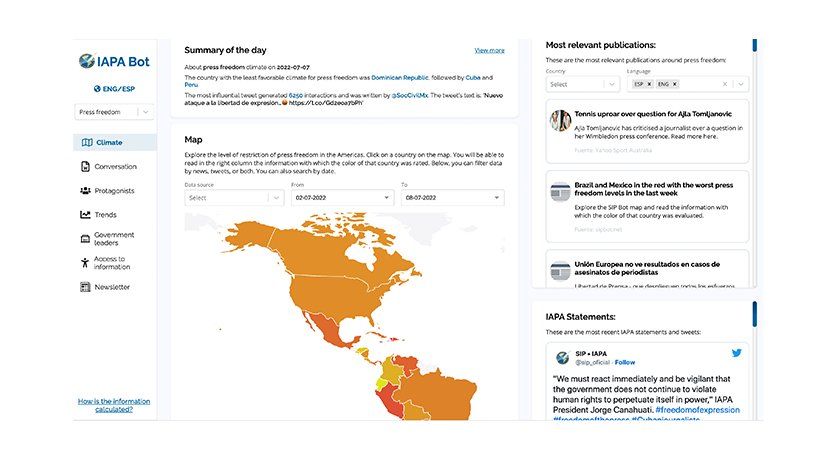 The assertion comes from the week's summary of news and conversations summarized by IAPA Bot.

Downloads
0
0
Tweet
$.-
Miami (July 8, 2022) - Peru was the country in the hemisphere with the most dramatic change in press freedom climate this week, according to the heat map of IAPA Bot, a real-time monitoring tool of the Inter American Press Association (IAPA), based on Artificial Intelligence.
What is the reason for Peru's bright red on the heat map? First, the government tabled a bill that punishes the dissemination of confidential information in a criminal investigation. It caused a great stir in the country as many claimed that it would have consequences on freedom of expression and the right to information. In addition, a group of journalists from América TV were kidnapped and extorted to read a live proclamation as a condition for release.
At the beginning of the IAPA Bot, there is a map of the Americas with different colors according to the press freedom situation in each country. For example, bright red denotes severe restrictions, and green indicates a favorable environment for freedom of expression. The range of colors also includes orange and yellow.
Argentina, Canada, Colombia, and the United States were the countries with moderate press freedom restrictions, with more yellow tones showing an improvement from last week. In Colombia, for example, phrases such as "Cartel del micrófono" or "Sicarios del micrófono" began to be used on Twitter to refer to journalists who create fake news to support or extort public officials.
Mexican journalists continue to suffer attacks. This week Mexico remained in shades of red and orange. The most recent example of aggression was committed against journalist Susana Mendoza, who was stabbed outside a radio studio.
Chile also had a busy week as, on Twitter, both citizens and media denounced the large amount of false news published on social networks regarding the October referendum.
SIP Bot also showed the Twitter accounts with the most interaction, such as @biobiobio, a Chilean account with almost four million followers. The most used terms this week was "freedom of expression" and "Fake News," with the highest number of mentions in Chile and Nicaragua.
SIP Bot is an artificial intelligence tool of the Inter American Press Association that monitors press freedom violations in real-time. It tracks information published in the media, Google News, Twitter, and IAPA reports and denunciations. In addition, it contains a heat map that allows observing the press freedom climate in each country, a button to make complaints and a menu that highlights the statements of government leaders, citizens' conversations, and relevant events.