IAPA Bot this week: Peru and Nicaragua remain in the red and Ecuador and Costa Rica worsen 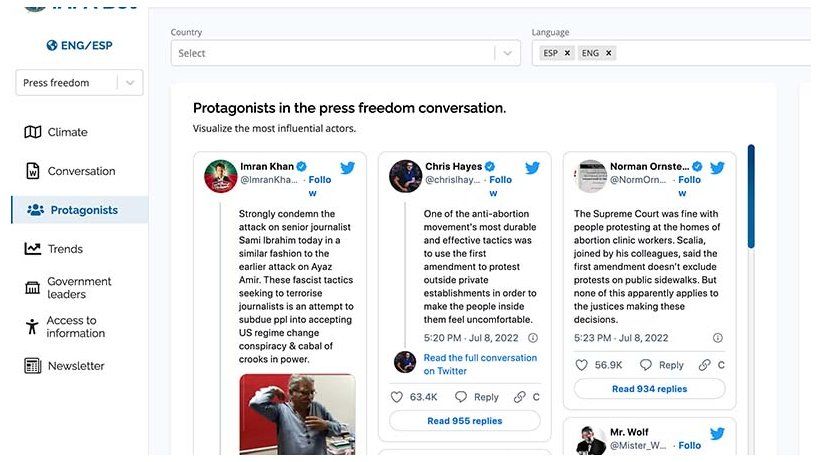 Honduras for now enjoyed the best climate for the practice of journalism.

Downloads
0
0
Tweet
$.-
While Peru remained throughout the week with a deplorable state of press freedom, Honduras was shown as the country with the best climate for the practice of journalism in the IAPA Bot press freedom monitoring map.
In addition to the "Gag Law" bill that aims to put an end in Peru to the dissemination of confidential information on criminal investigation cases in the media, América TV journalist Eduardo Quispe and his work team were kidnapped for five hours by peasant patrols in Cajamarca. They were also forced to write a communiqué in exchange for their release.
On the SIP Bot map, which tracks in real time information and conversations on social networks about press freedom, a bright red denotes a country where this freedom cannot be exercised. At the other extreme, a light green denotes a country where there is a favorable environment for freedom of expression. The color scale is as follows: red, orange, yellow, green.
In Ecuador, the press freedom climate worsened, presenting yellow and red colors. A journalist of Infobae was attacked, discriminated against and disqualified for her journalistic work, after conducting an interview with President Guillermo Lasso. Users on Twitter wrote with aggressive tones "journalists are dogs" "the press is trash", "interviewer trash" among others.
Surprisingly, the weather map shows Honduras as the country with the best press freedom this last week, appearing with green and light yellow tones.
Costa Rica is also going through complicated times as the newspaper La Nación denounced that the press is suffering a systematic attack orchestrated by the government of Rodrigo Chaves, which includes a campaign of delegitimization and worrying signs of violence. Costa Rican journalists reject any kind of censorship, media control or violence against press workers.
Bolivia showed orange tones, due to the fact that the Minister of Justice Iván Lima pointed out that freedom of expression "is not absolute".
In Argentina there was a commotion on Twitter. On July 9, a demonstrator marching against the government due to the economic crisis was being interviewed by LN+ media. When he was aiming at the president and vice-president of the country, they tried to remove him from the scene, taking away his microphone.
In Nicaragua, the six journalists who, according to President Daniel Ortega, were "traitors to the homeland" for going against the president, continue to be imprisoned. These political prisoners are facing health problems and their rights under international norms on the treatment of prisoners and human rights are being violated.
The SIP Bot tool allows us to know the accounts with more interaction on Twitter. This week it was @Mister_Wolf_0 user with 142 thousand followers who talks about the October plebiscite in Chile. On the other hand, the most used terms are again "freedom of expression" and "Fake News", and the countries where they were most mentioned are Argentina, Chile and Costa Rica. To see more related tweets we invite you to enter the Bot and in the "Protagonists" section you will find the most influential actors on the subject along with their opinions.
Translated with www.DeepL.com/Translator (free version)
IAPA Bot is an artificial intelligence tool of the Inter American Press Association that monitors press freedom violations in real-time. It tracks information published in the media, Google News, Twitter, and IAPA reports and denunciations. In addition, it contains a heat map that allows observing the press freedom climate in each country, a button to make complaints and a menu that highlights the statements of government leaders, citizens' conversations, and relevant events.
IAPA is a non-profit organization dedicated to defending and promoting freedom of the press and expression in the Americas. It comprises more than 1,300 publications from the western hemisphere; and is based in Miami, Florida, United States.

IAPA Bot: Nicaragua and Venezuela the worst countries in terms of press freedom this week