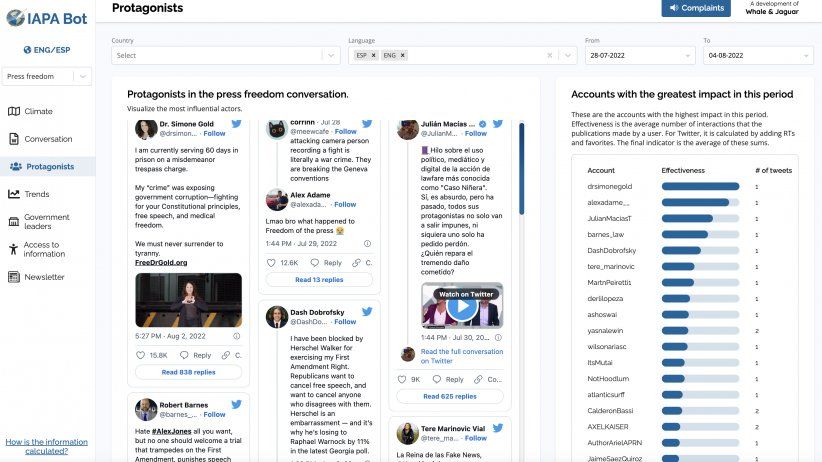 IAPA Bot is an IAPA tool that operates with Artificial Intelligence to monitor issues affecting the media and journalists in real-time.

The arrest of the president of the newspaper elPeriódico of Guatemala, the murder of a journalist in Mexico, and the closing of radio stations in Nicaragua by Daniel Ortega's regime, reflected the profound deterioration of the press freedom in Latin America in the last week.

On the other hand, in Ecuador, El Salvador, and Uruguay, there were some signs of progress in the practice of journalism.

IAPA Bot is an IAPA tool that operates with Artificial Intelligence to monitor issues affecting the media and journalists in real-time. The most popular feature of IAPA Bot is the heat map in which countries are identified with a gradation from red to green according to their press freedom performance.

Guatemalan journalist José Rubén Zamora remains in detention, awaiting trial on charges of money laundering, racketeering, and influence peddling. The international community and the IAPA demanded the journalist's release and due process, fearing that a case may have been fabricated in retaliation for his journalistic work, which stands out for his investigations on corruption cases in the public administration of the present and previous governments.

In Mexico, the scourge of murdered journalists does not cease to worry. Ernesto Méndez, director of the digital media Tu Voz, was murdered by an armed group that broke into a bar he owned. It is the 13th journalist murdered in 2022.

In Cuba this week, journalist Lázaro Yuri Valle Roca was sentenced to five years in prison for calling for free elections. In addition, he was accused of carrying out enemy propaganda. He is in a maximum security prison.

SIP Bot is an artificial intelligence tool of the Inter American Press Association that monitors press freedom violations in real-time. It tracks information published in the media, Google News, Twitter, and from a selection of IAPA notes and denunciations. In addition, it contains a heat map that allows observing the press freedom climate in each country, a button to make complaints and a menu that highlights the statements of government leaders, citizens' conversations, and relevant events.