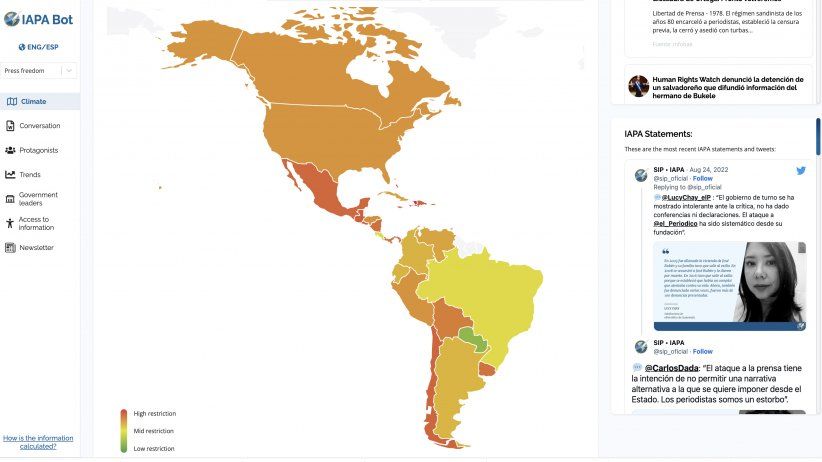 The IAPA Bot is an artificial intelligence tool to monitor press freedom issues in real time.

Miami (August 26, 2022) - An onslaught against independent media in Bolivia, the devastating press crisis in Nicaragua - and the Central American region in general - and the 18th Mexican journalist murdered this year stained red the climate map of the IAPA Bot.

With no possibility of paying their debts to the tax authorities, some Bolivian media are heading for bankruptcy. A group of journalists in Sucre declared an emergency in defense of freedom of expression and denounced the government's economic suffocation of the media.

The situation in Guatemala is not improving. Journalist José Rubén Zamora remains detained by the government despite international calls for release. This intimidation clearly shows the objective of President Alejandro Giammattei: to silence information about corruption. Flora Silvia Flores, financial director of the newspaper elPeriódico, was also arrested for the alleged crime of conspiracy to launder money.

In Nicaragua, Daniel Ortega's regime consummated its coup against the historic newspaper La Prensa, confiscating its headquarters to turn it into a cultural center of the State. There are more than 180 political prisoners without fundamental human rights, among them several independent journalists and directors of La Prensa.

In Mexico, journalists fear for their lives more than ever. It is reported that there are aggressions every 14 hours against journalists for carrying out their work, be it harassment, threats, physical attacks or even disappearances, torture, or murder.

The IAPA Bot tool lets us know which accounts had the most interaction on Twitter; in this case, the most influential tweet generated 2,471 interactions and was written by @SinLinea_Mx. The text of the tweet is: ‼️Journalists and citizens denounce harassment by INE and accuse of censorship #NoNosVanACallar.