IAPA Bot: Level of aggression against the press overflowing 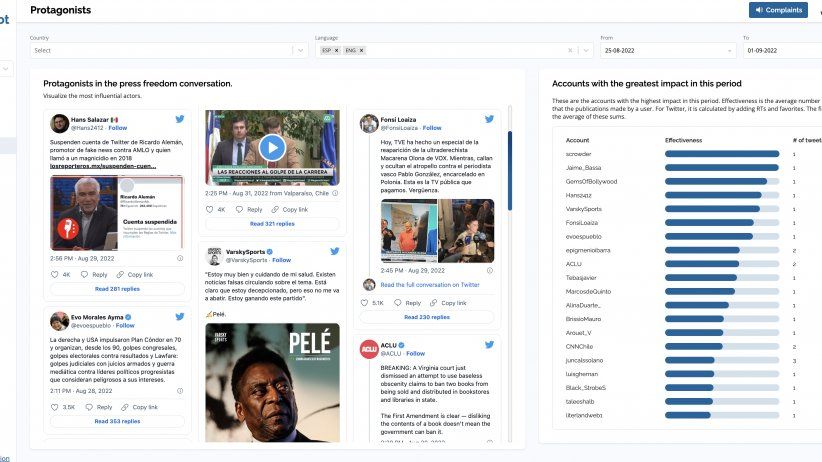 The IAPA Bot tool also shows the Twitter accounts with the most interaction.

Miami (September 2, 2022) - The murder of two Colombian journalists and the brutal violation of the human rights of several journalists by Daniel Ortega's regime in Nicaragua were the most relevant aggression this week according to the IAPA Bot, a monitoring tool of the Inter American Press Association.

Dilia Contreras, director of the program "La Bocina," and Leiner Montero, director of the radio station "Sol Digital Stereo," were shot dead on a highway in the Magdalena region, Colombia, after covering a religious party.

Authorities did not rule out the professional motive of the double crime. There are 30 reporters murdered this year in the Americas, showing a high level of aggression against journalists.

The government of Daniel Ortega in Nicaragua exhibited opponents who have been imprisoned for more than 400 days, among them several journalists. Their families denounce that they are suffering "extreme thinning" due to the poor conditions in prison.

Another journalist was a victim of aggression in Mexico. In Huitiupán, Chiapas state, Víctor Moisés Hernández, denounced having suffered physical aggression and death threats from the municipal president.

The IAPA Bot tool also shows the Twitter accounts with the most interaction. For example, the most influential tweet of the week generated 4,792 interactions and was written by @Jaime_Bassa. The tweet's text is related to the referendum in Chile and says: "That is exactly what they are appealing to, that the electorate does not know who they are voting for. Information is key to the exercise of our political rights; that's why fake news does so much damage to democracy. In this #PlebiscitoDeSalida, I #ApproveNewConstitution".