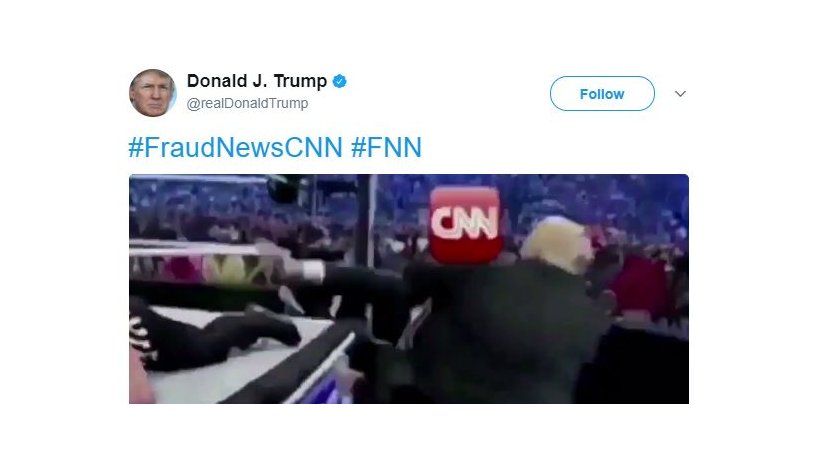 The IAPA rejected recent attacks against the press by the president of the United States, Donald Trump, and expressed its alarm regarding the president's impulsive and aggressive style which might instigate the public to acts of violence against journalists and media outlets.

Miami (July 3, 2017).- The Inter American Press Association (IAPA) rejected recent attacks against the press by the president of the United States, Donald Trump, and expressed its alarm regarding the president's impulsive and aggressive style which might instigate the public to acts of violence against journalists and media outlets.

In response to renewed assaults on the part of the president against the media as well as journalists, Roberto Rock, chairman of the Freedom of the Press and Information Committee, recalled a recent report from the IAPA which states that while it is quite commonplace for there to be some tension between the press and the White House, "the Trump Administration's rhetoric is unprecedented and threatens to undermine the news media's ability to keep the public informed about the activities of the new administration and its plans for the future of the country."

This rebuff from IAPA is based on president Trump's tweet posted on his Twitter account on July 2nd. It has to do with a short clip from a 2007 mock video showing him against the ropes of a wrestling ring hitting another man on the ground and whose face was replaced with the CNN logo. The recording ends by showing the FNN logo referring to Fraud News Network. The day before, Trump had told a group of his followers that CNN was "garbage journalism."

"It is not at all amusing that the president might be inciting violence against journalists and media outlets given that besides affecting his relationship with the press, also alienates a large sector of society which understands that the First Amendment questions the use of mockery to combat criticism," stated Rock, editor of the Mexican news portal, La Silla Rota.

Trump has on numerous occasions criticized CNN, NBC, ABC, CBS and The New York Times and The Washington Post newspapers as "fake news media," "dishonest" and "enemies of the American people", terms used by him from the time when he was a presidential candidate in order to denigrate and counteract information that he deems unfavorable.

CNN expressed in a press release that "it is a sad day when the president of the United States encourages violence against journalists." Last week the television network accepted the resignation of three of its journalists as it considered that an article authored by them and published on CNN.com regarding possible financial links between Russian and Trump's electoral campaign did not comply with the network's standards for quality and rigorousness.

In May, comedienne Kathy Griffin was fired by CNN as co-anchor of a New Year's Eve show because of a video where she held a likeness of Trump's head covered in blood by the hair, simulating a decapitation.

The IAPA has expressed great concern due to the lack of transparency from this government, characterized by holding very few press briefings in comparison with previous administrations, as well as by certain suggestions regarding the establishment of regulations for journalists as to the use of anonymous sources, and the enforcement of libel laws against the media, which would directly impact freedom of the press.

The IAPA is a non-profit organization committed to the defense and promotion of freedom of the press and freedom of expression throughout the Americas. It is comprised of more than 1,300 publications from the Western Hemisphere; with main offices located in Miami, Florida, United States of America.