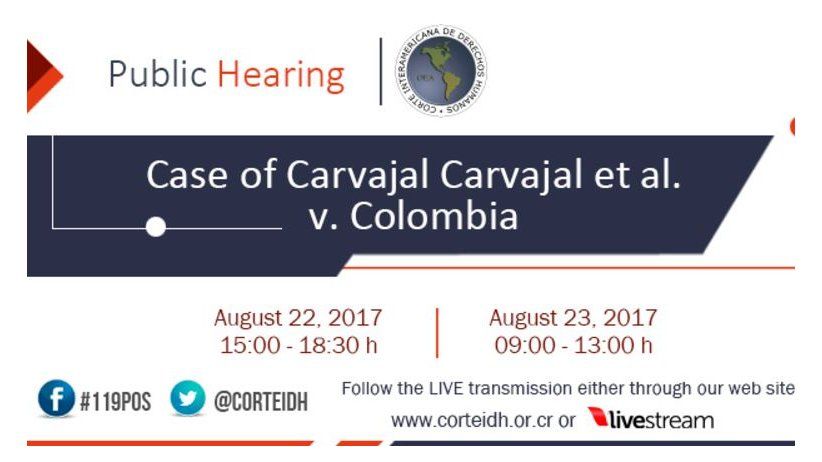 The case of the Colombian journalist, murdered in 1998, will today have it day in the IACHR Court. Beginning at 3:00 p.m. (Costa Rica time) follow the hearing here.

Carvajal Carvajal was director of Noticiero Momento Regional (regional newscast) and of the radio magazines Mirador de la Semana, Amanecer en el Campo and Tribuna Médica broadcast by Radio Sur of RCN Radio in the municipality of Pitalito, Huila province. He has also worked as a teacher in the Los Pinos School in the same city. Following his murder on April 16, 1998, the IAPA's Rapid Response Unit (RRU) in Colombia investigated the case, which was submitted to the Inter-American Commission on Human Rights (IACHR) in June 2002.

In 2015 the IACHR sent the case to the IACHR Court, which this August 22 and 23 will view the details of the "Nelson Carvajal Carvajal and family vs. Colombia Case." In the first session, which will begin this afternoon at 3:00, the IACHR will be represented by the Special Rapporteur for Freedom of Expression, Edison Lanza, and lawyer Tatiana Teurbner Guasti. In addition, Carlos Lauria of the Committee for the Protection of Journalists will speak to the IACHR Court judges about the context of violence and impunity at the time of Carvajal Carvajal's murder.

For its part the Carvajal family will be represented by IAPA Executive Director Ricardo Trotti and the lawyer of the RFK Human Rights legal team, Angelita Baeyens. The murdered journalist's sister, Judith Carvajal Carvajal, will present her testimony about the efforts made to seek justice and how the crime left a large wake of sufferings by most of the family.

The Colombian State will be represented by Juanita María López Patrón and Ángela María Ramírez Rincón, both agents of the Attorney General's Office. The State will have as a witness Lilia Yaneth Hernández Ramírez, who will declare concerning "the actions carried out by the Attorney General's Office with the objective of investigating, judging and punishing those responsible for the murder."

Tomorrow (Wednesday, August 23) the public hearing will continue in the morning with submission of the final allegations by the parties in litigation.

The IACHR Court, a judicial organ of the Organization of American States, has as its objective the application and interpretation of the American Convention on Human Rights and other treaties on rights of the inter-American human rights protection system. This is made up of Judges Humberto Antonio Sierra Porto (Colombia), Eduardo Ferrer Mac-Gregor Poisot (Mexico), Roberto F. Caldas (Brazil), Eduardo Vio Grossi (Chile), Elizabeth Odio Benito (Costa Rica), Eugenio Raúl Zaffaroni (Argentina) and Patricio Pazmiño Freire (Ecuador).