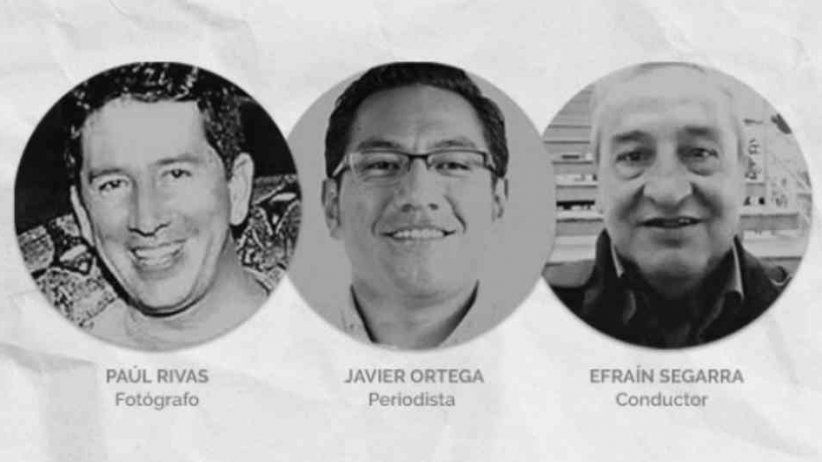 IAPA make a public call on them to continue with the same determination for the crime to be fully clarified and true justice to be done.

MIAMI, Florida (December 24, 2018)—The Inter American Press Association (IAPA) today expressed confidence that justice will be done and there will be fully clarified the murders in Colombia of three Ecuadorean journalists, despite the fact that the person implicated as the mastermind of the crimes was shot down in a military operation.

"We have the hope that justice will be done for Javier Ortega, Paúl Rivas and Efraín Segarra," declared IAPA president María Elvira Domínguez after learning that Walter Patricio Arizala, a.k.a. Guacho, who had ordered the murder of the members of the news team of Quito, Ecuador, newspaper El Comercio, was himself killed on Friday during a joint operation of the Army, Police and Attorney General's Office of Colombia.

Domínguez, editor of the Cali, Colombia, newspaper El País, offered sympathy to the families of the victims who fear that with the death of the main person pointed out as the instigator of the murders also are extinguished the possibilities of getting to the truth and information on what happened.

"We urge the governments of Colombia and Ecuador to continue investigating so that all those responsible be brought to trial. The families also are victims in this painful situation and they have the right to know what happened with their loved ones and learn each detail related to the case," added the chairman of the IAPA's Committee on Freedom of the Press and Information, Roberto Rock, editor of the Mexico City, Mexico, news portal La Silla Rota.

In April this year journalist Javier Ortega, photographer Paúl Rivas and driver Efraín Segarra were traveling from Quito to Mataje in Esmeralda province on the border with Colombia to investigate the increase in violence in that part of the country when they were kidnapped and murdered by a criminal gang headed by "Guacho."

On behalf of the IAPA Domínguez and Rock recognized the effort of the governments of the two countries from the outset to investigate and locate Guacho's whereabouts. "Now we make a public call on them to continue with the same determination for the crime to be fully clarified and true justice to be done," they declared.