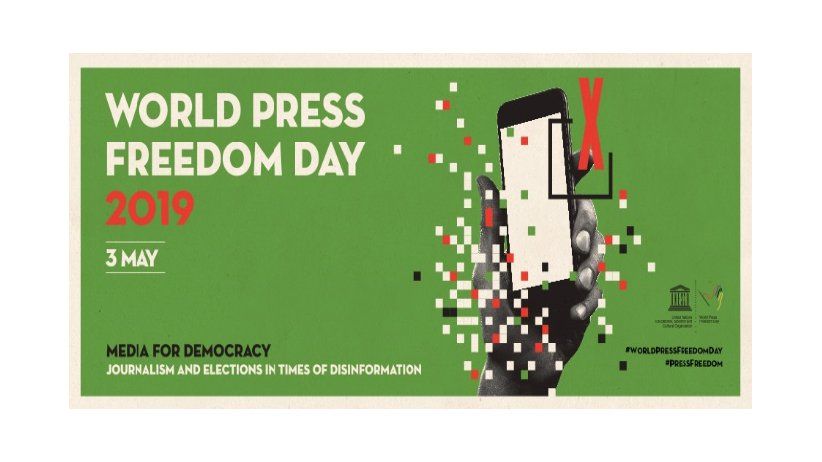 Miami, Florida (May 2, 209).– This May 3, World Press Freedom Day*, is not a day to celebrate in our Americas. We cannot celebrate when journalists Miguel Mora and Lucía Pineda continue imprisoned in Nicaragua without due process. We cannot celebrate when the authoritarian regimes of Daniel Ortega, Nicolás Maduro and Miguel Díaz-Canel suppress and censor press freedom, freedom of expression and the right of citizens to freedom of assembly and to express themselves peacefully.

Much less on this day we can forget that in the last year, since May 2018, there were murdered 26 journalists in Mexico, Brazil, Colombia, Honduras and the United States, crimes carried out by corrupt officials, bands of organized crime and criminals who have sought to silence their denunciations in the media. Neither can we be calm when in countries such as Mexico the system of protection and safety of journalists has failed and is inefficient. We cannot be satisfied when the majority of the crimes against journalists remain totally unpunished.

What concerns us is that in almost all the countries in our hemisphere there exist campaigns of stigmatization, raised by democratic leaders who seek to reduce credibility of the press in order to govern with greater comfort, such as it has been happening in Brazil, El Salvador, Guatemala, Honduras, Mexico and the United States.

We cannot be calm when freedom of the press and of expression are besieged by violent discussions that are made on social media, as well as by polarization, by the biased dissemination of information that seeks to twist elections through false news disseminated by armies of bots and cyber militants, actions that have already been incorporated as normal mechanisms in electoral processes.

We cannot celebrate when official censorship disrespects the right of Venezuelans to have access to information through any available media and platform and suppresses citizens' protests. Neither when we know that the regime in Nicaragua has broken into, shut down and confiscated news media and that, as an effect of official harassment, more than 60 Nicaraguan journalists sought refuge in other countries.

We cannot be calm when there still exists the tendency to persecute journalists for them to reveal their sources as in Canada; there are sponsored legislative bills that would affect the practice of journalism in Chile, Colombia and Costa Rica; it is applied in a discriminatory manner the right to oblivion in Argentina, Chile and Costa Rica; media are economically stifled as in Bolivia; there is restricted public access to government information in almost all of the countries, or when opinion is made a criminal offense as in Peru and in Venezuela.

All this obliges us to redouble our commitment to continue fighting, especially this year in which we reach our 75th anniversary as an organization and we are as convinced as always that freedom of the press is the biggest ally of democracy.

We want to continue contributing in this mission as we have done in these 75 years. Soon we will say present in Nicaragua, Brazil and Mexico in order to intercede before their governments and civil society in support of the journalists and freedom of expression.

We will be working in support of the principles of press freedom through a Chapultepec Index in alliance with Venezuela's Andrés Bello Catholic University to evaluate how legal and judicial rulings affect the exercise of press freedom in each country of the Americas.

We will begin a campaign of education about our Salta Declaration to educate on the rights and also the responsibilities that digital platforms, media, journalists and citizens have in the digital area or environment.

During the commemoration of our 75th anniversary at the upcoming General Assembly in Miami in early October we will renew with great enthusiasm our conviction to defend for 75 more years press freedom, the backbone of democracy.

*World Press Freedom Day which is celebrated on May 3, was established in commemoration of the Declaration of Windhoek, a document that contains principles on the defense of press freedom, drawn up in 1991 during a meeting of African journalists, launched by the United Nations Educational, Scientific and Cultural Organization (UNESCO).