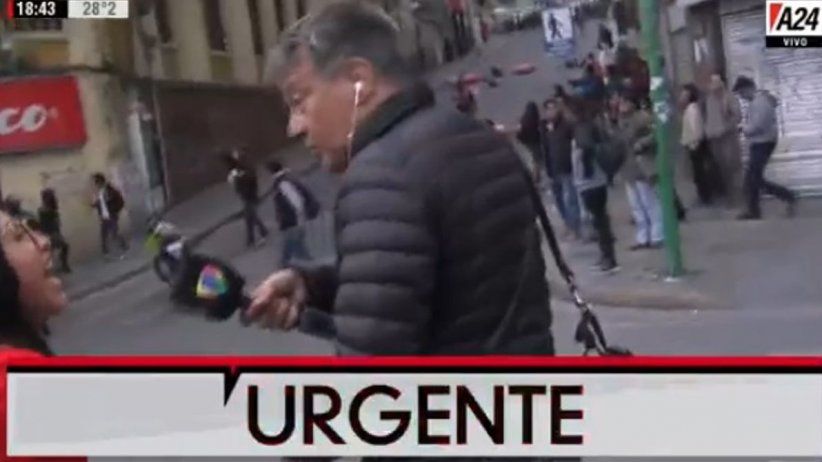 Argentine journalist Rolando Graña of A24 was scolded when he was broadcasting live, then his cameraman was beaten. (from video)

Deplores threats from the Minister of Communications

Miami (November 15, 2019) - Concern and condemnation expressed the Inter American Press Association (IAPA) for the climate of hostility against foreign correspondents in Bolivia and the statements of the Minister of Communications that threatened to expel and prosecute journalists.

In recent days, Argentine journalists sent to Bolivia to cover the political crisis affecting the country have been the target of insults, aggression and harassment by different sectors in conflict in the country. Amid the tension, the new Minister of Communication, Roxana Lizárraga, threatened to expel and prosecute foreigners and Bolivians "journalists or pseudo-journalists who are practicing sedition."

IAPA President Christopher Barnes and Chairman of the Committee on Freedom of the Press and Information, Roberto Rock, deplored the general climate of hostility against the local and foreign press, which is trying to keep the population and the international community informed about an issue of high public interest.

Argentine journalists' teams of Crónica HD, Telefé, TN and A24, among others, were threatened and assaulted while broadcasting from the streets in La Paz. Some journalists denounced the distribution of pamphlets with their photos and writings about "go home" and "hunt them".

Barnes, director of the Jamaican newspaper The Gleaner and Rock, director of the Mexican news portal La Silla Rota, agreed that the statements of the Minister of Communications are "dangerous because she validates and probably encourages violent sectors to act against journalists."

Before the acts of violence, the Argentine Foreign Ministry called on the authorities in charge in Bolivia to guarantee the physical integrity of the Argentine journalists.

The president of the National Press Association of Bolivia, Marco Dipp, said that this has been the most complicated and delicate period for media and journalists. He estimated that since October to date there have been about 64 attacks on journalists, coming from the two parties involved in the conflict.