Report to the IAPA

In this period there persisted violence against journalists, there were registered three murders and the system of governmental protection had serious operational deficiencies to support those reporters that work in the most vulnerable areas.

On March 30, María Elena Ferral, correspondent for the Diario de Xalapa of the Mexican Editorial Organization (OEM) and director of the digital newspaper Quinto Poder in Veracruz, was assassinated. He had reported death threats. Ferral worked for more than 20 years in Diario de Xalapa, covering the municipalities of Poza Rica and Papantla, where he used to report forced disappearances at the hands of the police.

On January 7 there was murdered Álvaro Ruiz, speaker and manager of radio station Radio Pichucalco 102.1 FM. Preliminary reports indicate that his body was found inside his home in the Santo Domingo neighborhood in Chiapas state.

On November 29 Fidel Ávila Gómez, a radio journalist, traveled to the locality of Altamirano in Guerrero state to participate in an event of the Cultural and Livestock Expo. His family members did not know of his whereabouts until on January 8 the Michoacán Attorney General's Office announced that his body was found inside a vehicle he owned with injuries caused by a firearm.

The protection structure for journalists has not improved. According to the Federation Auditing Office (ASF) in its 2018 Public Account to Congress the government has failed in the protection of journalists and human rights defenders. In 2018 the Protection Mechanism received 278 requests for incorporation, of which 23.4% (65) were accepted and 76.6% were rejected, with there being indicated the reasons for the rejections.

The body declared that in the Integral Protection of Journalists the Mexican government carried out separate actions and these actions to protect from risk "have failed." It added that work of the Government Department, the National Human Rights Commission, the Executive Commission for Attention to Victims and the Federal Attorney General's Office to prevent aggression, protect the life and integrity of the press, and attending to the victims and procuring justice "were carried out in a deficient manner."

The legal gaps, non-compliance with duties and the lack of technical strictness and of political will with those that operate the Mechanism of Protection for People Defending Human Rights and Journalists have produced an increase in vulnerability in the cases of journalists.

The Protection Mechanism has not consolidated as a system of prevention that would guarantee the life, integrity, freedom and safety of the people that find themselves in a situation of risk as a consequence of the freedom of expression and journalism at the state level, due to the fact that of the 32 federal entities only 25 (78.1%) signed agreements of cooperation for the "operation of the mechanism," says the ASF document.

The Special Public Prosecutor's Office for Dealing with Crimes Committed Against Freedom of Expression (FEADLE) did not contribute to obtaining justice for journalist victims of crime.

There continues a 69.5% lapse in prior investigations and a 58.6% one in investigation folders, which did not allow there to be avoided impunity in offenses, did not guarantee human rights to life, integrity, freedom and safety.

There exist several legislative initiatives that can modify the protection of press freedom.

The legal counsel of the Mexican Presidency, Julio Scherer Ibarra, announced that he will propose legislation that would balance freedom of opinion and the people's right to public dignity, according to what has been requested by President Manuel López Obrador.

Independent Senator Emilio Álvarez Icaza Longoria is putting together opinions of journalists for his bill to recognize for them professional rights and set tax stimuli to small news companies.

On February 12 congresswoman for the Morena governing party, Rocio Barrera Badillo, announced that there would not be a new law of a general nature for the protection of human rights defenders and journalists, and that in exchange she will submit four packages of initiatives to amend 12 laws.

The first package will seek to amend the law on protection that if approved would give the Federal Protection Mechanism wider reach in the country, would widen the protection measures and would guarantee an annual budget.

In the Federal Civil Code, the National Criminal Procedures Code will seek to protect the press from the excess lawsuits and sanctions for accusations of calumny and defamation.

The legislator also announced the elimination of the anachronistic Print Law.

It was not explained if she will propose a new law on public expenditure on advertising, laws that would require the investigation and punishment of offenses against journalists and if the General Victims Law and the Law on Administrative Responsibilities of Public Servants will allow punishment of those who obstruct, assault or impede the exercise of freedom of expression and of the press.

President López Obrador systematically condemns the practice of journalism with claims that the media are corrupt, voices of the previous regime and liars in their news items, above all those that are critical of the actions of his government, assuming that they are paid by those whose interests were affected with the change in government.

His criticisms can be of influential journalists such as Carlos Loret de Mola and also of foreign media such as The Financial Times, The Washington Post or El País.

López Obrador maintains that the social media are "blessed," while the traditional media lie. "It is enough to see a newspaper, El Universal, any one, and you are going to see how many lies are published. The news media that do not see us with good eyes generate false information to affect the actions of the government. The media, not all, those that do not see us with good eyes, take advantage of any circumstance to generate campaigns of defamation, distortion, false information, this is the case."

On January 28 a civil judge in second instance ordered journalist and academic Sergio Aguayo to pay 10 million pesos – approximately half a million dollars ­– to politician and former Coahuila governor Humberto Moreira for damaging his honor in a journalistic column. The following day the Supreme Court of Justice of the Nation (SCJN) ordered the case to be raised in final instance.

Aguayo had published in his column in the newspaper Reforma that the former governor of Coahuila and member of the PRI party "is a politician who unleashes a corrupt smell which, in the best of cases, was the case in terrible violations of human rights committed in Coahuila and which finally is standard-bearer of the renamed Mexican impunity."

Moreira was absolved of the charges of corruption and sued the journalist for moral damage.

Aguayo made a deposit of 450,000 pesos to avoid the greater payment of 10 million, and is in the hope that the SCIN brings up his case and issues a definitive sentence.

On February 10 the Mexico City popular circulation newspapers Metro, Pásala, La Prensa and El Gráfico published photos of the body of Ingrid Escamilla, who was murdered and decapitated by her husband. The strong images opened a national debate on the correctness of publishing those photos, their role in the re victimization of executed women, the pertinence of maintain the crime of femicide in the law, the filtration of said images by the authorities that dealt with the case and, especially, for the need to reform the type of red and police note.

The debate took a turn into condemnation of the media of popular circulation, accompanied by voices that called for the removal from circulation of the newspapers and a financial punishment. Each of the publications took a different way of dealing with the matter – from those that did not give details that would identify the victim and her address, to those that did not hold back any detail. The matter led to feminist marches condemning the newspapers, where there was absent the analysis by electronic media that also covered the case.

Rodolfo Ruiz, director of the news Web site E-Consulta, with 18 years of operation, and writer of the column "La Corte de los Milagros," is facing four lawsuits filed by the same number of officials linked to the governor of Puebla, Miguel Barbosa, a member of the Morena party, to which President López Obrador belongs. Each lawsuit, for moral harm, is for 5 million pesos and all are drafted in the same manner.

The officials have accused Ruiz of lying in public events, although they never used the right of reply nor a petition of clarification to E-Consulta. They went from public attack to the lawsuit. The four lawsuits are being filed by the same lawyers office and in all the cases precautionary embargoes are requested.

On February 27 Dámaso López Serrano was sentenced to 14 years and eight months in prison as the mastermind of the murder of Sinaloa journalist and writer Javier Valdez Cárdenas.

On March 18, nearly three years since his murder, there was convicted Juan Carlos "N," alias El Larry, as being jointly guilty of the murder of female journalist Miroslava Breach, committed on March 23, 2017. The judge ruled that the murder was the product of the journalist's publications. 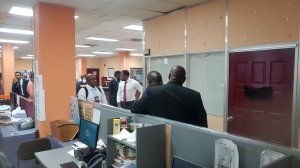