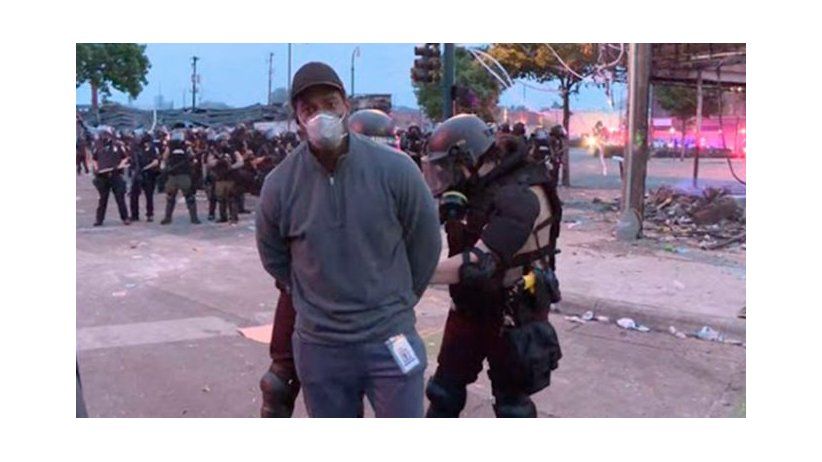 Numerous attacks, arrests and threats against journalists and members of the press covering social protests in different cities of the United States.

Miami (June 2, 2020) - The Inter American Press Association (IAPA) condemned and expressed its deep concern at numerous attacks, arrests and threats registered against journalists and members of the press covering social protests in different cities of the United States.

The protests began last week in the city of Minneapolis, in the state of Minnesota, following the death of African-American George Floyd, arrested by police on May 25. The incident, captured on video by passers-by, shows a police officer with his knee on Floyd's neck, handcuffed and on the ground. Floyd repeatedly shouted that he could not breathe.

Among the incidents is the arrest last Friday of CNN correspondent Omar Jiménez in Minneapolis while broadcasting live along with two other members of his press team. They were all subsequently released. In addition, that night, freelance photojournalist Linda Tirado was shot in her left eye with a rubber bullet, permanently losing her vision.

IAPA President Christopher Barnes, director of The Gleaner Company (Media) Limited, Kingston, Jamaica, stated, "While journalists are aware of the risks to which they are exposed during the coverage of social protests, in most of the incidents the press, who were duly identified, also became the target of the police and protesters".

In other incidents in Minneapolis, journalist Julio-Cesar Chavez and Rodney Seward, both from Reuters, were also wounded by rubber bullets; Ali Velshi and his team from MSNBC; Susan Ormiston, journalist for the Canadian Broadcasting Corporation; John Marschitz, sound engineer at CBS News were also injured.

In Oakland, California, Sarah Belle Lin, a reporter and photographer was also injured by rubber bullets, and in Louisville, Kentucky, police fired pepper spray shells at reporter Kaitlin Rust and her team from the local WAVE News channel.

Other arrests include, in Minneapolis, Tim Arvier, correspondent of the Australian 9News; in Las Vegas, Nevada, photographers Bridget Bennett, freelance, and Ellen Schmidt, from the Las Vegas Review-Journal; in Brooklyn, New York, Christopher Mathias, reporter from HuffPost, and Keith Boykin, a CNN commentator.

Protesters also assaulted Leland Vittert, a Fox News reporter and his team near the White House; and in Pittsburgh, Pennsylvania, KDKA TV photojournalist Ian KDKA TV whose camera was destroyed.

Roberto Rock, president of the IAPA's Committee on Freedom of the Press and Information and director of La Silla Rota, Mexico City, Mexico, stressed that, "when the press is attacked, the public's right to receive news is affected." He called for the attacks and arrests to stop, and the free mobilization of journalists to be guaranteed and respected.

The IAPA together with 96 other press organizations and journalists; news media and media houses; and non-governmental organizations, signed a letter from the Reporters Committee for Freedom of the Press sent to the Police and Minnesota state authorities, claiming for mistreatment of journalists during the coverage of the protests in Minneapolis.