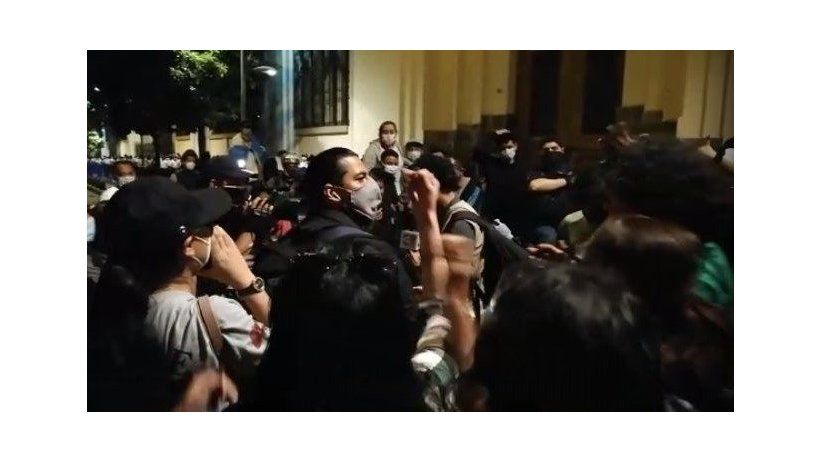 Journalists from Prensa Libre and Guatevisión were attacked while covering the incidents of November 28.  (Photo: Prensa Libre. Courtesy)

"We demand that the safety of journalists be protected, since it is essential that they enjoy guarantees that allow them to freely report on situations that affect citizens," Carlos Jornet.

Miami (November 30, 2020).- The Inter American Press Association asked the Guatemalan government to guarantee safety for the work of the press after the attacks suffered by a dozen journalists during the second consecutive weekend with social protests against the decision of President Alejandro Giammattei and the Congress in relation to the nation's budget.

The president of the IAPA, Jorge Canahuati, urged the government "to guarantee that journalists can work freely without any type of retaliation, as stated in the constitutional principles of Guatemala." Canahuati, president of Grupo Opsa, San Pedro Sula, Honduras, urged the authorities to investigate, point out and prosecute those responsible, "a message that must be sent to violent groups and security agents so that they do not continue attacking journalists."

The president of the Committee on Freedom of the Press and Information, Carlos Jornet, director of the newspaper La Voz del Interior, from Córdoba, Argentina, underlined: "We demand that the safety of journalists be protected, since it is essential that they enjoy guarantees that allow them to freely report on situations that affect citizens."

The Association of Journalists of Guatemala (APG in Spanish) asked the United Nations and the Organization of American States to send their rapporteurs for freedom of expression to the country. According to the APG, since President Giammattei assumed office on January 14, and until November 14, there have been more than 125 attacks against journalists, including, among others, pressure, threats, physical attacks, arrests, cyberattacks and judicial harassment. The organization also denounced that two journalists, Mario Ortega and Bryan Leonel Guerra, were murdered.