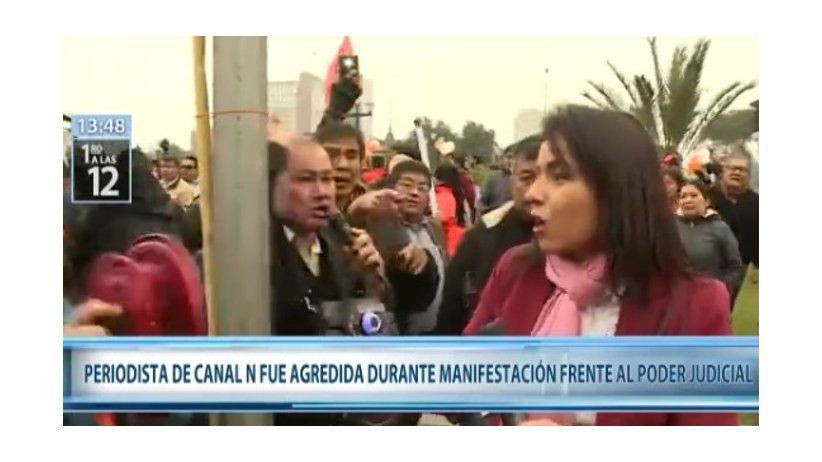 The organization has been warning about politicians in many countries who tend to exhibit anti-press behavior and attitudes.

Miami (May 20, 2021).- The Inter American Press Association (IAPA) condemned the attack on a press team in Peru and urged the authorities to investigate the events promptly and thoroughly and to identify those responsible.

A group of supporters of presidential candidate Pedro Castillo, from the Peru Libre party, attacked Canal N journalists. The attack occurred Wednesday in the city of Ayacucho in the south-central region, while the reporters were covering a rally for Castillo, who aspires to win the presidency in the second round election on June 6. Castillo said during a public presentation that he would reveal, "How much those who host television shows earn and who pays them." Later, the master of ceremonies in that same event referred to the journalists present as "mermelera press" (journalists who take bribes). Reporter Stephanie Medina was kicked and cameraman Carlos Brown was hit with a stick.

The president of the IAPA, Jorge Canahuati, condemned the act of violence and recalled "Castillo has been carrying out a stigmatization campaign against journalists and the media." He added that the IAPA has been warning about politicians in many countries who tend to exhibit anti-press behavior and attitudes. "Unfortunately, we are witnesses to the physical violence generated by the insults of people who, due to the importance of participating in democratic elections, should have full respect for freedom of the press and expression."

The president of the IAPA's Committee on Freedom of the Press and Information, Carlos Jornet, added, "This aggression against journalists is a bad indication of Castillo and his campaign group's relationship with the press and what could happen in Peru if this candidate wins the elections."

Canahuati, CEO of Grupo Opsa, from Honduras, and Jornet, from La Voz del Interior, Argentina, recalled that the Declaration of Principles on Freedom of Expression of the Inter-American Commission on Human Rights, and the Declaration of Chapultepec of the IAPA, summon governments to investigate and punish violent acts against the press which is one of the cornerstones of a democratic society.