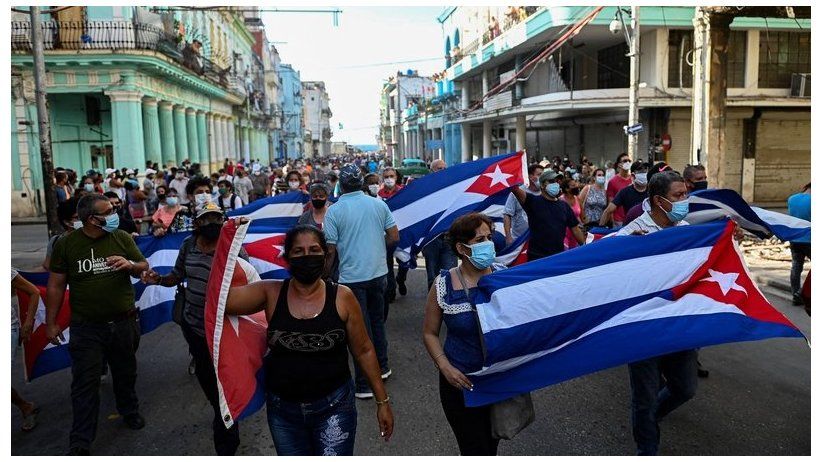 Miami (July 12, 2021).- The Inter American Press Association (IAPA) condemns the arrest and attacks by security forces against independent journalists in Cuba during the civic protests that took place on Sunday. The IAPA also was highly critical and denounced the interruption of the Internet service and the government´s use of force with the objective of "curtailing the freedoms of association, of the press and of expression."

During the protests throughout Cuba, several journalists were arbitrarily attacked and arrested. It is unknown the number of people, who were censored, and whose mobile phones and work equipment were confiscated or the number of Cubans who suffered setbacks as a result of the interruption of Internet communications. Among the independent reporters affected by the crackdown are Héctor Luis Valdés, from ADN Cuba, Ramón Espinosa, a photojournalist for The Associated Press agency, and a cameraman from that agency, who were attacked by security forces while covering the demonstrations in a central area of ​​Havana.

"We condemn the attacks by the regime against the people who were protesting, and also against the journalists who were covering the events, we particularly condemn President Miguel Díaz-Canel call to use force, with the clear intention of curtailing freedom of association, of press and expression," said Jorge Canahuati, president of IAPA and Grupo Opsa, Honduras.

The recent protests, "are a reflection of the fatigue felt by Cubans faced with a government that continues to believe that it owns the life and destiny of its citizens," said Carlos Jornet, president of IAPA´s Commission on Freedom of the Press and Information, and director of La Voz del Interior, from Argentina. "We hope that the regime does not seek to create another black spring," he added, recalling the crackdown and the arrests and jail sentences that many Cubans suffered after the social protests in 2003.

Thousands of Cubans protested this Sunday against the government because of the generalized shortage of essential products, and shouting "freedom" "homeland and life!" or "Down with the dictatorship" and calling on the government to "leave!" among other slogans.

The protests were broadcast live on Facebook just before the Internet connection service was suddenly interrupted throughout the country, according to 14ymedio digital news outlet.

In its biannual report, the IAPA denounced the worsening of conditions in Cuba, including threats to the exercise of freedom of the press and expression and the use of the state monopoly Telecommunications Company of Cuba (ETECSA), to silence independent journalists by suspending Internet and telephone service, a situation that according to Canahuati and Jornet "now extends to all Cubans who express their discontent against the dictatorship."