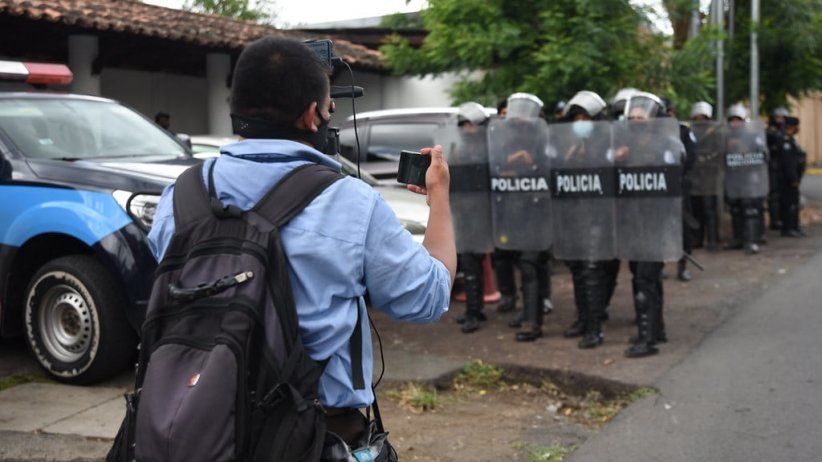 Commissioner Urrejola: "Nicaragua does not breathe democracy or civil liberties"

Miami (July 13, 2021) .- The Inter American Press Association (IAPA) delivered to the Inter-American Commission on Human Rights (IACHR) a critical report on "the chaotic situation in Nicaragua" and on the systematic violation of freedom of the press and of expression by the regime of President Daniel Ortega.

The report prepared after a virtual mission on Nicaragua from June 28 to July 2, was presented during a public online act, and included the participation of IACHR President Antonia Urrejola, and Special Rapporteur for Freedom of Expression Pedro Vaca; the IAPA President Jorge Canahuati, also from the OPSA group, Honduras; Carlos Jornet, president of the Committee on Freedom of the Press and Information, of La Voz del Interior, Argentina, and IAPA Executive Director Ricardo Trotti.

IAPA President Canahuati expressed his confidence that by submitting the conclusions of the report to the IACHR and the Office of the Special Rapporteur, "the hope of many Nicaraguans will be preserved, those who were interviewed and who asked us to raise their voices so that the international community does not forget them and seek remedies to neutralize the dictatorship." Canahuati expressed his solidarity with Nicaraguan independent journalists and the media who he said "continue efforts to report despite the general climate of anxiety."

Commissioner Urrejola highlighted the importance of the IAPA report and condemned the fact that in Nicaragua "it is not possible to protest without being immediately silenced." She said that there is a de facto state of emergency in the country and that "Nicaragua does not breathe democracy or civil liberties."

Committee on Freedom of the Press and Information President Carlos Jornet, who addressed the results of the virtual mission, stressed that the government "seeks to silence all who question the concentrated power of the ruling married couple." He said that one of the interviewees told the IAPA delegation that "the silence of the street can be heard," a situation that is also observed as a result of the progressive silence of social media. "Surely, the regime is exasperated by the fact that there are brave journalists, determined not to shut up and continue telling the country and the world what is really happening in Nicaragua," said Jornet.

After holding meetings with journalists, media managers, opposition leaders, academics, businessmen, representatives of civil society and the Catholic Church, the IAPA concluded that "a fence is being built around free journalism and it is closing day by day."

Jornet explained the main problems in the exercise of journalism in Nicaragua: "the exodus of media personnel and managers; difficulties in accessing essential goods; pressure on advertisers; police checkpoints in front of newsrooms or journalists' homes; stigmatization and threats with the aim of provoking self-censorship; reduced activity in the social networks for fear of being persecuted; lack of access to public information; concentration of the media in the hands of the State or the ruling family, and the growing request by sources to not be consulted or mentioned."

Rapporteur Vaca highlighted the importance of the report. He stressed that the environment of self-censorship that exists in Nicaragua is of great concern, plagued by stigmatizing statements by high-ranking authorities, and said there is harassment, arrests, judicial persecution and raids, among other signs of repression. He also highlighted the fundamental role played by the Nicaraguan press in this election year and thanked them for their courage.

Jornet said "when there is no law, justice or freedom of expression in a country, as clearly we see from the mission to Nicaragua, there are no minimum conditions for a democratic life."

Jornet said that what is "urgently needed" is to guarantee the full exercise of the freedoms of expression, of the press and of assembly, key to reestablishing an open and plural debate, which the government insists on aborting and without which it is impossible talk about the validity of democracy." Jornet added that in any case, "there is only a semblance of electoral processes to try to give a sense of legality to an autocratic regime which today is uncontrolled after almost three decades of progressive concentration of power."