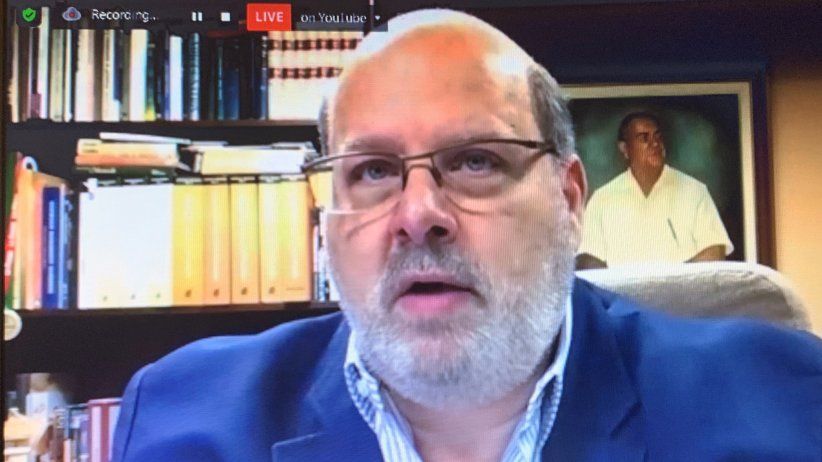 Jorge Canahuati, CEO of Grupo Opsa of San Pedro Sula, Honduras, will continue as IAPA president until October of next year.

Miami (October 22, 2021) - The Inter American Press Association (IAPA) extended for one more year the term of office of the organization's president, Jorge Canahuati, who took office this afternoon at the close of the 77th General Assembly after four days of work.

Canahuati, executive president of Grupo Opsa of San Pedro Sula, Honduras, will continue as IAPA president until October of next year. He had assumed his mandate at the 76th General Assembly in October 2020.

Below is the speech Canahuati gave this afternoon:

In IAPA there is a group made up of former presidents. They have a specific task: to preserve the tradition and wisdom of the organization. They are also the ones who nominate the next directors. I was meant to join that group and enjoy my well-deserved "retirement" after hard work, but it seems they still don't think I am worthy to join them, or they don't want me - because they forced me to be president for one more year.

All kidding aside, I feel honored, but above all flattered and privileged to continue at the head of this institution. Thank you very much for your confidence. I accept this new challenge with the same enthusiasm I had on the first day of my term last year - and I hope to be able to put all my experience to good use in the coming year.

It is a titanic task in favor of our industry. The pandemic has deepened and unleashed a crisis that has been affecting us as an industry for decades.

We are facing a major dichotomy. Never in history has the media been so revalued in the eyes of audiences and as the mainstay of democracy - but at the same time, it has been economically weakened. We know that any sustainability strategy depends, first, on the quality of content and, second, on innovation and the way in which we embrace new technologies. This is the media's greatest challenge and responsibility.

The fragility of the industry demands responsibility from all sectors. We are not the only ones calling for it. This year it was António Guterres - Secretary General of the United Nations. He called on the international community to seek joint solutions for the media industry. He considered that we are in a dangerous time, he spoke of "media extinction" - with an estimated loss of 30 billion dollars in the last year. He called for ensuring sufficient funds - both private and public - so that the media can continue to fulfill their essential role in societies.

This 77th General Assembly of the IAPA - over the four days - reflected that dichotomy. We saw how the media, from Clarín to Vocento, use technology to find new audiences, or how The New York Times and El País of Spain have the quality of content as their main effort for sustainability. We saw the value of journalism for truth and democracy with the findings of the Pandora Papers - but also how Daniel Ortega or Nicolás Maduro are raging against La Prensa and El Nacional. And we also learned, unfortunately, that the government of Colombia backed out on some funds it was going to provide to the media to help overcome the crisis and embrace the digital transformation.

And we also had the opportunity to talk about the immense power of the big digital platforms. That power they can use to help the media - but also to continue to hurt them. The platforms must, at last, consider that they are co-responsible for the crisis in our industry. They have absorbed between 60 and 80 percent of advertising globally - and continue to use the news content that costs us work and a lot of money, to continue generating profits that they do not share.

In this sense, I want to be emphatic. We will continue to work with the other regional and global media associations as we did this year. We will weave new strategies to continue to ask for payment for content and to closely watch what is being achieved in Australia, Europe, the U.S. and Canada - through voluntary or legally binding agreements. That doesn't mean that we are not grateful for all the programs that the big platforms offer to the media. But it also doesn't mean that we don't continue to call for agreements that should be fair, equitable and universal.

This year I also want to emphasize the need to continue seeking partnerships with different sectors - both public and private - to help the media, as Guterres called for. That is why we will try to continue seeking funds through official mechanisms, but always through policies that must be transparent, non-discriminatory and respectful of the editorial independence of the media. I believe that organizations such as the Central American Bank for Economic Integration - which was represented at this assembly, or the Inter-American Development Bank - which was with us in April, and other organizations such as the World Bank and the Andean Development Corporation, can help with the media emergency.

This doesn't mean that we are after handouts, subsidies or that we are the new needy of society. Rather, as I have said before and I ratify now, there must be a social responsibility on the continuity of the media. In communities that have been left without media or with weak media, fake news, misinformation, lies, conspiracy theories, injustice and corruption have increased.

The viability and permanence of independent journalism and media are essential for free, fair and democratic nations.

This coming year we will continue to work on agreements with organizations such as Mexico's Alianza de Medios, Colombia's FLIP and the Robert Kennedy Group in the U.S. to continue fighting against the impunity that surrounds violence against journalists. As we learned yesterday - according to this year's data from UNESCO - seven out of ten women journalists experienced online violence.

Therefore, it is urgent we take measures to reduce the structural and cultural inequalities that affect women and reduce the gender gaps in our newsrooms - and especially in the media's executive boards. During these days we had the opportunity to listen to women leaders in journalism, such as Gabriela Cañas, Pepa Bueno, Ana María Reyes, Martha Ramos, Camila Zuluaga, Antonia Urrejola, Argelia Perozo, María Elvira Domínguez, Estephanía Pérez, Erika Guevara, Gabriela Vivanco, Inés Aizpun, Maribel Pérez, Susana Mitchell, Leonor Mulero, Florencia Fernández, Emilia Díaz-Struck, Mónica Almeida, María Lorente, Ivett Chicas, Candela Martin de Cabiedes, Nohora Galán and María Cristina Capelo - to name a few. We have listened to you and we know that with your example and your efforts we will forge more plural and diverse media. We are also committed to developing more events to highlight women's leadership in our industry.

In the coming weeks, I promise you that we will have outlined the details of our new strategies for this year. I will first listen to everyone and especially to those I have asked to help me in this task, which - I want to emphasize - will be aimed at continuing to support our members, to make the media sustainable and able to continue contributing to the essential task of defending and promoting freedom of the press and freedom of expression - as stated in our Chapultepec and Salta declarations.

In this new year, I have asked to join me as committee chairmen:

In Freedom of the Press, Carlos Jornet, Argentina, to whom I reiterate my appreciation for his leadership this year - and knowing that with Carlos we will be very well represented.

In the subcommittees of that commission, I have asked Armando Castilla, Mexico, to be in charge of Chapultepec; Juan Francisco Ealy Lanz-Duret, Mexico, of Impunity; and Laura Puertas, Panama, of Salta.

and in Internet, Martha Ramos, Mexico.

I also know that I will continue to be joined by the presidents of the Press Institute and Scholarships: Ernesto Kraiselburd, Argentina and Gilberto Urdaneta, Venezuela - respectively. As well as José Roberto Dutriz - as president of the Executive Committee, and, especially, I will continue to count on the strong support of Michael Greenspon, USA - as first vice-president of the IAPA, and Roberto Rock, Mexico - as second vice-president.

I thank all of them in advance for the work we will be doing in the coming year - always in line with our mission and the professional interests of our more than 1,000 members.

It is my fervent wish and my promise to work so that this year we can contribute to further enhance society's revaluation of the media and of our essential mission as IAPA - in defending freedom of the press and helping to build more democracy.

Thank you very much.