It has been a bleak six months for journalism in the Americas, says IAPA at conclusion of meeting 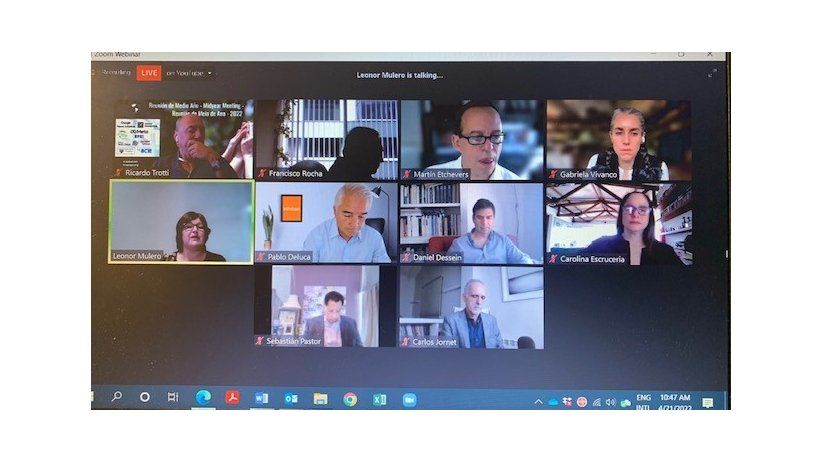 Miami (April 21, 2022) - The Inter American Press Association (IAPA) presented its conclusions at the close of its virtual Mid-Year Meeting, denouncing an increase in the last semester in aggressions, imprisonment and forced exile against journalists, as well as attacks against media outlets, judicial harassment, stigmatization and a balance of 15 murders of journalists. The meeting also urgently addressed the need to ensure the sustainability of the media in the post-pandemic period.

The IAPA also highlighted the takeover of two newspapers in Venezuela and Nicaragua and restrictions on access to information.

Consult the conclusions, reports, resolutions and speeches in this link: https://en.sipiapa.org/notas/1215028-2022-midyear-meeting

The following are the Conclusions of the Mid-Year Meeting, held April 19-21:

The mid-year meeting of the Inter American Press Association (IAPA) - held virtually from April 19-21, 2022 - concluded that increasing violence against journalists is the main challenge to the free press in the Americas.

In the last six months, 15 journalists were murdered (10 in Mexico, three in Haiti, one in Guatemala and another in Honduras) - thirteen of them in the first three months of 2022.

Impunity for these crimes continues to be a cause for concern. This year, nine cases of murdered journalists in Colombia in 2002 will be subject to the statute of limitations.

In Cuba, Nicaragua and Venezuela, journalists and the media are unusually frequent victims of persecution and repression by totalitarian governments.

The IAPA approved a resolution on Nicaragua, in which 27 national and international press organizations commit themselves to an action plan to restore freedom of the press and freedom of expression as essential guarantees to reestablish democracy in this Central American nation.

The independent press in Nicaragua experiences systematic persecution, oppression and widespread censorship - atrocities resulting from the hijacking of public powers and the demolition of civil society structures.

"The government jailed opponents, persecuted dissidents, closed civil society organizations, exiled journalists and confiscated universities and media outlets" - states the resolution in outlining some of the atrocities perpetrated by the regime of Daniel Ortega and Rosario Murillo.

The action plan includes, among other items, "requesting multilateral organizations to restrict the granting of credits and non-humanitarian aid until the government releases political prisoners, returns the facilities of La Prensa, Confidencial and 100% Noticias; allows the return of media and journalists from exile and offers guarantees for their work, as established in the Inter-American Democratic Charter."

The Nicaraguan embassies in each country will be asked to release political prisoners - including journalists Miguel Mora, Miguel Mendoza and Jaime Arellano - as well as members of the board of directors of La Prensa: Cristiana Chamorro, Pedro Joaquín Chamorro and Juan Lorenzo Holmann Chamorro.

To the seizures of Confidencial and 100% Noticias - which took place before this semester - were added those of La Prensa, also in Nicaragua, and El Nacional, in Venezuela.

Also of concern were the arson attacks against four media outlets - two in Argentina and two in Colombia. Journalists in Cuba, El Salvador and Venezuela were targets of digital surveillance. The government of Nayib Bukele, in El Salvador, used Pegasus software to monitor journalists and media outlets. The regime of Nicolás Maduro in Venezuela blocked Internet portals and censored access to the internet in general - using international telecommunications companies.

The reform of the Penal Code in Cuba increases penalties for contempt of authority, creates offenses to penalize users of social networks and punishes "clandestine publications" with prison and fines. Restrictive projects emerged in Aruba - with the media law, and in El Salvador - with the anti-gang statute that criminalizes media and journalists.

In Brazil, President Jair Bolsonaro asked private companies to boycott the media by holding back from contracting advertising. In Peru, the Public Prosecutor's Office opened investigations against journalists for reports on the Lava Jato case and other coverage of public corruption. The Peruvian president and his ministers repeatedly threaten critical media with the loss of official advertising. Threats for critical content also occurred in Guatemala, El Salvador and Mexico.

Serious judicial harassment was reported in Argentina, Brazil, Cuba, Guatemala, Nicaragua, Panama, Paraguay, Peru and the United States. In the United States, lawsuits against the media for libel and court summons to journalists increased. As a result, several U.S. states are passing laws to dismiss costly and meritless lawsuits.

There were other positive developments in the last six months. In Honduras the Secrecy Law was repealed; in Paraguay a bill on the protection of journalists is moving forward, and in Puerto Rico bills were introduced to protect confidential sources. In Brazil, a sentence was passed for the murder in Paraguay of Pablo Medina, of ABC Color, and in Ecuador, the Inter-American Court of Human Rights ruled in favor of El Universo, its directors and a columnist - in a lawsuit filed by then President Rafael Correa.

The Canadian government is promoting a law to force large digital platforms into paying the media for the use of content - and created a special fund to support local journalism and favor its digital transformation.

Along these lines, the IAPA meeting once again discussed the urgency of ensuring the sustainability of the press. This includes receiving - without further delay - a fair compensation from the large digital platforms for the lucrative use they make of the content generated by the media.

The economic crisis of the media has deepened because digital platforms absorb a very high percentage of digital advertising. With their technology, audience data, economic resources and, above all, with journalistic content, these supranational companies have created a very successful revenue model - to the detriment of the newspaper industry, said IAPA President Jorge Canahuati. "We are not asking for gifts or subsidies (...). We are claiming our royalties. (...) We cannot evade our responsibilities and the platforms should not evade theirs either," he added.