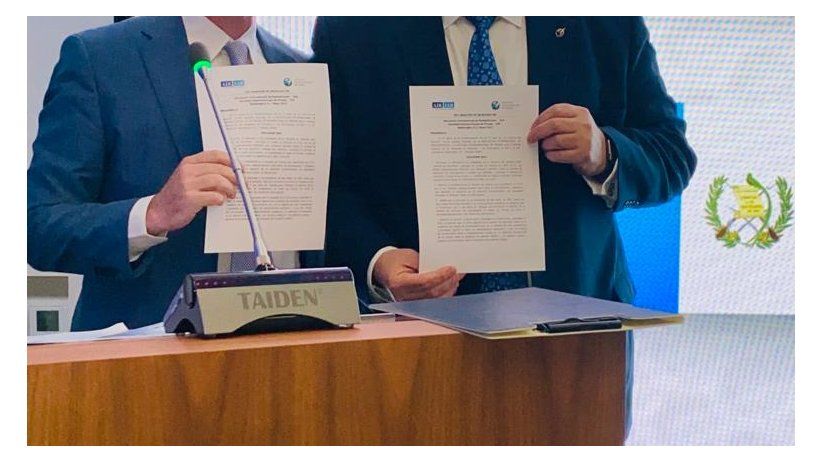 The Declaration of Washington encourages both institutions to continue working with a joint plan in favor of press freedom and media sustainability in the Western Hemisphere.

Washington, DC (May 25, 2022) - The Inter American Press Association (IAPA) and the International Association of Broadcasters (IAB) renewed last night in this city their commitment to fighting for press freedom in the Americas because of the "21st-century, threats and actions that threaten the existence of journalism and free and independent media persist around the world."

In a special ceremony, within the framework of the 48th General Assembly of IAB, at the headquarters of the National Association of Broadcasters (NAB), the presidents of the IAPA, Jorge Canahuati, and IAB, Eugenio Soza Mendoza, signed the Declaration of Washington. The document encourages both institutions to continue working with a joint plan in favor of press freedom and media sustainability in the Western Hemisphere.

This 2022 declaration is the fifth signed by both entities in their eight-decade long life, after the agreements of 1952 (Panama), 1973 (Caracas), 1991 (Sao Paulo), and 2003 (Miami). In addition to renewing the precepts of freedom of expression and media independence, the current agreement focuses on the search for solutions to the new challenges of the digital era.

In his inaugural speech and quoting one of the points of the document, Sosa Mendoza said, "Governments should promote and establish the necessary legal conditions for national and local media to prosper in the new digital era, with equal opportunities vis-à-vis global digital platforms."

For his part, Canahuati, CEO of Grupo Opsa, Honduras, referred to the solidarity and union of both institutions and their fighting spirit in favor of media sustainability, "an intrinsic aspect of media independence and the role they play in a society."

In one of its most relevant points, the declaration states, "International instruments and local legislation on copyright should establish effective protection mechanisms against the unauthorized and unfair use by third parties of the content produced by the media, regardless of the technological modality or platform used for its dissemination."

Curtis LeGeyt, president of the NAB and host of the assembly, and Pedro Vaca, special rapporteur for Freedom of Expression of the Inter-American Commission on Human Rights, were also speakers. Vaca, who took office in October 2020, praised the historic decades-long struggle of both institutions on behalf of press freedom and freedom of expression.

Canahuati is leading an IAPA delegation stationed in Washington, DC, through May 27 for a series of interviews with U.S. lawmakers and officials on press freedom performance in the Americas and media sustainability.

In addition to Canahuati, the IAPA mission is composed of Carlos Jornet, chairman of the Committee on Freedom of the Press and Information, the editor of La Voz del Interior, Argentina; Martín Etchevers, chairman of the Committee on Legal Affairs, Manager of External Relations of Grupo Clarin, Argentina; Andrea Miranda, member of the Board of Directors, Editor-in-chief of Grupo Debate Media, Mexico; Sebastián Pastor, General Secretary of the Association of the Media of Honduras (AMC, in Spanish) and Executive Director of Fundación Televicentro, Honduras, and Ricardo Trotti, IAPA Executive Director. In addition, Gilberto Urdaneta, member of the IAPA Executive Committee, representatives of the Reporters Committee for Freedom of the Press (RCFP), Lisa Zycherman, deputy legal director and policy advisor, and Sasha Dudding, attorney-at-law, will also be part of the delegation at various meetings.