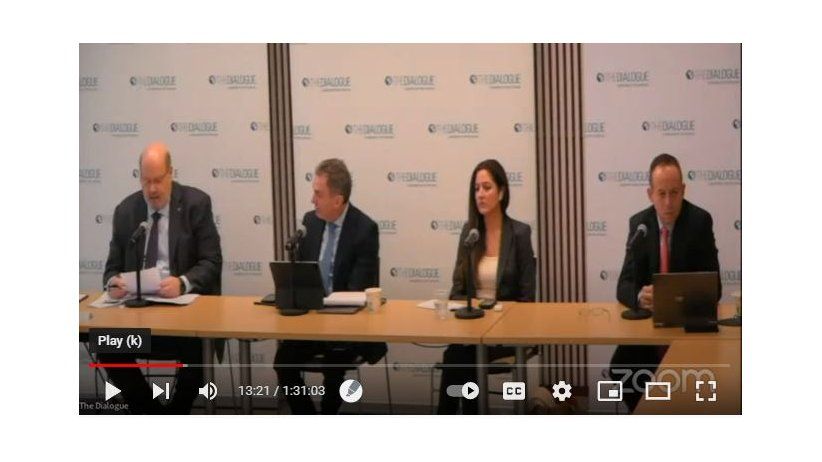 Washington, DC (May 26, 2022) - Media experts reiterated that digital platforms should pay a fair and reasonable remuneration for using the content they generate. They made this argument at a discussion panel on the sustainability of the news industry organized by the Inter-American Dialogue (IAD).

During the presentation "Media Sustainability in the Big Tech Era," IAPA President Jorge Canahuati Larach said, "The good economic health of the media is a fundamental attribute of their independence, which is essential for the role that the media have in a society."

Canahuati, CEO of Grupo Opsa, of Honduras, said that the pandemic accelerated the economic crisis of the newspaper industry, adding to the deterioration of its main livelihood, advertising, which in the digital sphere was absorbed in a high percentage by the Big Tech.

Danielle Coffey, Executive Vice President and General Counsel for the News Media Alliance of the United States, emphasized that thanks to the Internet, "the audience and the demand for more content has increased tenfold in the last decade." Still, paradoxically, "media revenues have been reduced by 50%." She added that this anomaly is because Facebook and Google keep the profits from distributing news content and the advertising they generate with it.

Coffey said it was strengthened due to regulations in other countries regarding the "Journalism Competition and Preservation Act (JCPA)" bill. She explained that the law would allow and oblige the media and platforms to negotiate a fair price for news content.

In response to the moderator Santiago Canton, Director of the IAD's Peter D. Bell Rule of Law Program, Martín Etchevers, chairman of the IAPA Legal Affairs Committee, said that while "the initiatives of Google and Facebook to reach voluntary agreements with the media are valuable, they are far from being fair and reasonable." Nevertheless, he added, "We have to sit down to achieve that the compensations be of common agreement."

Regarding the platforms' resistance to paying for news content, Etchevers, executive of Grupo Clarín, Argentina, said: "In places where there has been a legal approach (Australia and countries of the European Union), much more relevant compensations were reached, even before the mandatory legal negotiation was applied."

Etchevers said he does not understand why the platforms are reluctant to pay for an intellectual creation such as news when the value of music or a cinematographic product is not discussed. "Why do we have to discuss the value of news content when it is comparable in terms of protection to any other creation?" he asked.

Canahuati and Etchevers are part of an IAPA international delegation that will remain until May 27 in Washington, DC, in meetings with U.S. members of Congress and officials, ambassadors of the Organization of American States, and the Secretary-General of that organization, Luis Almagro, on issues of press freedom and media sustainability.

Also on the IAPA mission is Carlos Jornet, chairman of the Committee on Freedom of the Press and Information and editor of La Voz del Interior, Argentina; Andrea Miranda, member of the Board of Directors, Editor-in-chief of Grupo Debate Media, Mexico; Sebastián Pastor, Executive Director of Fundación Televicentro, Honduras; and Ricardo Trotti, IAPA executive director.

In addition, IAPA Executive Committee member from El Regional del Zulia, Venezuela, Gilberto Urdaneta, as well as representatives of the Reporters Committee for Freedom of the Press (RCFP), Lisa Zycherman, deputy legal director and policy advisor, and Sasha Dudding, attorney, participate in several of the meetings.

Other relevant aspects that emerged from the panel

Canton: "The weak economic situation in which the media find themselves represents a threat to freedom of expression and, as a consequence, to the strength of democracy." Referring to regulations in other countries, he said: "The objective for our region is not to copy external solutions, but to create one that works in the Americas' political, social and economic context."

Canahuati: "Due to the economic crises, we see how the sands of the news deserts are expanding in all countries." On the consequences, he added: "Without quality and independent local information, communities tend not to engage in electoral processes; corruption, injustices, and human rights violations increase."

Coffey: "It is important to remember that there is nothing comparable to a sustainable right. We cannot rest on benevolent payments outside of regulations or the legal realm. They will never reflect or come close to reflecting true market value because, by definition, there is always a dominant monopoly that enjoys the status quo in a broken market."

Etchevers: "Latin America is the region in the world where traditional advertising has been destroyed the most, and it is not compensated by digital advertising. The growth of digital advertising does not compensate for the losses of traditional revenue sources. It is a phenomenon that crosses the entire newspaper industry and must be addressed as it was done in Canada, Europe, and Australia, in a transversal way to the entire newspaper industry."