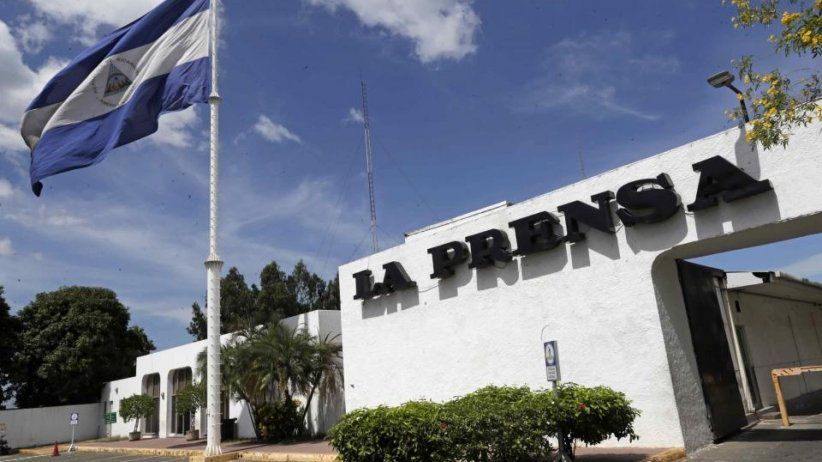 Miami (August 25, 2022) - The Inter American Press Association (IAPA) condemned the government of Nicaragua for the consummation of the robbery and dismantling of the facilities of Editorial La Prensa in Managua, which "corroborates the evident official persecution against independent journalism in that country."

Last August 23, the regime of Daniel Ortega and Rosario Murillo gave the order to dismantle La Prensa, whose facilities were robbed in August 2021 and occupied by the Police since then. In the building, the regime inaugurated a cultural training center. The value of the confiscated assets, including real estate, a printing press, and a commercial printing press, is estimated at more than US$10 million.

Previously, the regime also confiscated other media, including Confidencial and 100% Noticias, whose headquarters were converted into a mother's home and a care center for addicts.

The IAPA expressed solidarity with the directors and staff of La Prensa, who yesterday responded to the regime with an announcement on its website: "No dictatorship has shown such viciousness against the values represented by La Prensa as that of Daniel Ortega and Rosario Murillo." Furthermore, the statement emphasizes: "La Prensa has faced three dictatorships" it has also "suffered closures, imprisonment of directors and journalists, the assassination of director, Pedro Joaquín Chamorro Cardenal, on January 10, 1978, bombing and burning of its facilities, siege by fanatic mobs, censorship, customs blockade of supplies" that made its printing impossible. It also claims for "the occupation and theft of its property, its facilities and work equipment."

Jorge Canahuati, president of the IAPA, said: "With great brazenness, the regime legalizes and consummates the usurpation of all the property and the building of La Prensa, which corroborates the evident official persecution against independent journalism in that country."

Canahuati, CEO of Grupo Opsa of Honduras, recalled, "we are facing the regime that has become the greatest repressor in the Americas."

Last month, journalists, editors, photographers, and newspaper staff had to leave the country "to protect their safety and freedom," according to La Prensa, which continues to operate digitally from exile. The government also imprisoned the newspaper's general manager, Juan Lorenzo Holmann Chamorro, regional vice chairman of the IAPA's Committee on Freedom of the Press and Information, and La Prensa board members Cristiana Chamorro and Pedro Joaquín Chamorro. They were sentenced to long prison terms without due process.

The chairman of the IAPA's Committee on Freedom of the Press and Information, Carlos Jornet, said: "The regime manipulates and uses all the resources at its disposal to eliminate uncomfortable media such as La Prensa, violating the Constitution which prohibits such acts."

Jornet, the editor of La Voz del Interior, Argentina, added: "The media, press associations, and international organizations cannot step aside and remain silent in the face of this severe violation of press freedom in Nicaragua."

Canahuati and Jornet also warned of similar harassment against independent media in other countries. In the same way as La Prensa, in January, the government of Nicolás Maduro consummated the robbery of the facilities of the Venezuelan newspaper El Nacional. After a rigged court ruling in favor of Diosdado Cabello, the government confiscated the newspaper's building intending to open a journalism school in that place. Previously, in May 2007, the government of Hugo Chávez took off the air the RCTV channel, the one with the highest audience in the country, with the argument that its concession had expired. Instead, Chavez opened a new media outlet in that building, which operates with the equipment stolen from RCTV.

The IAPA reiterated the validity of the Declaration on Nicaragua, signed by 27 national and international press organizations last April. The document denounces the dictatorship, condemns the forced exile of more than 120 journalists, calls for the return of the facilities of La Prensa, Confidencial, and 100% Noticias, and demands the immediate release of journalists Miguel Mora, Miguel Mendoza, and Jaime Arellano, as well as the members of the board of La Prensa.