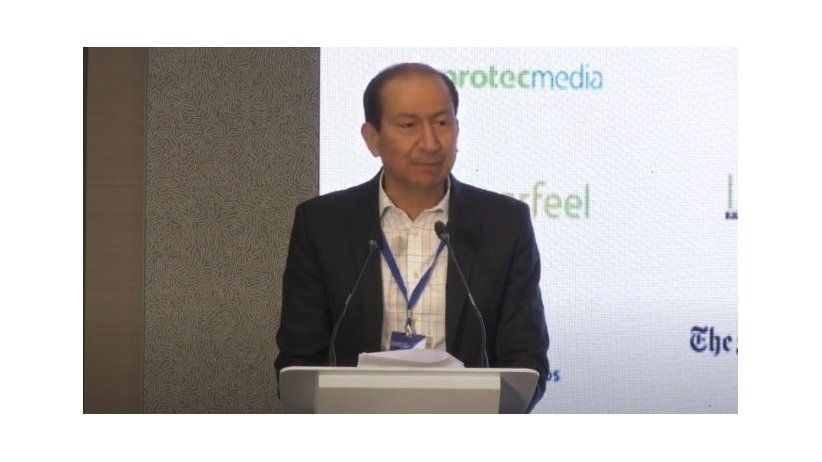 Andrés Mompotes, director of El Tiempo, Colombia, reads the conclusions of the assembly.

"There has been a worrying and marked decline in freedom of the press in the Americas."

Madrid (October 30, 2022) - The Inter American Press Association (IAPA) concluded its 78th General Assembly here today with the presentation of the conclusions after four days of meetings.

"There has been a worrying and marked decline in freedom of the press in the Americas. This is evidenced by the increase in the murder of journalists - as well as the intensification of persecution and judicial criminalization practices that lead to the detention and exile of members of the media in the continent.

This panorama, which generates alarm and undermines the democratic environment in the region, is confirmed in the biannual reports of each country approved by the 78th General Assembly of the Inter American Press Association (IAPA) - which met in Madrid after more than two years of virtual meetings due to the pandemic.

The 25 journalists murdered in the last six months generated the greatest condemnation and indignation on the part of the more than 200 media editors who attended the meeting. The figure rises to 40 if we consider the period since the 77th Assembly - held in October 2021.

Mexico was once again the country with the highest number of victims, with 11 murders of journalists and media workers since last April - with the Mexican authorities failing to effectively combat this painful tragedy.

The other countries where murders were recorded were Colombia (3), Haiti (3), Ecuador (2), Honduras (2), United States (1), Paraguay (1), Brazil (1) and Chile (1). Moreover, in Colombia, amid impunity, three cases of journalists murdered in 2002 fell under the statute of limitations.

During the meeting, the IAPA Press Freedom Award was presented as a posthumous tribute to 20 journalists who were murdered in Mexico during the last 12 months.

The assembly urged governments and authorities to give priority to investigations that will lead to the capture of those responsible for the murders of journalists in the region. It also urged the promotion of measures to guarantee the protection of journalists, an issue that was also discussed during the sessions, with the aim of creating additional mechanisms and systems that contribute to strengthening the safety of members of the media at risk.

In this regard, Ecuador and Paraguay are creating protection systems for journalists - in addition to those of Brazil, Colombia, Honduras and Mexico.

But it is not only through murder that they try to silence the voices of a free press that investigates, denounces and questions. In this period, persecution through intimidation and judicial criminalization led to the exile of 29 journalists, and 15 journalists and media workers remain in jail - often in subhuman conditions - either due to ongoing cases or convictions handed down without fair trials.

The case of Nicaragua - under Daniel Ortega's regime - remains the most alarming. Six convicted journalists remain in jail, while two employees of the newspaper La Prensa are still in custody. At least 15 journalists have gone into exile and there are now more than 150 who have experienced the same situation in the last four years. The government continued to close media outlets, including several Catholic Church radio stations, and cut the signal of CNN in Spanish.

Cuba is another critical protagonist of exiles and arrests that seriously harm freedom of expression. One journalist and two digital influencers remain in jail, while four citizens are in custody for criticizing the government on social networks. In addition, three independent journalists went into exile and another 20 were "offered" the option of leaving the country - with the threat of not being allowed to return.

Also, in El Salvador two journalists remain in jail, while 10 more went into exile due to the hostility of Nayib Bukele's government - which has intensified its threats against the press since it declared a state of emergency to combat gangs. This situation has also generated self-censorship of news media outlets.

In Venezuela - another country that has been a major source of exiled journalists in recent years - the government of Nicolás Maduro closed 41 radio stations. He also intensified its offensive against free access to information by blocking national and international media websites. To achieve this, he ordered official and private telephone companies to take these websites off the air. This situation opened a controversy about the role of Movistar - a subsidiary of the Spanish multinational Telefónica - for complying with this type of anti-democratic actions.

The assembly called for journalists at risk to be given access to the Reporters Without Borders Spain program with the Madrid City Council, which provides them with training and support.

Another area of concern is the serious deterioration of safety for the practice of journalism due to the spread of drug trafficking and the phenomenon of its cross-cutting nature spanning several countries. In this context, reports of threats and harassment against the press were registered especially in Mexico, Colombia, Ecuador, Argentina and Paraguay.

To this we must add the stigmatization of journalism and smear campaigns by governments, their allies and political movements. The most widespread scenario for these attacks has been social networks. The most intense cases in this regard were recorded in Brazil, Costa Rica, Ecuador, Guatemala, Mexico, Peru and Nicaragua. The highly polarized environment during the presidential campaigns in Colombia and Brazil also led to this type of hostility against journalists and the media.

Incitement to hate speech in the digital ecosystem affects practically the entire region, to the point that even in Canada - one of the countries with the greatest guarantees for press freedom - journalistic organizations called on the government to act against social platforms and networks to put a stop to the circulation of violent messages against the media and its members.

Furthermore, attempts to limit freedom of expression through new laws - or bills being debated - and through governmental control mechanisms continue to be a cause for concern.

In Cuba, the recently enacted Penal Code - which increases punishments, including prison, for the crime of "contempt" in cases of offenses or criticisms against members of the government - is a cause for concern. And in Chile, there is concern over the decision of Gabriel Boric's government to create a commission to set standards on the "regulation of the media system" and to define "the right to freedom of expression and of the press." In Colombia, a bill that sets restrictions to freedom of the press in the context of an initiative to promote the plurality of community media is also a cause for concern.

On a positive note, Guatemala and the Dominican Republic have both repealed laws on cyber-crime with press gags, while Honduras repealed the Law for the Classification of Public Documents - which included obstacles to accessing public information.

The presentation of a new report of the Chapultepec Index on Freedom of Expression and Freedom of the Press confirmed the critical situation shown in each country's report. On the lowest scale - with no freedom of expression - are Cuba, Venezuela and Nicaragua. The only two countries in the range of full freedom of expression are Canada and Jamaica. In the partially restricted group are Colombia, Peru, Argentina, Honduras, Ecuador, Brazil, Bolivia, Mexico and El Salvador. Guatemala is in the highly restrictive category. The rest were classified in the low restriction block.

The complex situation for those who practice journalism, the loss of sustainability of many news enterprises due to the effects of the pandemic, the advance of large global platforms and the consolidation of autocratic political powers in several countries, limit the investigative and watchdog role of the press. In this assembly, the digital platforms were asked to remunerate the media in a fair, reasonable and equitable manner for the use of the news content they distribute and monetize. Today, all these factors constitute a mix of elements that weaken the democracies of the Americas - a region that today more than ever needs a journalism that is strengthened and protected by society. "