IAPA condemns attacks on journalists and media in Peru The Chapultepec Index exposes "a setback" this year regarding the country's freedom of expression and press freedom.

Miami (December 14, 2022) - The Inter American Press Association (IAPA) condemned attacks against journalists and media outlets in Peru that cover social demonstrations in the context of the volatile political situation in the country. The institution urged the authorities to investigate and prosecute those responsible for the violence.

On December 12, a TV Peru news crew was attacked while covering a live link in the city of Ica. Reporter Alí Ayala said that the demonstrators destroyed the video camera and recording equipment and tried to rob them. On the same day, the headquarters of América TV and Panamericana Televisión were attacked in Lima, and a vehicle of radio Exitosa was damaged, and its driver was assaulted.

The demonstrations began last December 9 in protest against the arrest of the ousted president Pedro Castillo and to demand the resignation of the new president, Dina Boluarte, to push for the closure of Congress and to order general elections and constitutional reform.

IAPA President Michael Greenspon, Global Director of Print Licensing and Innovation, The New York Times Company, United States, stated: "While our organization respects the right to protest, we condemn that journalists, who know the risks to which they are exposed, are being targeted by protesters."

According to the National Association of Journalists of Peru (ANP, in Spanish), between December 9 and 11, 21 attacks against journalists were reported in Lima, Apurímac, Huara, Puno, and Arequipa, including verbal and physical aggressions, harassment, impediments to coverage and stigmatizing speeches. Police officers allegedly assaulted two journalists, although most of the aggressions were attributed to demonstrators.

Carlos Jornet, chairman of the IAPA's Committee on Freedom of the Press and Information and editor of La Voz del Interior, Argentina, warned: "Attacks against the press divert attention from the information of public interest, which affects the right of citizens to receive news when they need it most."

The IAPA executives urged the authorities to "guarantee the right to information and the safe practice of journalism. Greenspon and Jornet highlighted that this year's Chapultepec Index showed that due to socioeconomic instability and a polarized political climate, Peru dropped from seventh place in 2021 to 11th this year, evidence of a partial restriction of freedom of expression. The Chapultepec Index is a barometer that measures institutional actions on access to information and guarantees the exercise of journalism and respect for the lives of journalists and media activity. 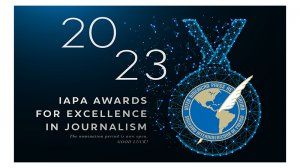