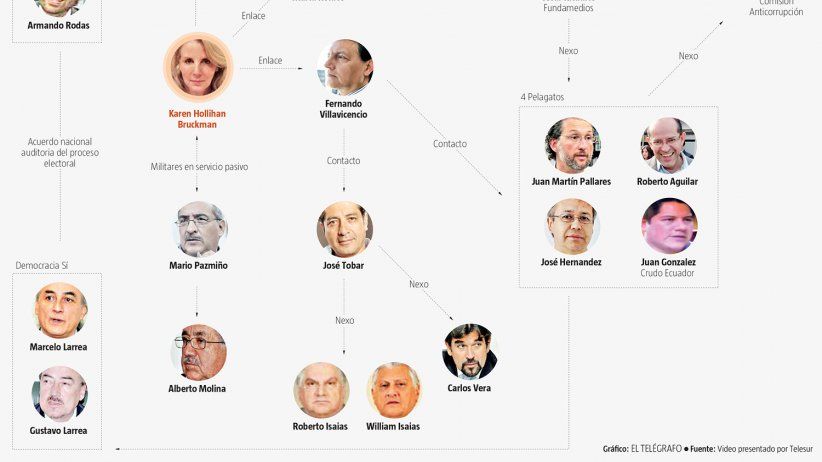 MIAMI, Florida (June 10, 2016)—The Inter American Press Association (IAPA) repudiated a new attack on the press by the government of Ecuador which, using a report by Telesur television channel broadcast on Friday, claimed media and journalist links with foreign intelligence agencies with the aim of destabilizing it.

The organization Fundamedios, whose director, César Ricuarte, was mentioned in the investigation, said that some 34 people were said to be involved in acts of conspiracy, destabilization and espionage, among them journalists Juan Carlos Calderón of the magazine Plan V; Martín Pallares, José Hernández and Roberto Aguilar; the unnamed administrator of the Web site Crudo Ecuador; Gabriel González of the site 4 Pelegatos; former opposition Congresswoman Martha Roldós of the site MilHojas, and Fernando Villacencio of the site Focus Ecuador.

Claudio Paolillo, chairman of the IAPA's Committee on Freedom of the Press and Information and editor of the Montevideo, Uruguay, weekly Búsqueda, repudiated what he called "this serious accusation that is tailor-made by the government to continue its systematic attacks on journalists, media, Web sites and all those that criticize its administration."

Telesur on June 6 broadcast what it said were the results of the first phase of a journalistic investigation which on a confusing chart showed an alleged connection between journalists of various online platforms, news media, civil, human rights and press organizations, politicians and former members of the military, among others, that were said to receive funds from the National Endowment for Democracy (NED) of the United States and to be in collusion with the CIA to destabilize Ecuador's government.

The program has been repeated in state-owned and government media (El Telégrafo, Ecuador TV, the Agencia Andes agency and El Ciudadano) and has had reactions from President Correa himself, who claimed the said meddling with the CIA was confirmed, and from other senior government officials, who issued public accusations.

IAPA Calls for Urgent Measures to Curb Violence in Mexico

IAPA calls for the return of La Prensa, one year after its usurpation, and the release of imprisoned journalists

IAPA warns of the deteriorating health of Nicaraguan journalists in prison