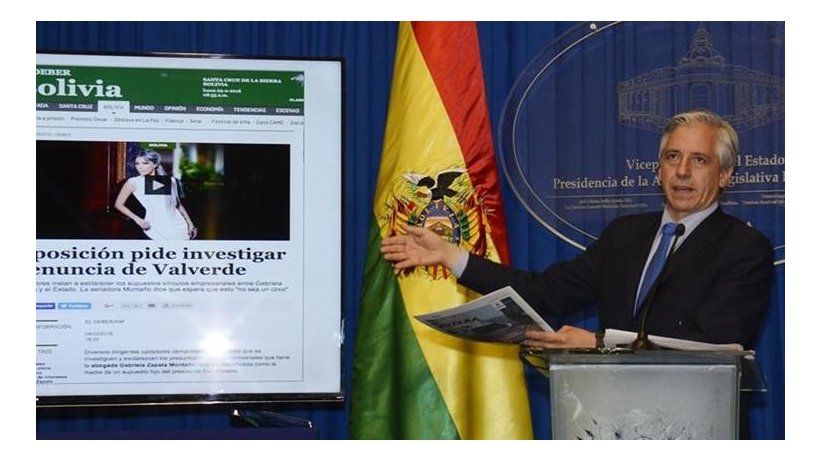 MIAMI, Florida (June 20, 2016)—The Inter American Press Association (IAPA) today expressed concern and condemned accusations made by officials of the Bolivian government against journalists and news media, which they publicly discredited and threatened to send the reporters to prison.

Bolivian Vice President Álvaro García described members of the opposition, news media and lawyers as a "media-political mafia." He accused them of heading a "conspiracy" against President Evo Morales and threatened to apply "the laws to all these liars," in a reference to journalists and media that had disseminated information about the President's former partner, businesswoman Gabriela Zapata.

García specifically mentioned the Fides News Agency (ANF) and the newspapers El Deber, Página Siete and Erbol. Presidency Minister Juan Ramón Quintana had said to the National Assembly on May 19 that these media formed part of a "lying cartel." He described journalist Carlos Valverde as a liar inked to external interests, while Amalia Pando and Andrés Gómez he accused of being associated with a destabilization plan.

The chairman of the IAPA's Committee on Freedom of the Press and Information, Claudio Paolillo, condemned what he called "the old practice of intimidating journalists and denigrating the media, with the objective of dissuading them from reporting on matters of public interest."

Paolillo, editor of the Montevideo, Uruguay, weekly Búsqueda, added, "We deeply condemn the fact that the government is always seeking to stigmatize the press, labeling it a 'cartel,' as if it were a gang of delinquents, thus justifying criminal charges which are completely out of line with what the Press Law currently in effect in the country stipulates and with the inter-American principles on press freedom."

In May Valverde left the country in under threat for having reported about the existence of an alleged son of President Morales with Zapata, as well as claimed acts of influence peddling in the award of state contracts to the Chinese company where Zapata had worked as commercial manager. Also leaving the country was the editor of the newspaper El Sol de Panda, Wilson García Mérida, after the Presidency Minister filed a lawsuit against him for sedition.