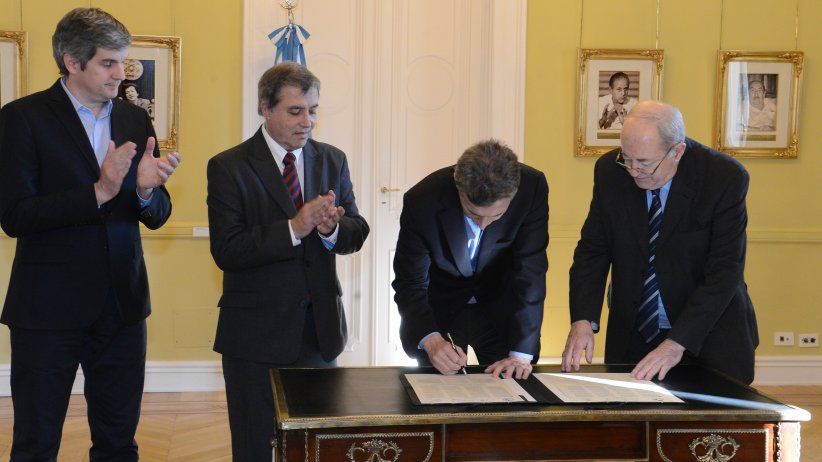 BUENOS AIRES, Argentina (August 2, 2016)—Within the framework of a ceremony held today at the Casa Rosada government palace Argentinian President Mauricio Macri endorsed the Declaration of Chapultepec and reaffirmed his commitment to respect freedom of expression and of the press.

"It is a pleasure that all this appears to be far-off history," President Macri said in reference to the lack of respect for free speech and press freedom in the previous governments that were mentioned by Claudio Paolillo, chairman of the Inter American Press Association (IAPA) Committee on Freedom of the Press and Information in his message during the official act of signing of the Declaration in which also participated representatives of Argentina's Association of News Entities (Adepa), executives of various local media and government officials.

Paolillo, who headed the IAPA delegation, said that this is a ceremony "of great real and symbolic significance" of "Argentina's return to the group of countries where a free journalism reigns, without harassment from those in power, without persecutions, without discriminations and without 'escraches' (demonstrations) aired in obligatory television broadcasts against those who think differently."

The editor of the Montevideo, Uruguay, weekly Búsqueda declared that during the last 12 years seven of the 10 principles of the Declaration of Chapultepec "were violated in Argentina by the governments or by officials or pro-government militants funded by public monies" and said that between 2003 and 2015 the IAPA sent six international missions to the South American country with the objective of establishing some kind of dialogue with the authorities, but "we never were received."

Paolillo concluded by expressing to President Macri his confidence "that this commitment that you have assumed on signing the Declaration of Chapultepec will hold well during your term of office."

The Declaration of Chapultepec contains 10 principles on freedom of expression and of the press that should reign in a democratic society.

Macri is the second Argentinian president to sign the Declaration of Chapultepec. Carlos Menem, president from 1989 to 1999, added his signature on June 6, 1994.