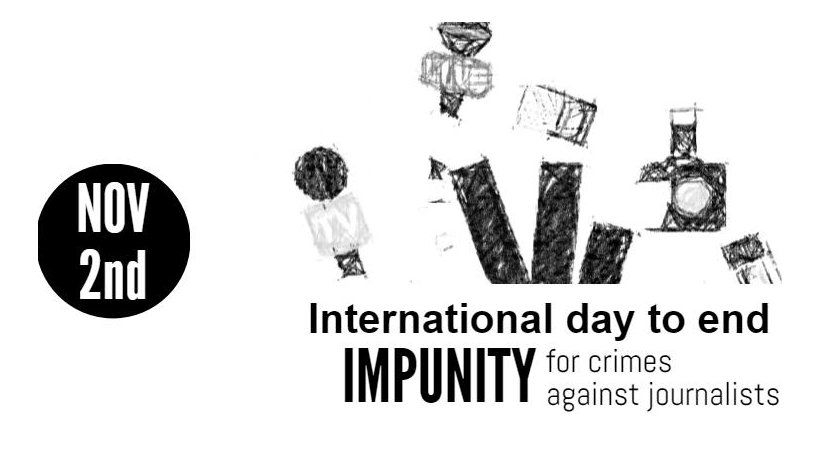 MIAMI, Florida (November 2, 2016)—Within the framework of the International Day to Put an End to Impunity in Crimes Against Journalists that is celebrated today the Inter American Press Association (IAPA) stressed that in the Americas the practice of journalism lacks effective protection in the face of situations of violence and the response of governments is limited, leaving numerous journalists with lack of defense and victims of murders, physical attacks and death threats.

Thus declared the Conclusions of the IAPA at its recently-held General Assembly in Mexico City, where recorded in an emotional video were the 20 journalists murdered in 2016 in the region, 11 of them in Mexico. Since 1996 it is an IAPA tradition to include in its meetings resolutions on the issue of impunity in the Americas. At the Mexico meeting there were approved five resolution documents (Murders, Brazil, Colombia, Mexico and Peru) with the aim of keeping present the issue of the lack of justice and to call on governments for specific actions.

For its being the country with the largest number of journalists murdered in the Americas the IAPA called on the government of Mexico to deal firmly, fully and in a coordinated manner with cases of violence against journalists and news media. Similarly it urged that country's authorities to comply with the resolutions of the Inter-American Commission on Human Rights (IACHR) regarding cases of murder submitted by the IAPA to the international organization, that there not be allowed the continued provision of a statute of limitations on crimes committed against journalists, and that there be provided to the protection system the professional and financial resources to combat the violence and ensure the safety of journalists.

In this regard the then IAPA president, Pierre Manigault addressed the president of Mexico, Enrique Peña Nieto, reminding him of the "numerous cases of murders of journalists without justice being done in your country."

Manigault, of the Charleston, South Carolina, newspaper The Post and Courier, also told Peña Nieto, who was invited to the meeting, that the state and federal authorities "neither have given an adequate response" to solve cases that the IAPA has submitted to the IACHR and continue to go unpunished.

Manigault referred to the murders of Héctor Féliz Miranda, Víctor Manuel Oropeza, Alfredo Jiménez Mota, Francisco Ortiz Franco and Benjamín Flores González, "whose names," he said, "respectfully encompass other fallen journalists in Mexico and in other countries of the region."

In its resolutions the IAPA asked the Brazilian authorities to identify and punish the perpetrators of threats, aggressions and attacks, that news companies provide protective gear and the government the resources and structure necessary for the functioning of the Program of Protection of Witnesses and Protection of Human Rights Defenders, that urgent attention be given to cases pending resolution before the IACHR, and the participation of experts to shed light on and punish those responsible for the murder of journalists, including the oldest cases, so as to prevent impunity.

It also urged the Colombian Attorney General's Office and judicial authorities to strengthen investigation mechanisms in order to lead with the solving of threats to and murders of journalists and impose punishments that contribute to lessening impunity, and it was repeated to the Attorney General that there needs to be progress in prioritizing emblematic cases, among them the investigation into the 1986 murder of Guillermo Cano Isaza.

In Peru the Judicial Branch was asked to act with due diligence and speed to punish those responsible for the murder of journalist Hugo Bustíos in 1988, regarded as the country's most emblematic case of impunity.