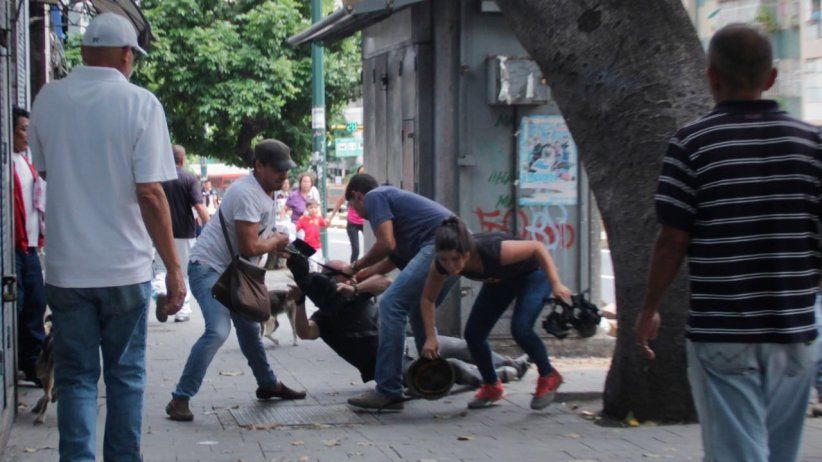 For information on how journalists should protect themselves, see CPJ's Safety Advisory for Venezuela.

Venezuelan opposition supporters have been protesting against the government of President Nicolás Maduro since late March, when the country's Supreme Court ruled in favor of stripping the opposition-led National Assembly of its lawmaking powers. This wave of anti-government demonstrations, the longest since 2014, has become violent in many parts of the country. As of June 13, the attorney general's office had recorded 67 people killed in the protests, while the news website Runrun.es had documented a total of 86 deaths.

There are two main parties involved in the current unrest. One is the governing Socialist Party (PSUV) led by President Maduro, who has attempted to continue the populist Bolivarian Revolution movement of his predecessor Hugo Chávez. The other is the Democratic Unity Roundtable (MUD), a coalition of opposition political parties. Though Venezuela's political opposition has historically been fractured, the March Supreme Court ruling inspired disparate factions of MUD to work together in collective opposition to Maduro. MUD has several leaders, including Henrique Capriles, the governor of the northern state of Miranda and a candidate for president; Leopoldo López, a jailed politician; and National Assembly President Julio Borges.

Despite continued opposition, Maduro's government is moving forward with a plan to convene a constituent assembly to rewrite the constitution. Opposition leaders have called this plan a power grab and an attempt to interfere with local and national elections that had previously been scheduled for 2017 and 2018, respectively, according to news reports. It is now unclear when these elections will take place.

The Protests
Early demonstrations were organized by MUD and affiliated activists. But as the protests have continued, more recent actions have been sponsored by an increasingly diverse range of organizers, including student groups, teachers and other civilian groups.

Marches normally begin at a predetermined meeting point where protesters gather for two or three hours. They then move toward city centers where government ministry offices are located.

In Caracas, the capital, protests have many different route options. Security forces typically stop them after only a short distance, and the national government has announced that protests will not be allowed to enter the Municipio Libertador, the city center. Police and National Guard place barriers, armored vehicles equipped to fire tear-gas canisters, lines of police and soldiers, and vehicles equipped with water cannons.

Around the country, Venezuelan state security forces, including the Bolivarian National Guard (GNB), national police (PNB), and state police, have used tear gas and rubber-coated bullets to disperse crowds. Hundreds have been injured and arrested.

Meanwhile, customs officials have banned the import of protective items used by both journalists and protesters, including helmets, gas masks, and bulletproof vests, according to news reports. The same ban has also blocked imports of first aid supplies and goods used by protesters to protect themselves, such as antacids, eye drops, and stretchers.

Throughout Venezuela's largest cities, belligerent groups from both sides are also present at demonstrations or hotspots. Many are armed with weapons of different types, and all pose a potential threat to journalists. They include pro-government armed groups known as colectivos, which operate sometimes in support of security forces and sometimes alone, and protester barricades, known as guarimbas, which most often appear along main roads and in opposition-friendly neighborhoods.

Colectivos maintain a significant presence at demonstration sites. They primarily consist of former police officers, military, or security service personnel. Members are usually dressed as civilians, though some wear black jackets and masks. They typically carry small arms, though some have also been seen with rifles or machine guns. Colectivo members usually travel in groups of two aboard motorcycles.

Colectivo members have fired directly into protests and are allegedly responsible for a number of protester deaths, according to reports. They have also threatened, physically attacked, and robbed journalists.

Guarimbas, or protest barricades, which first appeared during the 2014 protests, are commonly manned by university or high school students, known as guarimberos. The barricades are made of up materials ranging from bags of trash to tree trunks and stolen vehicles, such as trucks or buses, which guarimberos sometimes set on fire. Local reports indicate that some guarimbas in Caracas have included gangs who have extorted drivers and forcefully collected money from passersby. There are also reports of these groups using violence.

The following locations are the sites of most, though not all, of the documented protests and violent incidents. Journalists should take additional precautions when reporting there:

The Climate for Journalists
Journalists covering the protests have been attacked and harassed by all actors involved, though colectivos and Venezuelan state security forces are responsible for the majority of incidents, according to local press freedom organizations.

National Guard and police have detained journalists covering protests, sometimes for as little as 15 minutes, and sometimes overnight in police or intelligence facilities. In one instance, on May 1, members of a reporting team for the online platform VivoPlay were detained in Caracas. The two VivoPlay reporters were released after several hours, but their drivers remained in detention until June 2, according to media reports. In April, two journalists with French photo agency CAPA were removed from their flight back to France and held for nine days without charge. Venezuelan officials have previously deported international reporters or blocked them from entering the country.

Security forces and colectivos have threatened and blocked journalists from covering certain locations, confiscated equipment, photographed identification, and detained reporters for multiple hours. Several videos posted by news outlets have documented National Guard officers rolling tear gas canisters in the direction of journalists. One video from VivoPlay shows a GNB official telling journalists to move away, "or we'll treat you like the guarimberos." Journalists should avoid colectivos as much as possible, and relocate to a safe location if they encounter them.

Dozens of journalists across the country have reported their mobile phones have been stolen by GNB or police as well as colectivos and civilian gangs. Journalists working in Caracas told CPJ that the theft of phones is so systematic and widespread that it appears to be part of a deliberate strategy to prevent reporters from covering protests. These tactics are especially damaging to freelancers and journalists working for smaller publications outside of Caracas, who have limited resources and rely on their phones as a vital reporting tool.

In addition to direct physical threat against journalists, the government has censored news outlets. Venezuela's state telecommunications regulator ordered two international news channels off the air on April 19, according to the broadcasters, and other outlets have reported service interruptions.

Meanwhile, protesters have also targeted journalists, robbing them, attacking them, and accusing them of being government sympathizers. Though there are no reports of guarimberos directly targeting reporters, journalists should use caution when dealing with them.

A few government officials, including Venezuelan Attorney General Luisa Ortega Díaz, have issued statements calling for journalists' right to cover the protests safely to be respected.

CPJ is aware of the following recent attacks on journalists covering protests in Venezuela:

What to Expect Next

Opposition strategy is evolving. Large protests continue, but they are drawing less attention from international press, and are taking an increasing toll on protesters. There does not yet appear to be a consensus on the next steps, though organizers have discussed using other tactics, including sit-ins on strategic roads, higher numbers of smaller marches along different routes, and a national strike, according to local sources and reports.

The opposition has said that June is critical and they plan to expand protests, according to local sources. Though President Maduro had said he expected the protests to have ended by June 8, that day saw marches across the country, mass arrests and increased violence, including the death of a 17-year-old protester in Caracas.

The following protests are planned in coming days:

Medical Facilities in Case of Emergency

In Caracas, most of the people injured during protests are treated by volunteer field medics (including the Red Cross, Blue Cross and the newly formed Green Cross, which is staffed by medical students). Next, victims are often transferred to medical facilities such as Salud Chacao, or, in the case of serious injuries, to private facilities which have modern equipment and good qualified staff.

CPJ does not recommend that victims go to public hospitals. These hospitals have excellent staff and significant experience with trauma injuries, but currently have very limited equipment and supplies. Patients may have to supply their own bandages, sutures, or even blood.

Below is a list of medical facilities in different locations: