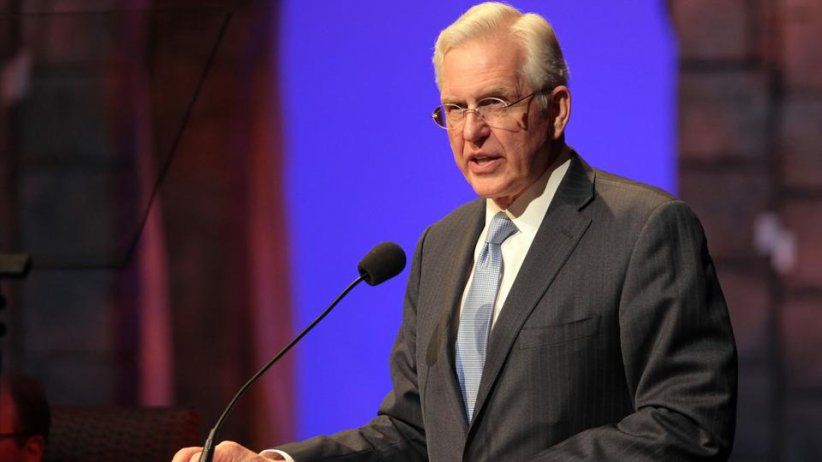 Elder D. Todd Christofferson, member of the Quorum of the Twelve Apostles of The Church of Jesus Christ of Latter-day Saints. (Photo and video from mormonnewsroom.org)

The Host Committee of the 73rd General Assembly in Salt Lake City organized an outstanding presentation on "Faith, Family and Liberty" by the member of the Quorum of the Twelve Apostles of The Church of Jesus Christ of Latter-day Saints, Elder D Todd Christofferson.

Christofferson, who is a lawyer and has been a general authority of the church since 1993, said: "The right to speak about God, for example, also embraces and protects the freedom to speak about personal opinions and beliefs in matters of politics, art, literature, history, morality or practically any other topic, freedom of expression and freedom of conscience are mutually supportive ".

The activity that included a dinner was held on Saturday, October 28 at the LDS Conference Center.

Next, the full text of your conversation with the assembly attendees. (See here the video.)

Elder D. Todd Christofferson of the Quorum of the Twelve Apostles

On behalf of The Church of Jesus Christ of Latter-day Saints, I warmly welcome you to Salt Lake City and the Inter-American Press Association's 73rd General Assembly. It is a special honor to have with us this evening the Secretary General of the OAS, Luis Almagro Lemes, and it is a special honor for me to address such a distinguished audience. We applaud the efforts of IAPA to defend and promote freedom of press and expression throughout the Americas. So many of the blessings of life and the prosperity of society rest on these freedoms.

Speaking personally, there is a special place in my heart for the people of Mexico and Central and South America. I first learned Spanish as a 19-year-old missionary in Argentina. And years later, my wife and children and I had the opportunity to live in Mexico City to direct Church operations in Mexico. Sharing Jesus's message of hope and goodness with the Latino people has been one of the great joys of my life.

My enthusiasm is shared by many of my fellow Latter-day Saints who have likewise spent time as missionaries in Latin America and among Hispanic peoples living in North America. As you walk the streets of Salt Lake City and interact with our businessmen and women, civic leaders, religious leaders, students, families, and regular citizens, you will find people who have lived in Latin America and who are now goodwill ambassadors for your countries. In fact, the current IAPA president, Matthew Sanders' love for the region and its people grew from his missionary service in Quito, Ecuador, from 1989 to 1991.

In the next few minutes, I would like to discuss some principles that are important to you and to us. In fact, I like to think they're universal principles that reflect the yearning in every human heart. But such principles, no matter how firmly embedded they are in human nature, still require our vigilance in preserving them in law and culture. So, in this great endeavor of securing the broad freedoms of the soul, let us all work together—media, religion, education, business—to lift our communities and instill values for our mutual flourishing.

The United Nations' Universal Declaration of Human Rights is a powerful statement that asserts some of our highest aspirations as human beings. It proclaims common standards of freedom and decency that have stood the test of time. It declares, "Everyone has the right to freedom of thought, conscience, and religion" and "Everyone has the right to freedom of opinion and expression; this right includes freedom to hold opinions without interference and to seek, receive, and impart information and ideas through any media and regardless of frontiers."[1]

The Declaration of Chapultepec, adopted in 1994 and reaffirmed by freedom-friendly, national leaders across the Americas, reminds us of the crucial role of media. Its preamble states, "Wherever the media can function unhindered and determine their own direction and manner of serving the public, there is a blossoming of the ability to seek information, to disseminate it without restraints, to question it without fear and to promote the free exchange of ideas and opinions. But wherever freedom of the press is curtailed, for whatever reasons, the other freedoms vanish."[2] Such declarations provide a common framework by which we can construct fair and open societies.

All societies need fresh ideas and new perspectives to address the conditions of the moment. Writers and journalists play a key role in this discovery. Freedom of speech for everyone is important because wisdom often comes from the unlikeliest of places and the simplest of people. Thoughts that may be forbidden one day may turn out to be useful the next. Safety does not come from stifling speech but from giving it a chance to breathe. Not everything that comes from our pens or our mouths will be useful, but when freedom is discouraged, nothing good will come out of them either. To get the sublime, sometimes we have to put up with a little of the ridiculous.

A prominent U.S. judge once described this process as the self-righting of truth: "The best test of truth is the power of the thought to get itself accepted in the competition of the market."[3]The concept of a free marketplace of ideas requires that all people, minorities as well as majorities, have access to the media.

Your privilege and calling as a journalist is to facilitate discussion and debate between people who have different beliefs, races, nationalities, and political opinions. An informed citizenry, it is often said, is the bulwark of democracy. The basic principles of journalistic integrity—objectivity in reporting, detachment from personal bias, and disinterested duty to the truth—are essential in facilitating public trust and civil discourse. All individuals and institutions, including churches, share an interest in contributing to these worthy goals.[4]

Civic discourse—discussing questions of fairness, peace, liberty, and the general welfare—must work out the inevitable knots. Common places where this happens include the media, classrooms, town halls, legislatures, and the dinner table. These discussions often acquire religious dimensions. At their best, voices of faith elevate public discussions beyond the here and now. For instance, Martin Luther King Jr. powered a movement for racial and civil justice through his depth and eloquence as a pastor. William Wilberforce applied Christian ethics to abolish the slave trade in Great Britain. Abraham Lincoln drew on the truths of the Bible to heal a divided nation. Mahatma Gandhi spread the religious principles of nonviolence to lead India to independence.[5] And because religion occupies such a large space in the spectrum of human life, the range of solutions would be smaller without the voice of religious conscience.[6]

In the end, our conscience is all we have. Everything else—material possessions, social status, wealth—can be taken away. But the beliefs and values that constitute our moral compass, the invisible space in our hearts that separates right from wrong, the meaning we attach to life, and the internal goad that compels us to share our vision are the things that give us dignity and purpose. The ability to voice this conscience is our birthright as human beings. Without it, our other freedoms have little meaning.[7]

As I mentioned in another address recently in India, religious freedom is not merely a token legal gesture of equality in name only. It is a substantive freedom to believe and act according to one's sincerely held beliefs. Wherever we look in the world, we see that religious freedom not only protects religious people and institutions. It also acts as a catalyst in protecting the whole range of human rights. The right to speak about God, for example, also embraces and protects the freedom to speak about one's opinions and beliefs in matters of politics, art, literature, history, morality, or virtually any other topic.[8] Freedom of expression and freedom of conscience become mutually supportive.

Some two years ago, it was my privilege to speak in praise of religious liberty and the rights of conscience at the oldest mosque in Latin America, in São Paulo, Brazil. I was addressing Muslims, Catholics, Evangelicals, Sikhs, Jews, and native African religionists, among others. It was a first-of-its-kind Brazilian event celebrating the nation's strong commitment to religious freedom, and to say it was an unusual gathering would be an understatement. Media reporting on this event was insightful. It noted the camaraderie among religious leaders who, despite widely differing beliefs, displayed an obvious feeling of unity among themselves. That unity was centered on two things: (1) the need to preserve the opportunity for all freely to exercise their faith and honor their conscience, and (2) the shared responsibility to serve and enhance the well-being of all people regardless of religion or belief. The press was doing what it can do best—using its freedom to promote other freedoms.

We honor your efforts to give voice to the voiceless, to shine light on the difficulties of our world, and to bestow dignity on the human experience. May God bless you and protect you as you go forward as ambassadors of freedom and human rights. Thank you.