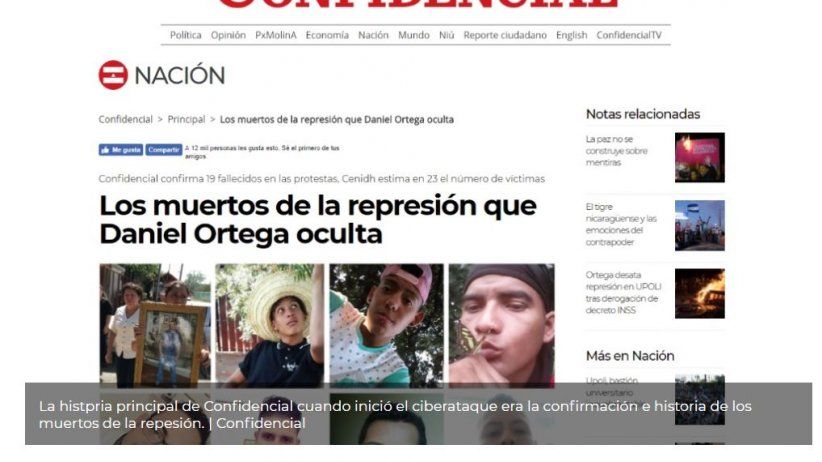 When the cyber attack began, the magazine Confidencial was reporting about the deaths toll during the protests. (Capture)

The websites of La Prensa and Confidencial on Monday, April 23 suffered attacks of Denial of Distribution of Service (DDoS).

It urges media to adopt technological protection and prevention measures

MIAMI, Florida (April 25, 2018)—The Inter American Press Association (IAPA) today condemned recent cyber attacks on the websites of the newspaper La Prensa and the magazine Confidencial of Nicaragua and urged that there be an urgent investigation into acts of censorship made against other media, as well as the murder of journalist Ángel Gahona.

The websites of La Prensa and Confidencial on Monday, April 23 suffered attacks of Denial of Distribution of Service (DDoS), regarded as one of the most harmful forms of online censorship. The attack disabled the Internet connection service of Confidencial for seven hours, while in the case of La Prensa its computer technology experts detected it on time and prevented the collapse of the website.

The IAPA for the past two years has been promoting among Latin American news media the Project Shield against DDoS attacks, in conjunction with Google's Jigsaw division. This kind of attack is an increasingly frequent one on the part of enemies of freedom of expression and of the press. The attack is carried out through the manipulation of hundreds of thousands of false users who block entry into the site by legitimate users.

IAPA President Gustavo Mohme deplored what he called "another act of censorship and repression made against those who dissent and express their point of view through various forms of expression, whether through digital platforms, traditional media or public demonstrations." He added that "this case it is not only an attack on media but an assault upon press freedom in Nicaragua."

Mohme, editor of the Peruvian newspaper La República, urged his colleagues in the region's media to use the Project Shield, a free Jigsaw service that employs Google's technology and infrastructure to protect news websites. To request that protection now click here.

Roberto Rock, chairman of the IAPA's Committee on Freedom of the Press and Information, declared, "This new aggression, which apparently comes from sectors intolerant of independent criticism of the government's discourse, confirms the proliferation of authoritarianism and restrictions of freedom of expression by those in power that we have denounced."

On April 21 there was fatally shot Ángel Gahona as he was broadcasting on Facebook Live from the town of Bluefields in Nicaragua's South Caribbean Coast Region about protests unleashed following the governmental reform of the security system that had left some 30 people dead. Last week there were censored and taken off the air television stations 100% Noticias, Canal 12, Canal 23 and Canal 51 and in the city of León, 56 miles northwest of the capital, Radio Darío radio station was set on fire. More than a dozen journalists have reported attacks or destruction of their work equipment.

Rock, editor of the Mexican portal La Silla Rota, stressed the relevance of the mentioned project and said that in the IAPA's most recent half-yearly meeting in Medellín, Colombia, earlier this month there was noted with alarm a recurrence of attacks upon journalists and media in the region through digital platforms and social media in Argentina, Brazil, Colombia, Cuba, El Salvador, Ecuador, Guatemala, Honduras, United States and Venezuela, in addition to Nicaragua.