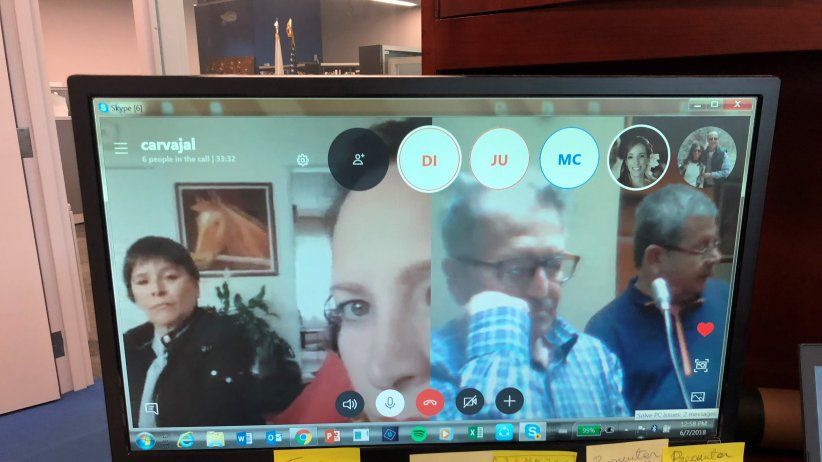 Relatives of Nelson Carvajal react to the ruling of the Inter-American Court of Human Rights.

The Inter-American Court of Human Rights held the State of Colombia accountable for the impunity of a crime against a journalist.

The Inter-American Court of Human Rights held the State of Colombia accountable for the impunity of a crime against a journalist.

[Miami / Washington DC, June 7, 2018] The Inter-American Press Association (IAPA) and Robert F. Kennedy Human Rights celebrate a judgment issued yesterday by the Inter-American Court of Human Rights (IACourt), which held the State of Colombia responsible for failing to provide justice in the case of journalist Nelson Carvajal, who was murdered in 1998.

In the judgment, the Inter-American Court highlighted the negative impact that the combination of violence and impunity has on both journalists and their families, as well as on society at large and how this has resulted in the fact "that diverse communities in Colombia do not receive information on issues that affect them, such as the armed conflict, organized crime, drug trafficking and political corruption."

"This decision is a historic milestone in the fight against impunity and in favor of freedom of expression in the Americas. Justice has been achieved by Nelson and his relatives, who had to endure the suffering and anguish for a mourning that included the forced exile of many of them" expressed Gustavo Mohme, IAPA's president and the director of Peruvian newspaper La República. "Our work that led to this sentence could not have been carried out without valuable support and legal and judicial support from the Robert F. Kennedy Human Rights," Mohme added.

"We hope that this decision opens a new chapter in the countries of the region on how to ensure effective and timely justice that serves as a mechanism to protect journalism and, as a result, the right of the whole society to be informed," said Kerry Kennedy, President of Robert F. Kennedy Human Rights.

According to Kennedy and Mohme, "this is a key decision for the fight against impunity for crimes against journalists not only in Colombia but throughout the region, because it clearly exposes the direct relation that violence has on freedom of the press when adequate protection measures are not in place, and when the State does not investigate and punish those responsible."

Nelson Carvajal Carvajal was murdered on April 16, 1998 in Pitalito (Huila), Colombia, where in addition to being a teacher and director of a school, he worked as a radio journalist on the Radio Sur Broadcaster, affiliated with the national network RCN. Carvajal was recognized in his community for investigating and reporting acts of corruption in public administration and money laundering undertaken by influential people in the municipality of Pitalito.

The IACourt also concluded that the Colombian government failed in its duty to prosecute those responsible for Carvajal's murder, guarantee his right to freedom of expression and protect Carvajal's relatives, who suffered threats and harassment throughout their relentless 20 years long search for truth and justice. As a result of the State's international responsibility in this case, the IACourt ordered it to adopt a series of reparation measures, including non-repetition measures to prevent similar incidents to happen again.

The serious irregularities in the murder investigation, as well as the threats suffered by Carvajal's relatives, led to the case being brought before the Inter-American Commission on Human Rights in 2002. In 2015 Robert F. Kennedy Human Rights joined the legal representation of the victims, and its work was determinant in the litigation that culminated with a public hearing before the IACourt in San Jose, Costa Rica, on August 22 and 23, 2017.

"This decision sets a precedent and provides tools to continue fighting for freedom of expression, the same way that motivated us the 1985 Advisory Opinion from this Court as a result of IAPA's initiative," concluded Mohme.

Reactions from Judith and miriam, sisters of Nelson Carvajal

"It is an impressive decision because it recognizes the journalistic work that my brother did. It honors his memory and with it the voice of the press so that it is not silenced. Nelson's effort and love for journalism has been forever reflected in this judgment", said Judith Carvajal, from her exile.

Miriam Carvajal, from Bogotá, emphasized that "this ruling is the international recognition of my family's efforts to seek justice and the persevering work of the SIP and Robert F. Kennedy Human Rights in the fight against impunity. It is not just a triumph for the family and organizations, but also for journalism."

IAPA is a non-profit organization dedicated to the defense and promotion of freedom of the press and of expression in the Americas. It is composed of more than 1,300 publications from the Western Hemisphere; and is headquartered in Miami, Florida, United States.