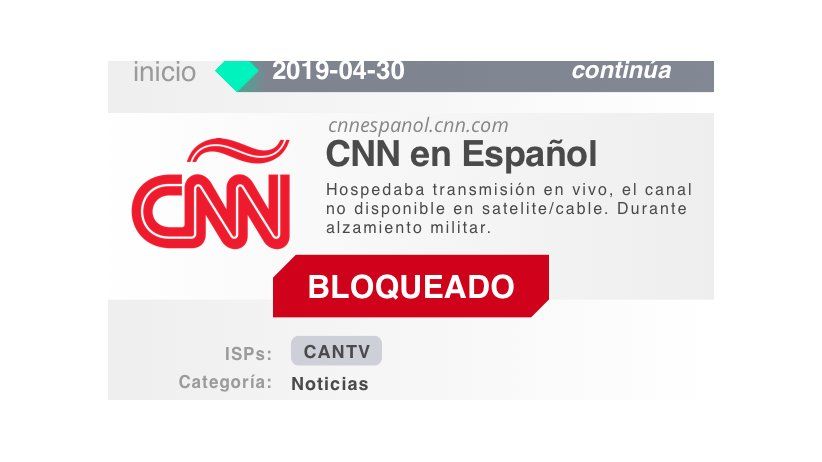 It calls for respect for the country's citizens' right to be informed.

MIAMI, Florida (May 1, 2019)—The Inter American Press Association (IAPA) today condemned the censorship of news imposed in Venezuela by the Nicolás Maduro regime that restricted Internet, digital media, radio and television services, in reaction to protest mobilizations against its government organized by the country's interim president, Juan Guaidó, and opposition leader Leopoldo López.

IAPA President María Elvira Domínguez, editor of the Cali, Colombia, newspaper El País, called for a guarantee of and respect for the right of Venezuelans to be informed, and at the same time she deplored "the acts of censorship and repression of journalists, digital platforms, traditional media and other forms of communication which, despite facing numerous risks, maintain the responsibility of continuing to be informed."

Roberto Rock, chairman of the IAPA's Committee on Freedom of the Press and Information, said, "This is an attack upon press freedom and the right of Venezuelans to express themselves and freely demonstrate without fear of suffering reprisals."

Rock, editor of the online news portal La Silla Rota, held the Maduro regime responsible for the consequences of the attacks "on journalists, media and citizens exercising their right to demonstrate."

According to the Venezuela Press and Society Institute (Ipys Venezuela) on April 30 there were recorded 19 cases of violations of freedom of expression and digital rights in the South American country. Cantv, Movistar and Digitel users had difficulty in accessing Twitter, Instagram, Facebook, Periscope, YouTube and Google.

In addition, there occurred 11 arrests, robberies and attacks upon journalists coming from armed groups and state security bodies. The National Telecommunications Commission (Conatel) censored the signal of channels CNN Internacional and BBC Mundo. Both CNN en Español and NTN24 of Colombia remained censored on television channels.

Conatel in addition ordered the suspension of broadcasts by Radio Caracas Radio (RCR) and confiscated its equipment, for alleged expiration of its license. RCR, Venezuela's oldest radio station, used to be part of Radio Caracas Televisión (RCTV), shut down by then President Hugo Chávez on May 27, 2007.

NetBlocks, a non-governmental organization dedicated to matters of cyber security, also denounced interruptions in the apps Whatsapp and Telegram, operated by the state-run Cantv and its wideband service ABA.