Conclusions of the IAPA 75 General Assembly 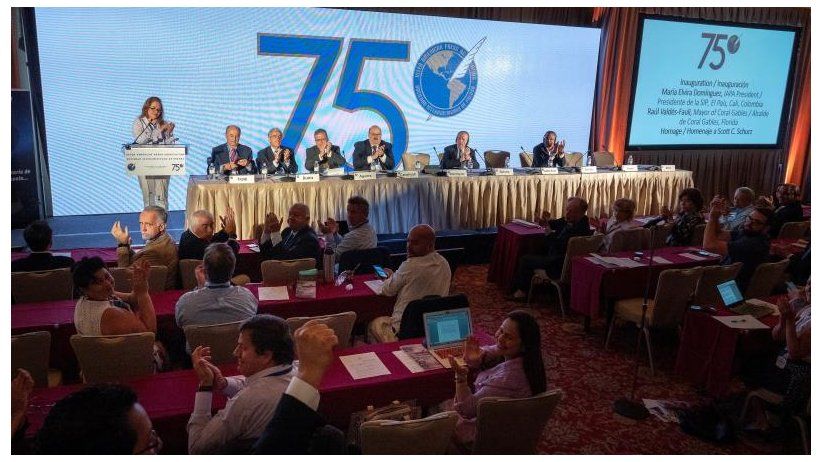 Downloads
0
0
Tweet
$.-
Miami (October 7, 2019) - A "particularly bad" semester for the press for the murder of 13 journalists, as well as outrage over physical aggressions and restrictions on freedom of expression and human rights in Nicaragua, Venezuela, Mexico and Cuba, are the main points of the Conclusions of the 75th General Assembly of the Inter-American Press Association (SIP) held from October 4 to 7 at Coral Gables, in the US state of Florida.

The text of the Conclusions approved by the general assembly of the organization is as follows:

In the context of the 75th anniversary of the IAPA - both yesterday and today - press freedom continues to be under threat in several countries of the American continent and requires permanent monitoring.

Thirteen journalists have been murdered since April: seven in Mexico, two in Brazil, two in Colombia, one in Haiti and one in Honduras. A particularly disastrous semester - showing a rise in the level of aggressions and threats.

Cuba, Mexico, Nicaragua and Venezuela have registered the greatest aggressions and violations against freedom of the press and expression. Physical attacks against journalists in the exercise of their profession - including confiscation of equipment and press material, and unjustified arrests - are increasingly common.

In Cuba, sentencing and imprisonment for journalists is once again a reality. Journalist Roberto de Jesús Quiñones Haces of the Cubanet portal has been sentenced to a year in prison. More than 20 websites and portals have been blocked. And the government has denied 20 independent journalists permission to travel outside the country.

The report on Nicaragua generated general outrage; media confiscated, journalists persecuted and others threatened, in addition to the blockade of newspaper supplies at Customs. But there was good news as well. Within hours of the arrival of the IAPA mission led by President María Elvira Domínguez, the government released Lucia Pineda and Hugo Mora - after spending six months in prison. "The union of all the media has shown that together, we can make a difference," said President Dominguez.

In El Salvador, Brazil, Guatemala, Mexico, Nicaragua and the United States, the stigmatization of the media and journalists is on the rise. The discrediting originates with the Heads of State themselves, and is spread through social networks.

Unfortunate news from the south of the American continent. In Argentina, journalist Daniel Santoro has been prosecuted for the so-called "case of notebooks." Several organizations have expressed their concern about a judicial decision that criminalizes the practice of journalism and ignores the established principle of protecting the sources.

In the areas of law and justice, restrictions on the practice of journalism continue. The use of criminal regulations and the filing of million-dollar lawsuits against the media and journalists have occurred in Colombia, El Salvador, Panama and Peru.

In Venezuela, press freedom continues to decline. The disappearance of journalists, others unjustly convicted by Military Courts, as well as the threats and aggressions have created an environment of extreme insecurity for the practice of the profession. Added to this is the systematic blockage of websites and portals.

During the period covered by this report, two IAPA missions were carried out with good results in Mexico and Nicaragua. In Veracruz, Mexico, the IAPA requested the governor to follow up on stalled investigations into the murders of journalists. The same was done at the level of the federal government.

On the positive side, on September 30 the Colombian State accepted public responsibility for the lack of results in the case of journalist Gerardo Bedoya - thus marking a friendly compromise after many years of efforts by the IAPA before the Inter-American Commission on Human Rights. Something similar occurred in March in the case of Colombian journalist Nelson Carvajal, murdered in Neiva in 1998 - his case was declared a crime against humanity.

In the context of the 25th anniversary of the Chapultepec Declaration, discussions continued on the pertinence of creating an Index with its methodology to monitor compliance with the principles of this Declaration in the Americas - in collaboration with the Andrés Bello Catholic University of Venezuela. Emphasis was placed on the importance of having a tool to monitor the state of press freedom.