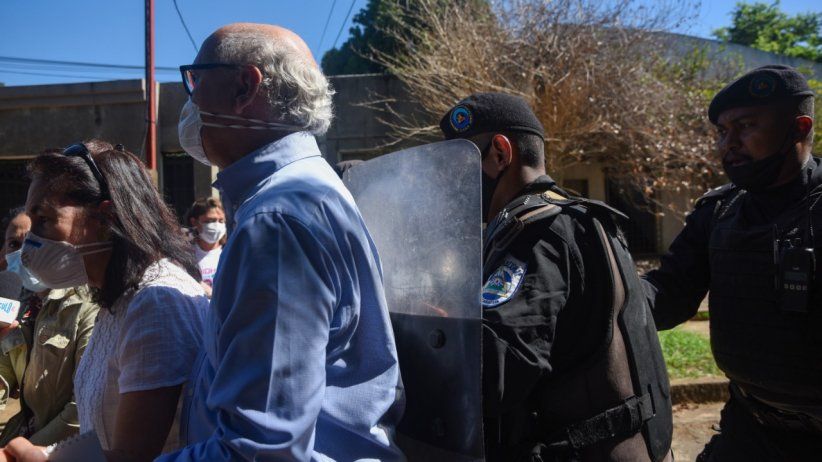 Repression and harassment of the government, which continues to ignore international calls to respect human rights and democratic principles in the country

Miami (December 17, 2020) .- The Inter American Press Association (IAPA) demanded that the Nicaraguan government return the headquarters of Confidencial and 100% Noticias media, illegally confiscated two years ago, as well as the end of the repression against independent journalists.

The hemispheric organization condemned the attack against Carlos Fernando Chamorro, director of the Confidencial, and other journalists from the same news portal and their families, as well as the president of the Nicaraguan Center for Human Rights, Vilma Núñez. They were pushed out by anti-riot agents during a press conference this week in front of the building that houses Confidencial, occupied by the government since December 14, 2018.

The president of the IAPA, Jorge Canahuati, of Grupo Opsa, San Pedro Sula, Honduras, condemned "the repression and harassment of the government, which continues to ignore international calls to respect human rights and democratic principles in the country."

The president of the Committee on Freedom of the Press and Information, Carlos Jornet, of the newspaper La Voz del Interior, Córdoba, Argentina, reiterated that, "it is evident that Nicaragua is experiencing a situation of permanent state of siege in which are prohibited protests and press conferences, such as the one called by Chamorro and Confidencial colleagues."

Canahuati and Jornet lamented the weakening of freedom of expression and of the press in Nicaragua. They reaffirmed the IAPA's demand that the government return the equipment and facilities to the media and allow them to broadcast. The IAPA has been reiterating this request since April 2018 through reports, resolutions and two international missions sent to the Central American country in 2018 and 2019. In this link you can find the resolution on Nicaragua from last October.

The headquarters of Confidencial, from where the television shows Esta Semana and Esta Noche were also broadcast, was attacked and looted on December 14, 2018. The facilities of the 100% Noticias television channel were seized on December 21 of that year. The media's director, journalist Miguel Mora, and news director Lucía Pineda, were imprisoned for almost six months. They were released on June 11, 2019, but their facilities were not returned.