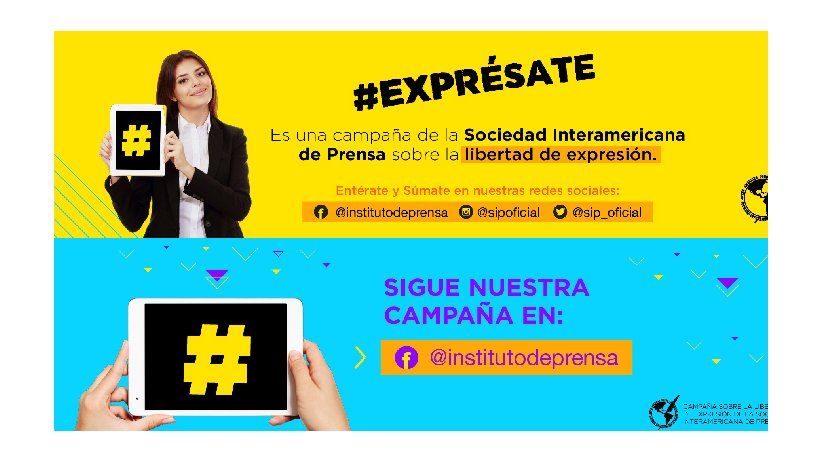 Under the label #exprésate the IAPA seeks to create awareness about the rights and duties that users, media, journalists, digital platforms and governments have in the digital era.

MIAMI, Florida (July 24, 2019) - The president of the Inter American Press Association (IAPA), María Elvira Domínguez, announced today that the organization is launching a campaign of public education to promote freedom of expression in the digital era.

Echoing the Salta Declaration, Domínguez declared that "while the digital ecosystem elaborates a more open, diverse and plural exercise of freedoms and users feel empowered to create, disseminate and share information, there exist new risks and threats coming from government and private players."

Under the label #exprésate the IAPA seeks to create awareness about the rights and duties that users, media, journalists, digital platforms and governments have in the digital era, principles that the organization set out in detail in the Salta Declaration approved at its 2018 general assembly, held in the city of that name in Argentina.

Domínguez, editor of the Cali, Colombia, newspaper El País, explained that with this campaign the IAPA is seeking to put in practice the principle of the Declaration that there should be adopted policies of news and digital literacy.

The IAPA campaign, currently only in Spanish, will last nine months and is being organized by the DSGN agency. On the page sipexpresate.com media can download banners to join in the campaign. The first stage will be of voluntary dissemination of the Declaration's principles through members of the organization and on social media. Subsequently the campaign will offer a contest for the users to generate audiovisual contents on freedom of expression.

Added to this campaign is a new IAPA podcast on "Achievements and challenges of the Salta Declaration", produced by Martha Ramos, chair of the IAPA's Internet Committee and digital director of the Organización Editorial Mexicana organization.

The Salta Declaration consists of 13 principles that call for the protection of the free flow of information no matter from what platform it is disseminated. It expresses concern at excessive regulation, the malicious dissemination of false information and cyberattacks of different origins. Among other precepts it asks governments not to penalize criticism, establish that the blockage and filtering of content constitutes prior censorship, that massive vigilance is not acceptable and that there should be respected the right to anonymity.