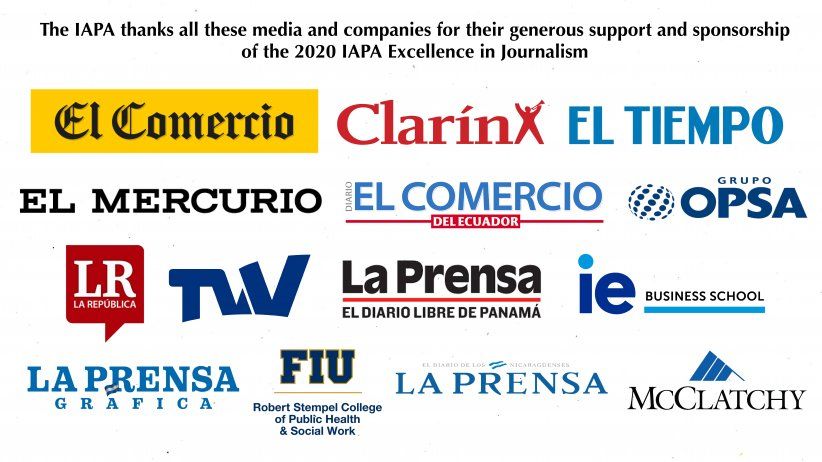 In each edition of the contest, more than a thousand works were received from large, medium and small media.

Miami (August 7, 2020). The Inter American Press Association awards the 2020 IAPA Excellence in Journalism in 14 categories to communication professionals from Argentina, Brazil, Chile, Colombia, Ecuador, El Salvador, the United States, Mexico, Nicaragua, Panama, Peru and Venezuela; highlighting the quality of the content that has served to promote the "improvement of our societies".

The president of the IAPA Awards Commission, Leonor Mulero, indicated, "The press of the Americas continues to do its best, leading the denunciation of social ills, reflecting our daily tragedies and highlighting progress in improving our societies".

Mulero, from the Ferré Rangel Media Group, San Juan, Puerto Rico, was proud that in each edition of the contest, more than a thousand works were received from large, medium and small media that "were of excellent quality with each having a strong impact on the life of their communities."

The awards, which consist of diplomas along with $2,000 cash, will be presented to awardees in a special ceremony during the IAPA General Assembly to be held virtually from October 19 to 23.

In separate communication today, the organization also reported that it has granted its 2020 Press Freedom Grand Prize to journalists and press workers killed by COVID-19 in the line of duty.

See here the complete list of the first prize winners and honorable mentions in the 15 categories of the 2020 IAPA Excellence in Journalism competition, which includes the IAPA Grand Prize for Press Freedom.

The IAPA is a non-profit entity dedicated to the defense and promotion of freedom of the press and of expression in the Americas. It is made up of more than 1,300 publications from the western hemisphere; and is based in Miami, United States.