Miami (August 24, 2020).- The Inter American Press Association (IAPA) condemned the murders of two journalists in Venezuela and urged the government of Nicolás Maduro to urgently clarify the incident in which the regime's public forces are involved.

Journalists Andrés Eloy Nieves Zacarías and Víctor Torres, from Guacamaya TV in Zulia state, were murdered on August 21 at the station's headquarters, during an alleged operation by the Special Task Forces (FAES), a group of National Police Bolivariana (PNB) created in 2016 and whose violent actions have been criticized by international organizations.

The president of the IAPA, Christopher Barnes and the president of the Commission on Freedom of the Press and Information, Roberto Rock, condemned the murders and joined the demand of local organizations to resolve the crime immediately.

The channel director Franklin Torres, father of one of those killed, denounced that FAES agents broke into the station. He asserted that the crime scene was manipulated by placing weapons on the corpses, and the channel's equipment was seized. The official version pointed to a confrontation and they accused Nieves Zacarías, a member of the ruling United Socialist Party of Venezuela, of belonging to a criminal gang.

Barnes, director of The Gleaner Company (Media) Limited, Kingston, Jamaica, and Rock, director of the portal La Silla Rota, Mexico City, expressed their solidarity with the families and colleagues of the murdered journalists, and stressed the importance of knowing the truth about crimes and apply justice.

Conviction of murderer of Mexican journalist

On August 22, a Mexican federal court sentenced the perpetrator of the murder of Miroslava Breach, a correspondent for the daily La Jornada and collaborating with the newspaper El Norte de Chihuahua, to 50 years in prison, which occurred on March 23, 2017.

"We salute the symbolic sentence and we hope that the next step is to judge and punish the intellectual leaders as well," the IAPA directors agreed. They added that, "the conviction sets a positive precedent that should be a benchmark for applying justice in hundreds of unpunished murders against journalists in Mexico."

Federal judge Néstor Pedraza Sotelo considered that Breach, 54, was murdered for her journalistic work on drug trafficking and criminal groups. The sentence fell on Carlos Moreno, alias "el Larry", for the murder of the journalist, who was shot eight times when she was in her car with one of her sons who was unharmed from the attack. 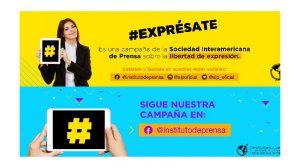