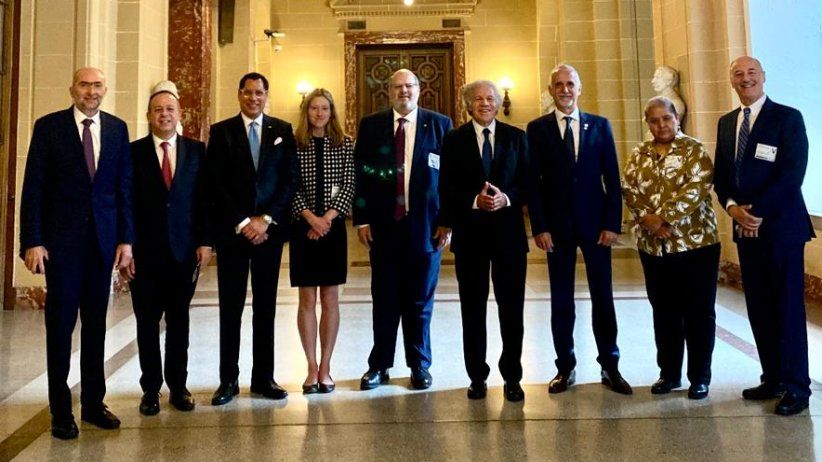 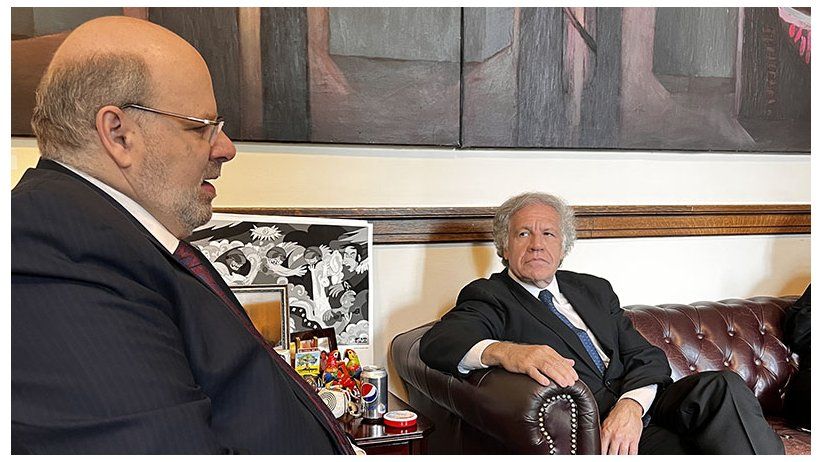 "We are delighted because we have received a good reception for our claims and concerns," said IAPA President, Jorge Canahuati.

Washington, DC (May 27, 2022) – Persecution against the press in Nicaragua, murders against journalists in Mexico, and media sustainability were the axes of a comprehensive and successful plan developed by the Inter American Press Association (IAPA) in the capital of the United States.

For three days, an IAPA delegation led by its president, Jorge Canahuati, visited State Department officials, legislators from both parties, the General Secretariat of the Organization of American States (OAS), permanent ambassadors to that institution, the Office of the Special Rapporteur for Freedom of Expression of the Inter-American Commission on Human Rights, several think tanks and institutions dedicated to human rights, public policies on freedom of expression and economic assistance for professional journalism.

"We are delighted – said Canahuati, CEO of Grupo Opsa, from Honduras – because we have received a good reception for our claims and concerns. We understand that several of the issues raised will be part of the next Summit of the Americas, from searching for solutions to violence against journalists to the severe media sustainability crisis that creates large news deserts, elements that conspire against democracy."

Carlos Jornet, president of the IAPA's Committee on Freedom of the Press and Information, referred to the violence that has claimed the lives of 17 Latin American reporters this year, including 11 from Mexico. In addition, he called attention to the imprisonment and persecution of journalists in Nicaragua and Cuba —which forced a total of 77 communicators and media directors into exile from both countries— and the lack of coherent and efficient public policies to prevent crimes and impunity.

Jornet, the editor of Argentina's La Voz del Interior, highlighted the principles of the Declaration on Nicaragua, a document signed by 27 media organizations and journalists that asks governments to adopt concrete measures to neutralize the systematic persecution of independent journalists from Nicaragua.

Among these measures, the Declaration asks multilateral organizations to condition non-humanitarian economic assistance to Nicaragua until the government releases political prisoners and returns the facilities to La Prensa, Confidencial, and 100% Noticias. Likewise, the Declaration urges the governments receiving the exodus of Nicaraguan journalists to expedite work visa procedures.

At the Capitol and in dialogue with advisory teams from Republican and Democratic senators, the IAPA was interested in the advancement of bills that support journalism. Among them is the "Journalism Competition and Preservation Act" (JCPA) initiative, which enables and promotes mandatory negotiations between the media and the global platforms to agree on a fair price for the news content they generate, as already occurs in Australia several European countries.

The IAPA was also interested in the bill "Local Journalism Sustainability Act", which includes subsidies and tax credits to support small and medium-sized regional media financially, to prevent the economic crisis aggravated by the pandemic from condemning them to disappearance. Likewise, the entity required details on a more recent initiative, Competition and Transparency in Digital Advertising Act, introduced on May 19.

In an open dialogue with a brand-new group of 12 ambassadors before the OAS, called "Friends of Freedom of the Press and Journalism," its leader, the ambassador for Uruguay, Washington Abdala, asked the IAPA to propose concrete measures regarding the sustainability of the media. He considered that media "play an unavoidable role for the democracy of our countries." Abdala shared the diagnosis made by the entity and requested ideas to develop public policies and regulations on the "fair and reasonable remuneration" that the IAPA requires platforms to pay the media for the news content they distribute.

In a meeting with the Secretary General of the OAS, Luis Almagro, the delegation then discussed the aggressive tone that usually characterizes debates on social media and the discrediting government propaganda exercised through them. Almagro was concerned about what he considered the three fundamental attacks against democracy: "the capture of judicial powers and constitutional reforms; attacks on electoral processes and attacks on freedom of expression."

In other meetings, the IAPA delegation references the high degree of volatility of democracies in Latin America. Also, the IAPA emphasized that the government's disinformation campaigns through direct stigmatization and troll farms are used to discredit journalists, the media, and members of the opposition.

"We are facing a perfect storm, in which we can observe the relationship between the weakness of democracies and the closure of the media due to the economic crisis and political attacks," said the president of the IAPA Legal Affairs Commission, Martín Etchevers, director of Grupo Clarín, from Argentina.

The delegation also met with private foundations and US government agencies to explore the feasibility of programs to support professional journalism in Latin America.

In addition to Canahuati, Jornet, and Etchevers, the IAPA delegation consist of Andrea Miranda, editor-in-chief of Grupo Debate Media, Mexico; Sebastián Pastor, executive director of Fundación Televicentro, Honduras; and Ricardo Trotti, executive director of IAPA. In addition, Gilberto Urdaneta, a member of the IAPA Executive Committee, and Lisa Zycherman and Sasha Dudding, of the Reporters Committee for Freedom of the Press (RCFP), participated in some of the meetings.