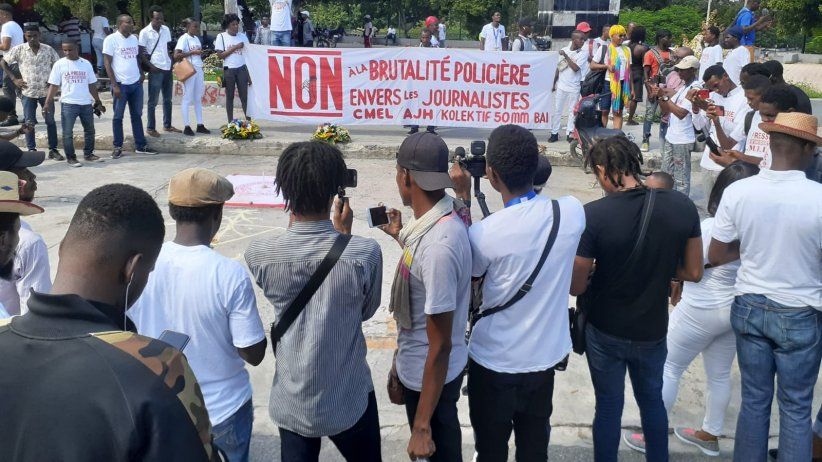 Eight of their colleagues have been killed this year

By Javier Valdivia, special for the Inter American Press Association

Miami (November 13, 2022) - Dozens of journalists marched in white on Sunday through Haiti to denounce the murder of eight of their colleagues this year and demand the country's authorities clarify each case.

The demonstration began in Champ de Mars, in the center of Port-au-Prince, and culminated at a police station in the commune of Delmas, east of the city. On that Sunday, October 30, reporter Romelo Vilsaint died of a bullet in the head while protesting the arrest of another colleague, Robeste Dimanche, who was later released.

"We are here to denounce police brutality against journalists and to ask the police inspectorate general to follow up on the file related to the murder of journalist Romelo Vilsaint," lawyer Arnel Rémy told the AlterPress agency, one of several local media covering the activity.

The journalists also reminded the authorities of the warning of the Colectivo de Medios en Línea (CMEL), the organizer of the march, that members of the organization would cover no press conference by the police if the institution refuses to inform about the results of the investigations.

The CMEL filed a complaint with the Port-au-Prince Prosecutor's Office against the officers accused of Vilsaint's murder last week. It was initially reported that a tear gas bomb hit him. Still, Gary Desrosiers, a police spokesman, confirmed to the Associated Press that the reporter died of a "fatal gunshot" during "an unfortunate situation."

The following day, the police announced the opening of an investigation. The government lamented the death of the journalist, a permanent correspondent in the Haitian capital of Radio Génération 80, based in the town of Port-de-Paix, in the northwest of the country.

Eight journalists were murdered or killed in 2022, victims of violence in Haiti, a country facing a severe security crisis caused by the actions of armed gangs, anti-government protests, and the excessive use of police force.

In addition to Vilsaint, the most recent death was that of journalist Fritz Dorilas. According to local media, he died on November 5 in the Tabarre commune, northeast of Port-au-Prince, when armed individuals shot near his home during gang clashes.

However, the online portal Alaminute.Info reported that Dorilas, co-host of the program "The law, the law and justice" on radio Megastar, was forcibly taken from his home located in the Carradeux sector and then executed nearby as the shooting was taking place. The police have not yet confirmed the cause of death.

A resolution on Haiti, approved by the Inter American Press Association (IAPA) during its 78th General Assembly in Madrid, stressed that the climate of violence and the political, economic, and security crisis in which the country is immersed keep journalists in a situation of defenselessness and high risk.

The IAPA called on the government to guarantee the preservation of freedom of expression and the free and safe exercise of journalism and urged the press organizations of the Americas to express their solidarity and support for journalists and media outlets that continue to carry out their informative mission despite the high-risk circumstances.