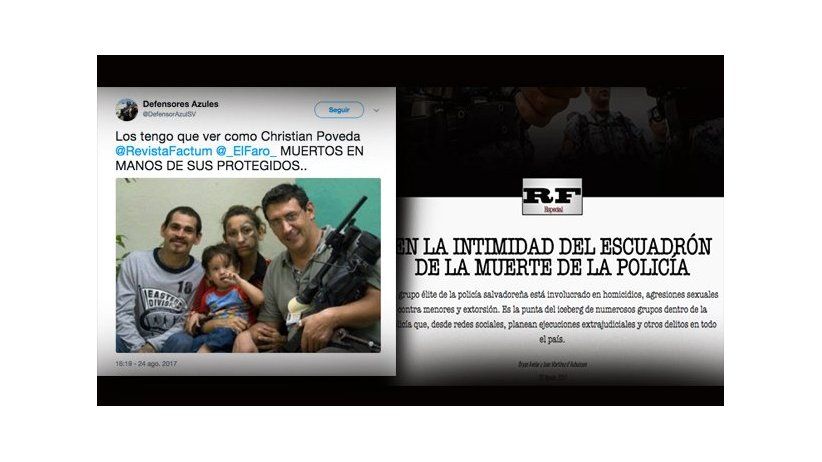 Photo from Twitter by César Fagoaga, co-editor of Revista Factum.

Intimidation against journalists of Revista Factum and El Faro, after they published investigations that revealed the participation of policemen in unlawful executions.

MIAMI, Florida (August 29, 2017)—The Inter American Press Association (IAPA) today condemned and expressed deep concern at threats and acts of intimidation against journalists of digital media in El Salvador Revista Factum and El Faro, after they published investigations that revealed the participation of policemen in unlawful executions.

One of the threats, presumably coming from a group within the police force, made through the Twitter account called "Defensores Azules" shows an image with the caption "I have to see you like Christian Poveda @RevistaFactum @_ElFARO dead at the hands of your protectors...".

Poveda, a French-Spanish cameraman, was murdered on September 2, 2009 in San Salvador by members of a gang following the filming of a documentary on gang violence. Similar threats were also made on Facebook.

The chairman of the IAPA's Committee on Freedom of the Press and Information, Roberto Rock, urged the El Salvador authorities "to act firmly, seriously, as soon as possible and guarantee the physical safety of the journalists intimidated for carrying out their work in an effective manner."

On August 22 Revista Factum magazine published the journalistic investigation titled "In the privacy of the police death squad". For three months it monitored two chat groups on Whatsapp made up of more than 40 policemen that disclose internal communications and extermination group crimes in the police.

For its part the portal El Faro has published in various investigations held in July 2015, February 2016 and March 2017 how police agents murdered a total of 14 people in three different operations, in alleged "confrontations" with gangsters.

The daily newspaper La Prensa Gráfica also has been denouncing in recent years the participation of policemen in unlawful executions.

Rock, editor of the Mexican news site La Silla Rota, expressed the IAPA's solidarity with and support of the journalists of the two media outlets and reminded the El Salvador government of "its duty to protect the safety of the journalists and to severely punish those who restrict freedom of expression and of the press."

A Revista Forum editorial criticized "the coolness of the authorities' reaction" to the denounced threats and it made the government responsible for any attack upon the physical integrity of its journalists or that of the El Faro colleagues.

On August 26 four individuals arrived in a vehicle at the magazine's offices, identifying themselves as members of the Attorney General's Office for the Defense of Human Rights, and asked a guard if there was anyone in the offices and about the journalists' working hours. The Attorney General's Office denied that it had sent its staff to the magazine's offices.

"We are certain," the editorial stressed, "that what we do as journalists in Factum and El Faro is correct: denounce criminals, hypocrites and those that abuse their power. To continue doing so is our commitment."

Last week the IAPA announced that it will grant as part of its awarding of excellence in journalism two honorable mentions to Revista Factum in the news coverage category for the investigation by reporters Héctor Silva Ávalos, Bryan Avelar, Salvador Meléndez and César Castro Fagoaga, concerning a major corruption network in El Salvador that produced, throughout the year, several journalistic pieces concerning corruption in the national Attorney General's Office.

Also to receive an honorable mention, in the features category, is journalist Bryan Avelar of Revista Factum for his story "El escuadrón cazapandilleros" (The gangster-hunting squadron).