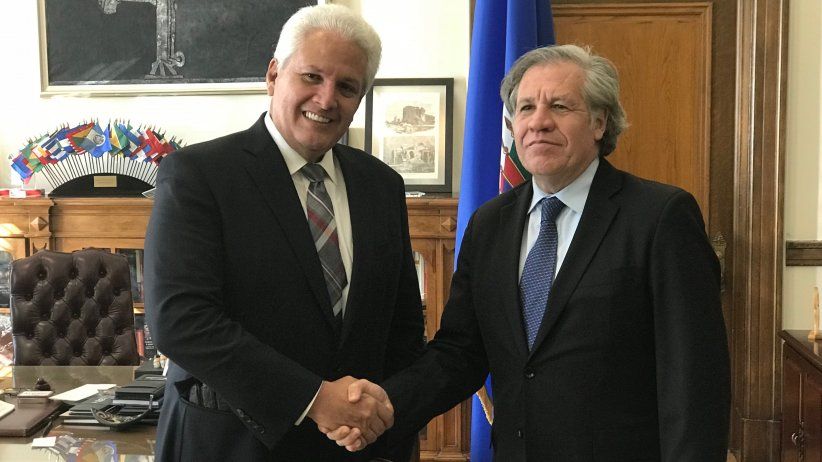 Meeting with Jeff Lowenstein, head of the office of the Democratic congressman for California, Adam Schiff. (Photo Ricardo Trotti - IAPA) 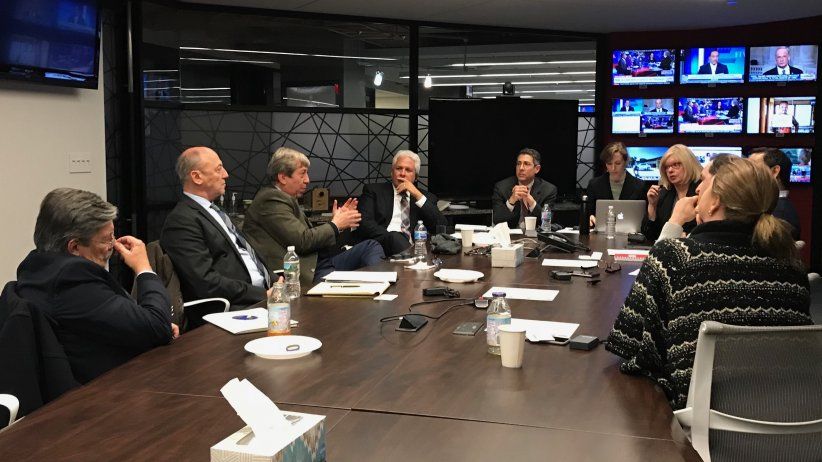 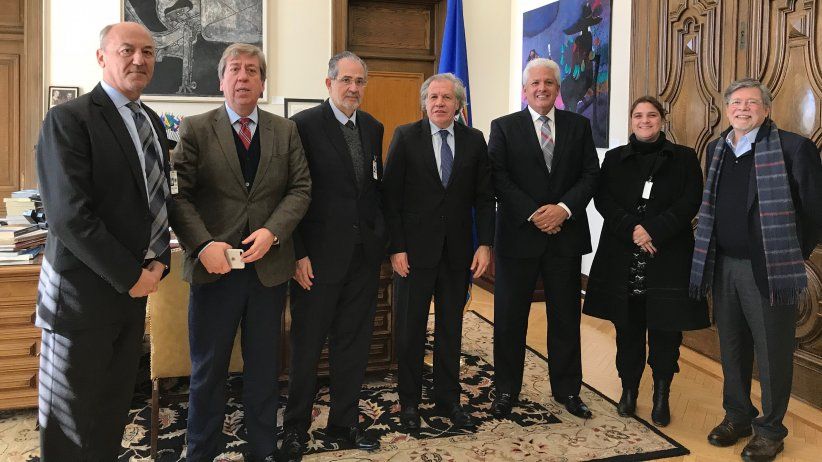 Weakening of press freedom in the US worries

Washington D.C. (February 7, 2018) - A joint mission of the Inter American Press Association (IAPA) and the Reporters Committee on Freedom of the Press (RCFP) stood out in this city to listen in situ to concerns about the weakening of the freedom of the press and of expression, as a result of the persistent antagonism that President Donald Trump maintains with the most exalted media and journalists in the country.

The delegation, led by IAPA President Gustavo Mohme, maintained an intensive agenda that included meetings with legislators, judges, former officials, academics, opinion leaders and journalists. The purpose of the mission was to identify whether President Trump's incendiary rhetoric has direct consequences on journalistic work or could lead to a climate of self-censorship affecting the public's right to information.

While there are not many concrete facts that demonstrate that rhetoric is giving way to a conditioning of press freedom, there is consensus on a rare climate that affects journalism. Mohme, director of La República, Lima, Peru, also considered that in the US these liberties can hardly be broken, due to the independence and balance of powers, as well as the First Amendment, natural antibodies that guarantee freedom of the press.

However, the IAPA put the Latin American experience in perspective in the different interviews. On the one hand, it showed the experience of other political contexts in Latin America - Venezuela, Argentina, Nicaragua, Ecuador - in which anti-press political harangue was the first phase adopted by authoritarian governments to deteriorate public institutions. On the other hand, Mohme and Luis Almagro, the executive secretary of the OAS, agreed that the weakness of press freedom in the US, the historical frame of reference in the matter, could generate "collateral effects", spreading similar situations in other countries.

In particular cases, the IAPA - RCFP delegation expressed its concerns about Trump's statements that, although they are part of the political discourse, try to confuse and generate greater discredit on media. It's not only to label big media such as the New York Times, the Washington Post, CNN, among others, as "enemies of the people" or to award them prizes for their "false news", but to his constant preaching in favor to reform the defamation laws to demand more easily the critical media and journalists; avoid questions or block "awkward" journalists at press conferences; pursue whistleblowers within the government or journalists who do not want to disclose their sources; request to not renew operating licenses for the NBC network or deny the merger of Time Warner with ATT for reasons that may be more political than technical.

In this regard, Commissioner Jessica Rosenworcel of the Federal Communications Commission, told the delegation that the autonomy and historical guidelines of the agency would not allow a license no to be renewed, which occurs every eight years, by political directives or by content qualification. However, she emphasized that the danger of press freedom in the US is due to the advancement in the consolidation of media, which has been supported by recent policies of her organization, since has eliminated barriers on cross-ownership of the media in the same community.

Senator Amy Klobuchar (Democrat for Minnesota) told the delegation that President Trump's rhetoric also upsets the political class and will continue to pressure the Justice Department to ensure that journalists do not take legal risks to maintain the anonymity of their sources. He also referred to a bipartisan bill that will force digital companies to be more transparent and have records about advertising, in clear allusion to the "false news" generated by Russian trolls on Facebook and Google that have affected past elections.

The executives and journalists of CNN, Ramon Escobar, Antoine Sanfuentes and Evan Pérez, said they feel threatened by the presidential rhetoric. Having been the target of public discredit, blocked from asking at press conferences and publicly stigmatized by the President, they showed fear that they encouraged bad behavior. They gave an example that the staff of the chain at the Atlanta headquarters received several death threats last week and that leaders from other countries emulate Trump calling their investigations "false news".

They also said that the positive aspect of this environment is that journalism returned to its principles and more than ever insists on the quality of coverage. They explained that CNN initiated its Facts First project both in its coverage and in public education campaigns.

The New York Times journalist, Charles Savage, explained that beyond Trump, it must be remembered that in the Barack Obama government, press freedom was compromised. He referred to eight cases of journalists imprisoned for not revealing their sources and the difficulty of accessing official sources of information. The experienced journalist Marvin Kalb has a more apocalyptic vision about Trump's rhetoric, especially when the president calls the press "enemies of the people." Considers that the discredit to the media, erodes the climate of freedom of the press.

In meetings that the delegation held at the Capitol in the offices of Senators Jeff Flake (Republican from Arizona); Richard Blumenthal (Democrat for Connecticut) and Marco Rubio (Republican for Florida) as well as in the office of Deputy Adam Schiff (Democrat for California) and leader of the Press Freedom Caucus, there were coincidences that incendiary speech is a distraction to solve the essential problems, but the defense of press freedom remains an essential framework of American tradition and democracy. It was argued that the Congress maintains its institutional space to enforce laws and the Constitution and defend the work of the media and journalists.

In Senator Rubio's office, the IAPA recalled its position on Cuba, in which it exhorted in four meetings prior to the State Department and in a letter to President Trump that "in all bilateral relations must be placed on the agenda the fulfillment of the freedom of expression in Cuba." The delegation reported on the disappearance of the independent journalist, Raúl Velásquez, on February 1 in Cuba, and asked for collaboration in this regard.

The IAPA also asked the deputy Schiff, to transfer to Congress the request that the Inter-American Human Rights System be financially supported, particularly the Special Rapporteur for Freedom of Expression, after the Executive cut funds for these type of organizations. IAPA said that this office plays an important role in the region.

Previously, in a meeting with the special rapporteur, Edison Lanza, the IAPA delegation announced the need to seek a public hearing to discuss the situation of press freedom in the US. Mohme said we need a "common space that allows us to sit down with the State Department and reflect on the best ways to support and respect the work of American journalists." The IACHR hearings will be held in May in Santo Domingo.

In addition to Mohme, the delegation was made up of the executive director of RCFP, Bruce Brown, and lawyers Sarah Matthews and Rick Plum of that entity. IAPA was also represented by Roberto Rock, president of the Committee on Freedom of the Press and Information, director of La Silla Rota, Mexico; Marcel Granier, president and CEO of RCTV in Venezuela; Marcela Noble, Grupo Clarín, Buenos Aires, Argentina; Anders Gyllenhaal, editor and director of leadership development at McClatchy, Washington, DC and Ricardo Trotti, IAPA's executive director.